Connect your Dynatrace environment to ServiceNow

To connect your Dynatrace monitoring environment to your ServiceNow instance, configuration is required on both sides, ServiceNow and Dynatrace. The following 5 steps are mandatory for a fully operational integration.

1. Install the Dynatrace app from the ServiceNow store

Go to Dynatrace profile in the ServiceNow application marketplace, select Dynatrace integration app and install it within your ServiceNow instance.

2. Activate the Configuration Management for Scoped Apps plugin within your ServiceNow instance

Activate the Configuration Management for Scoped Apps plugin within your ServiceNow instance.

To allow Dynatrace to report discovered CIs into your CMDB you must create a new discovery data source called DYNATRACE. Perform the following steps:

To complete the configuration on the ServiceNow side:

You'll need an API key for proper integration between Dynatrace and ServiceNow. If you don't already have the API key (token), you can generate it in Dynatrace.

To create an API key for your Dynatrace environment:

After installing and configuring Dynatrace integration on the ServiceNow side, switch over to your Dynatrace environment. 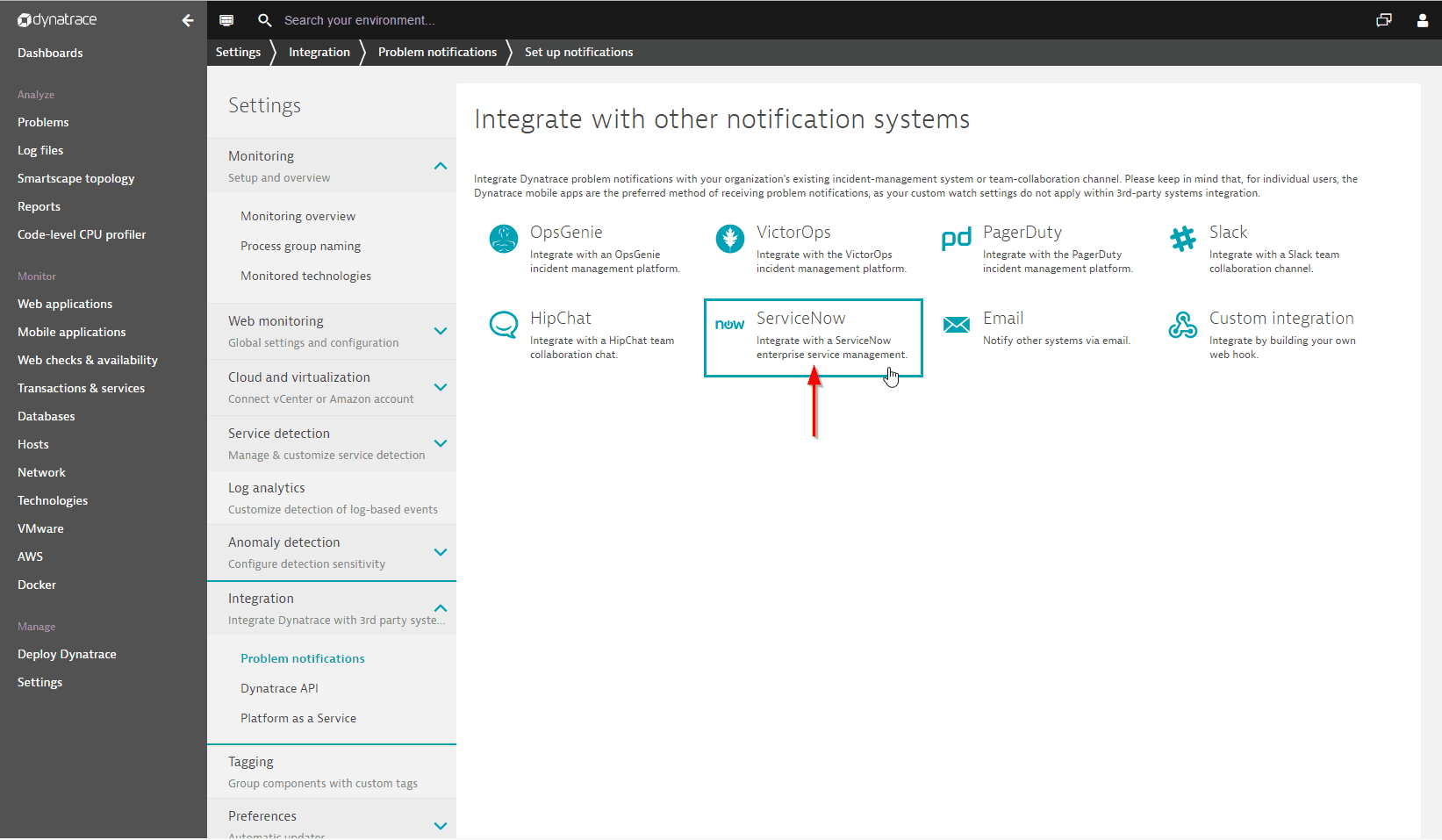 If you're running a ServiceNow instance within your own domain, use the domain of your instance instead of the instance identifier. 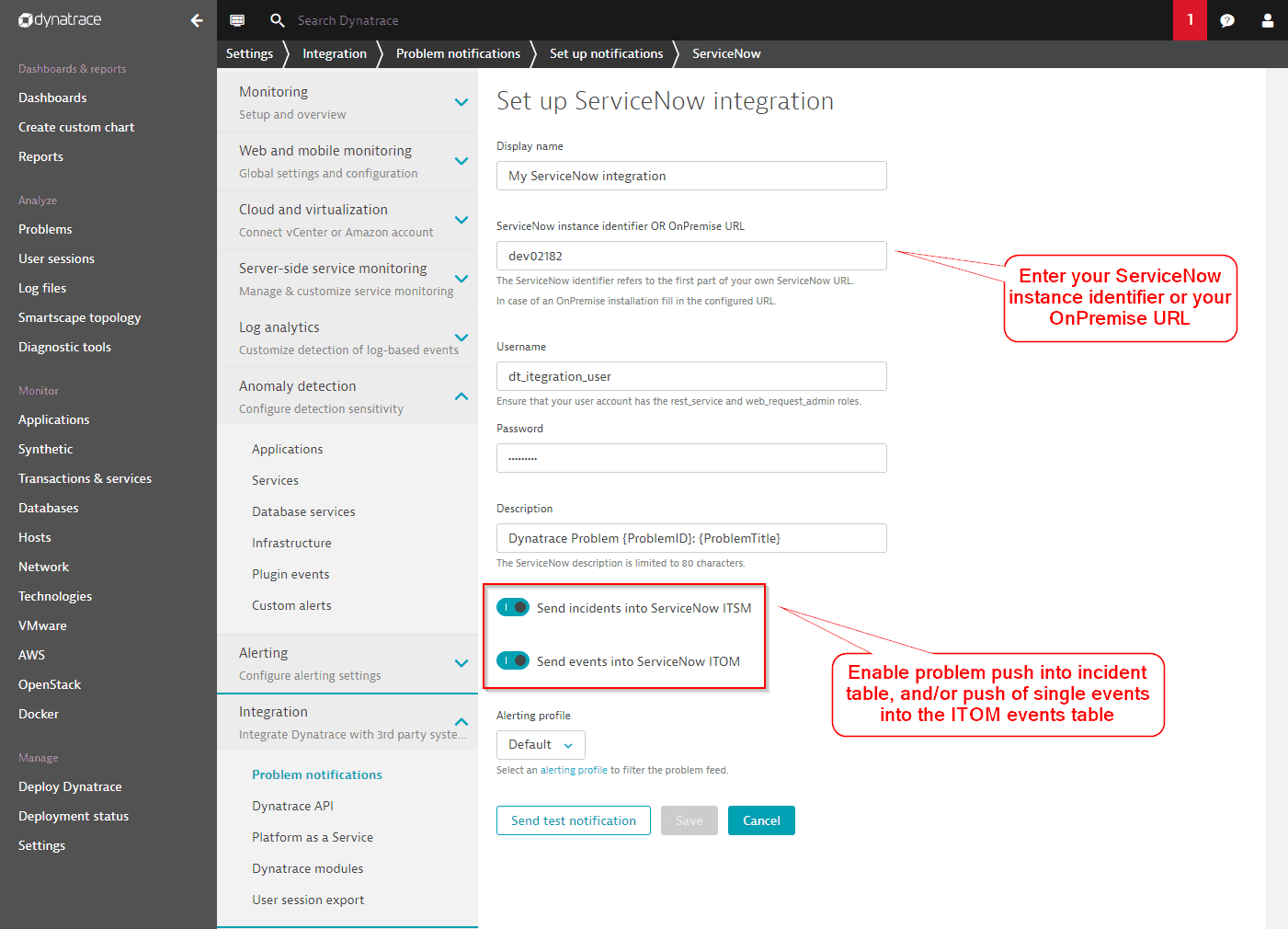 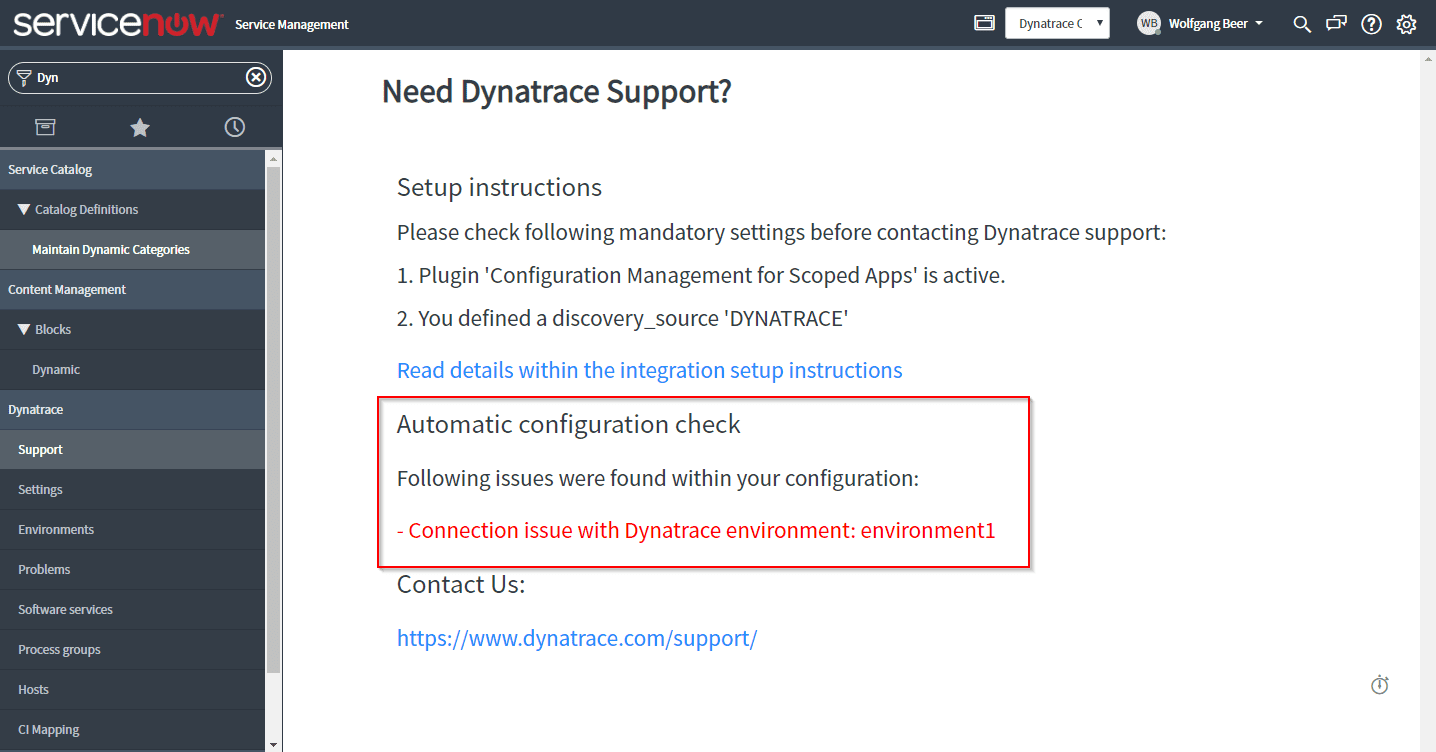 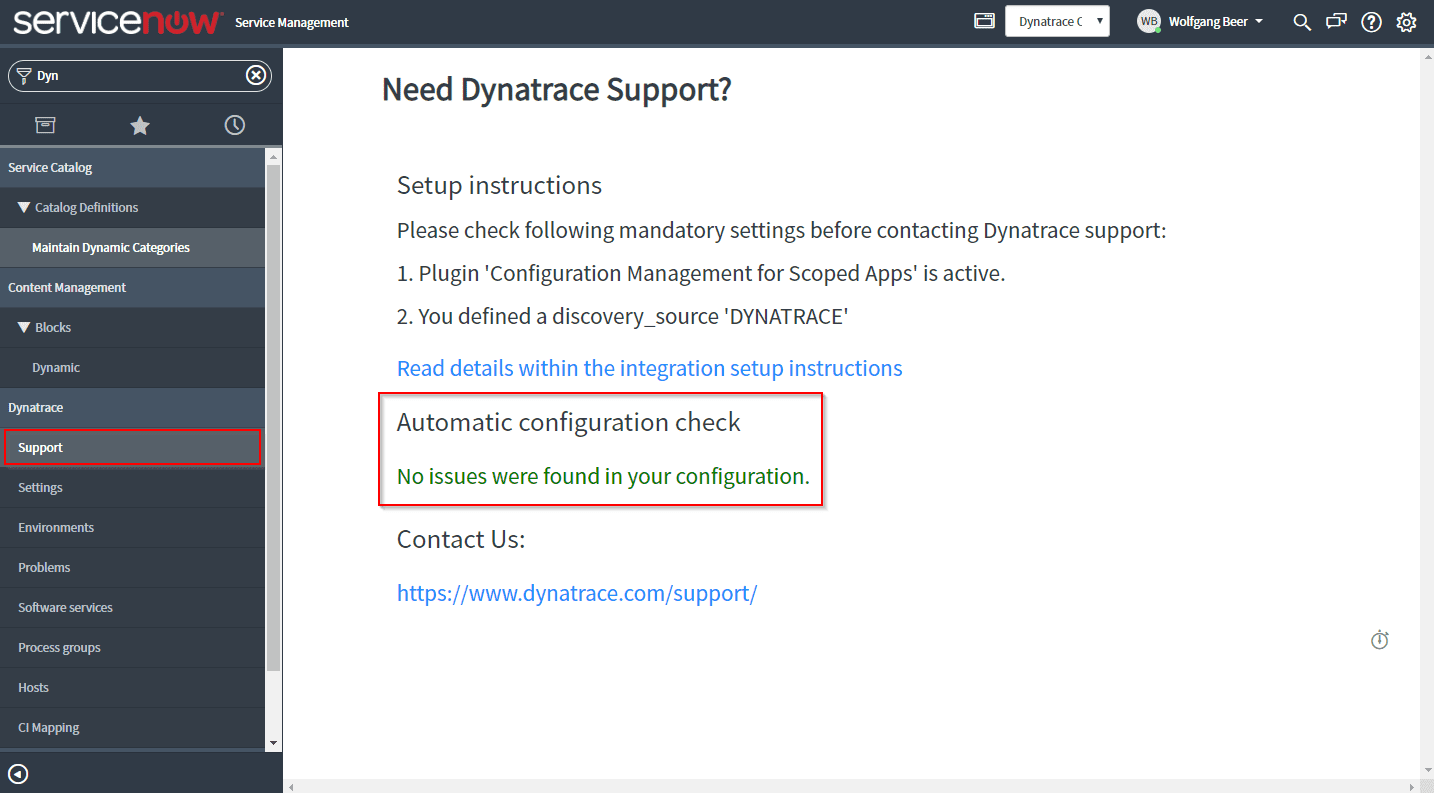 You can customize the short description texts of the problem-notifications that are sent out by defining a text template that includes placeholders that are dynamically populated with relevant problem details, such as problem ID, problem impact, or problem state. By default, the full HTML formatted description of each detected problem and a direct link to the corresponding Problem details page in Dynatrace is attached to each ServiceNow incident in the form of a comment.

By using the toggles for sending incidents and/or ITOM events, you can control when Dynatrace should automatically create an incident within the ServiceNow ITSM module and if all individual correlated events should be pushed into the ServiceNow ITOM events API. Keep in mind that the integration will fail if ITOM is enabled but not activated in your ServiceNow instance.

After configuration is complete on both the sides, Dynatrace as well as ServiceNow, problem notifications are pushed from Dynatrace to your ServiceNow instance, as shown below: 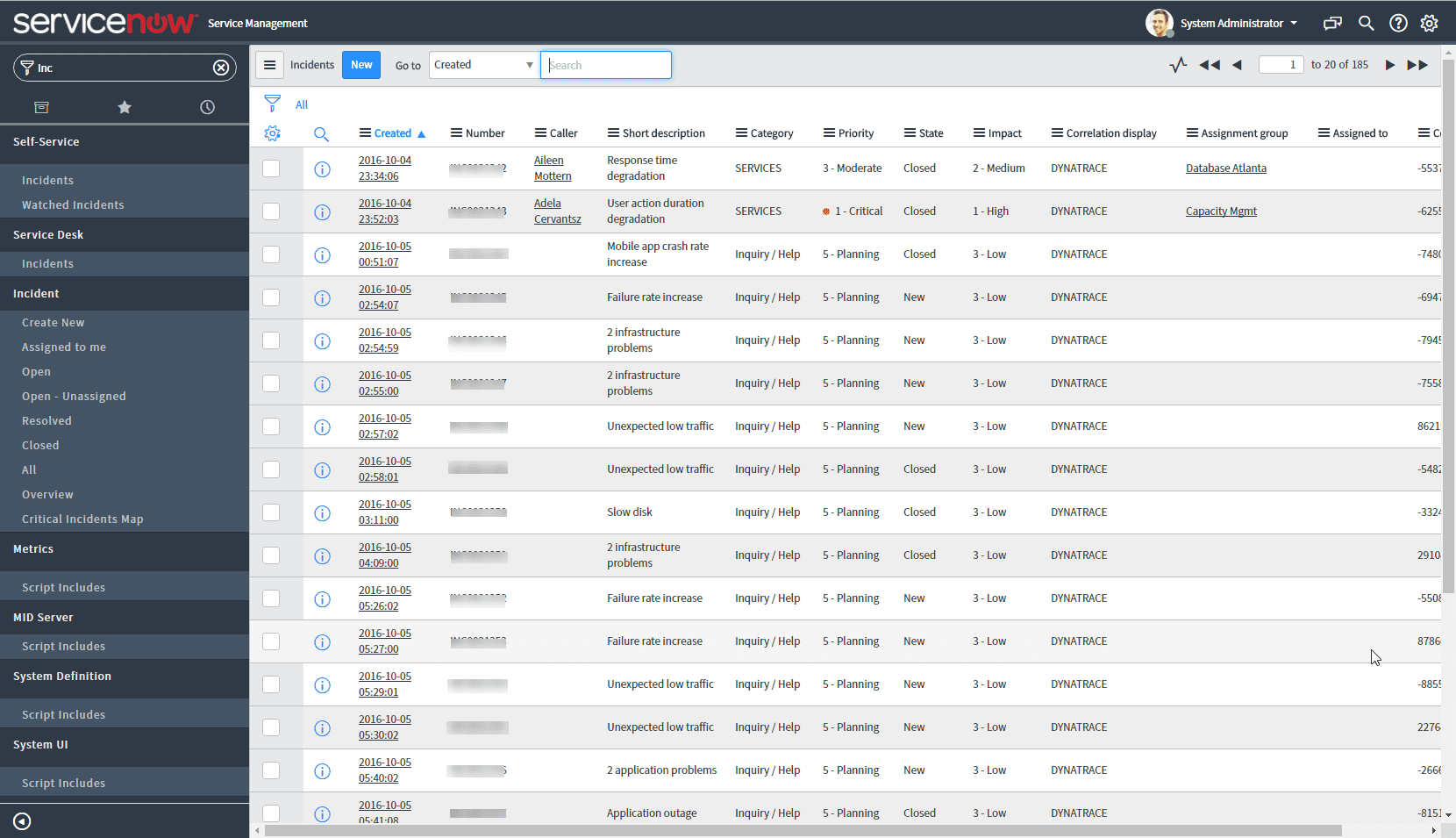 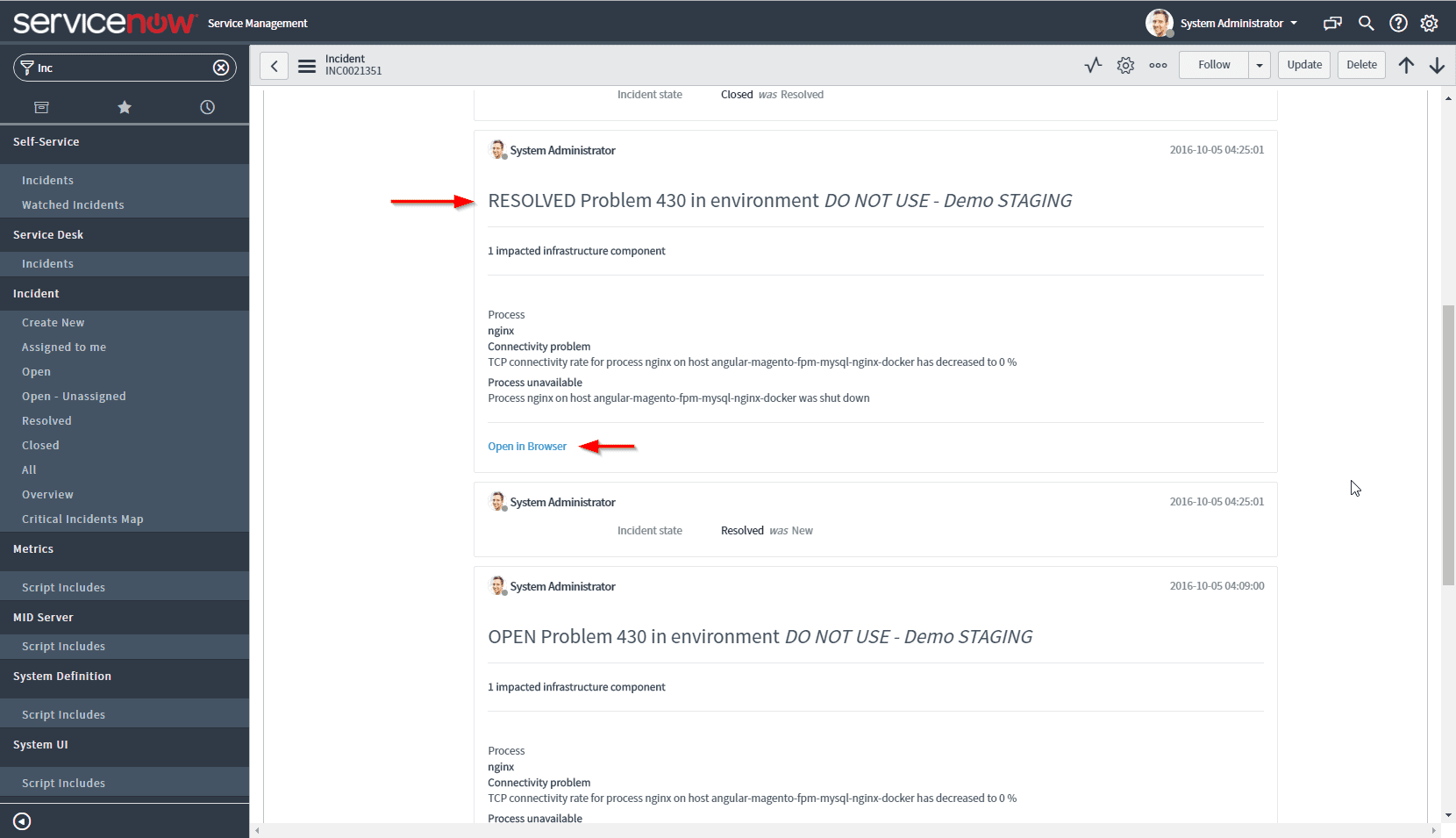 If the ITOM module is enabled within your ServiceNow instance, Dynatrace can also act as an ITOM event source. After you've enabled the push of ITOM events on the configuration page, all events within a Dynatrace-detected problem are automatically pushed into the ITOM event API. Each host-based event has the correct node name and node IP attached as well as important severity information within the additional information field. ServiceNow ITOM users can create event filters and alerting rules to flexibly react to incoming Dynatrace-detected events. Each of the events contains the unique Dynatrace identifier (for example, HOST-B66B773D12C49189) within the field correlation_id. If the default ITOM CI mapping isn't able to match a CI by its node name, this correlation_id is used to automatically map detected CIs. 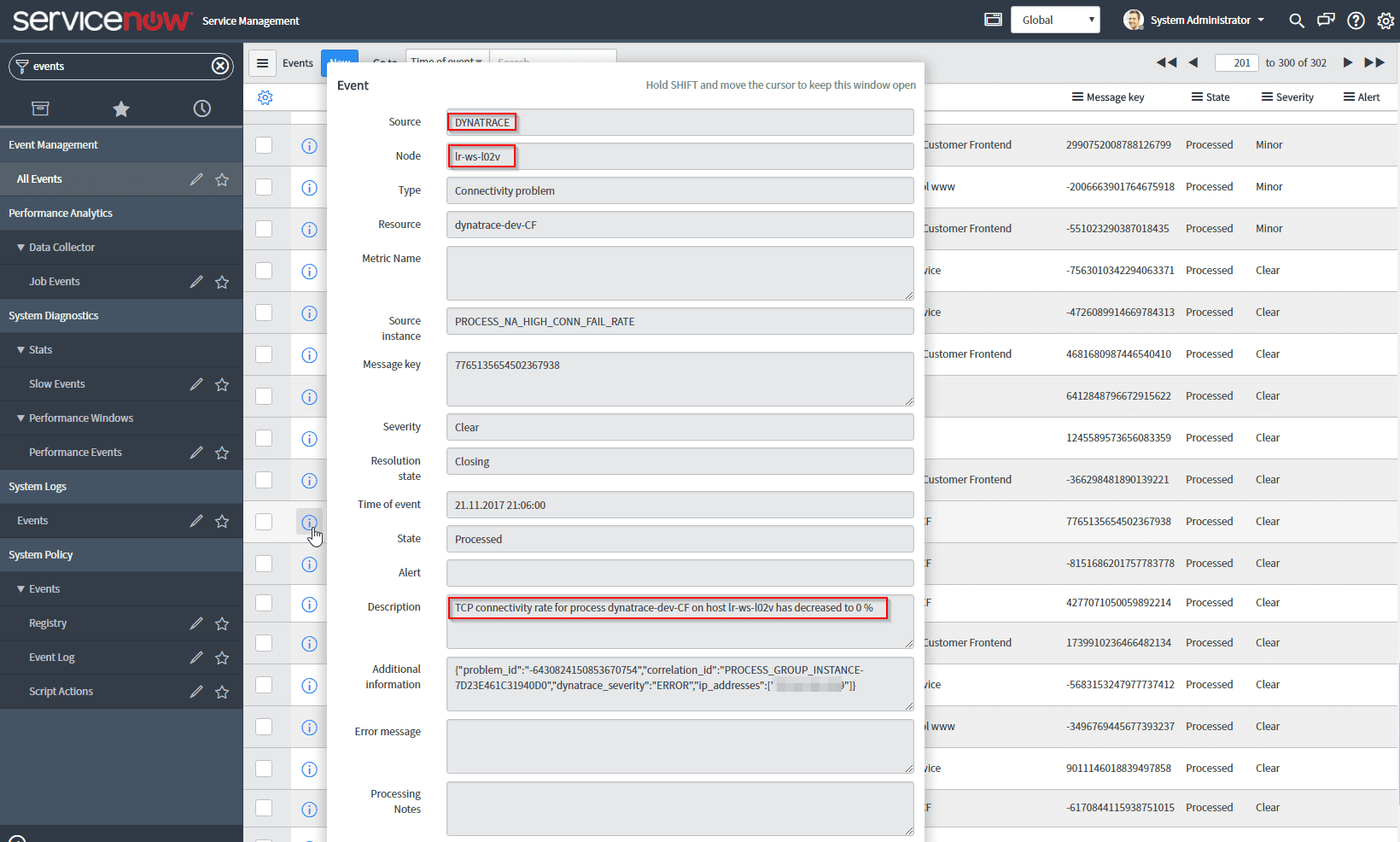 After you've installed the Dynatrace app within your ServiceNow instance, you’ll find a new Dynatrace menu in ServiceNow with the following entries:

Simply select one of your configured MID servers in the Dynatrace > Settings > Environments section of ServiceNow.
You can even define different MID servers for individual Dynatrace environments.

How do I get Dynatrace-detected hosts, process groups, and services to show up in the CMDB?

To allow Dynatrace to report discovered CIs in your CMDB, create a new discovery data source and name it DYNATRACE. Perform the following steps:

If the hosts, process groups, and services still don't show up in the CMDB, check the ServiceNow system log for error messages within the identification engine. Most likely, it's a non-standard CMDB type attribute that has been defined as a mandatory field.

Why aren't my Dynatrace-monitored servers showing up in the CMDB?

When Dynatrace-monitored servers aren't showing up in the CMDB, confirm that:

How do Dynatrace\-detected processes synchronize?

Which Dynatrace IP addresses must be whitelisted for ServiceNow integration?

For your Dynatrace instance to communicate with ServiceNow, you must provide ServiceNow with a list of Dynatrace IPs that will be permitted to send information to ServiceNow. Dynatrace servers are distributed throughout various regions. The best way to ensure that you get the right IP addresses for your region is to look up the IP addresses by running the nslookup command. If you don't yet have a Dynatrace environment, you must first create your environment in Dynatrace and then execute nslookup from the command prompt. For example:

Review the OneAgent download page to see the IP addresses for your region. 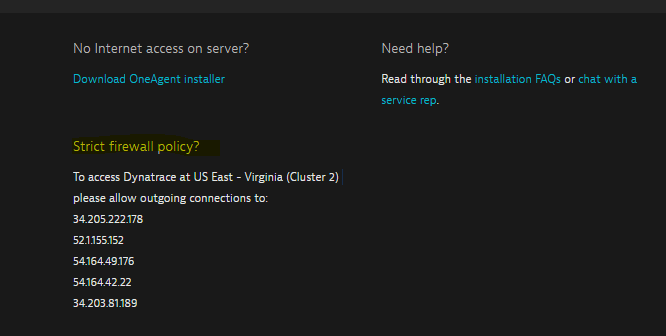 Which ServiceNow tables are filled by the ServiceNow Dynatrace application?

Which scheduled jobs are introduced to pull the CMDB information from Dynatrace?

Can I change the table or field to where Dynatrace pushes the data?

Incidents are imported through an import set table. You can reconfigure the default transformation map Problem to Incident Transformation Map to route the information to different tables or fields.

Can I synchronize additional information, or even metrics?

Deduplication is done through ServiceNow CMDB Identification and Reconciliation. Custom CI identification rules are used to merge identical CIs based on a given attribute (for example, host names).

How do I fix an `HTTP 403 Forbidden Access Restricted Not Authorized Error` when sending a test notification?

If you receive a UI error when running a test notification for ServiceNow that says HTTP Status 403 - Access restricted ([IP Address] not authorized), you'll need to add the following IP addresses and the ones listed in the error to your ServiceNow whitelist:

For information about whitelisting IPs in ServiceNow, please refer to ServiceNow documentation.

How can I ensure that incidents are correctly created?
Why do events not show up in the ITOM events table?

This can happen because of the following reasons:

What should I do when an incoming incident isn't mapped to the affected server with the CMDB?
What should I do if application services don't show up in the ServiceNow instance?