A user action is an interaction with the web browser that involves a call to a web server, which can potentially have multiple nested calls.

A user action can be a load action, an XHR action or a custom action. The key difference among these action types is the way action duration is calculated and that for each type there are different metrics available.

The action duration in this case is the time required for the complete load action. More specifically, the start time of the user action begins with the W3C navigationStart time, if available. If not available, the start time begins when the Real User Monitoring JavaScript code is initialized in the browser. The end time is when the last onload handler has completed its task. The onload handler is an event handler in JavaScript that's used to call the execution of JavaScript after a page, frame, or image has completely loaded. If any XMLHttpRequests (see XHR actions below) are started by an onload handler, the user action ends when the XMLHttpRequest is complete. 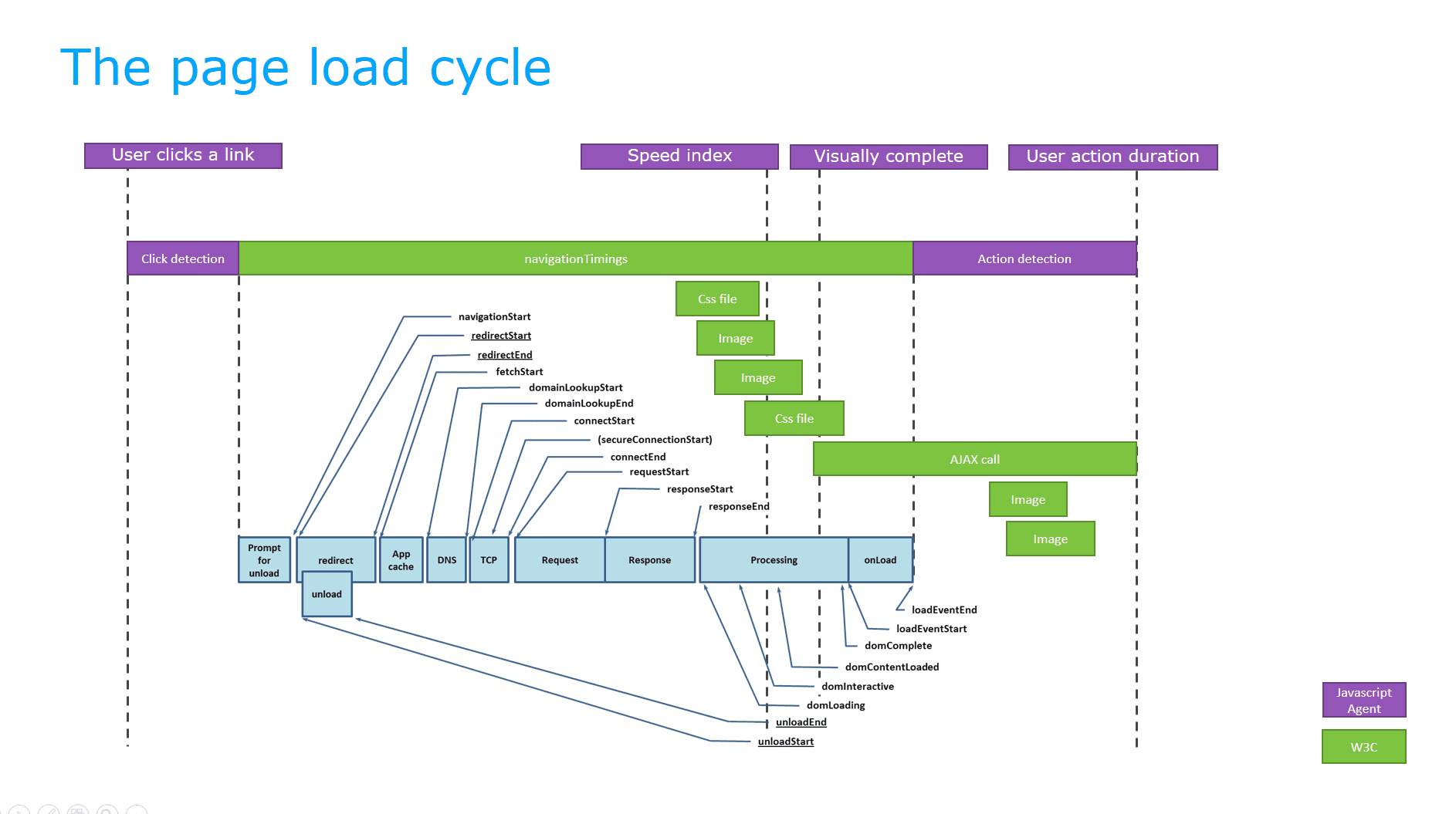 The following measures are used to chart the duration of specific steps in the load action process.

Most modern applications, including single page applications, rely on a single load action that downloads the framework and initializes the page. After that, the DOM of the page is changed via JavaScript and all communication with the web server is done via XmlHttpRequest or via fetch().

Dynatrace continuously tracks user interactions with each page. If user interaction leads to XmlHttpRequests or fetch() calls, an XHR action is created. Dynatrace also detects if there are additional XHRs triggered in the callback of the initial XHR and so on. In this case, Dynatrace waits until all requests are finished. By monitoring the DOM, Dynatrace can also identify resources that were added in the callbacks. Dynatrace then waits until those resources have finished downloading before ending the action.

An XHR action starts with the user's click on a control on a web page. All metrics are calculated in relation to this point in time and are based on the initial XHR that triggers the user action.

The Fetch API provides an interface for fetching resources (including across the network). It is similar to XMLHttpRequest, but the API provides a more flexible feature set. The generic definitions of Request, Response and other network request objects in Fetch allow them to be used at any time they are needed, whether it’s for service workers, Cache API, or anything that handles or modifies requests and responses. Fetch also supports the Cross Origin Resource Sharing (CORS).

User actions based on the Fetch API appear in Dynatrace as XHR actions. You can configure Dynatrace to automatically detect and capture Fetch API request information.

Rather than relying on default user action generation, you may want to fine-tune your Real User Monitoring by adding additional user actions directly into your application’s HTML. This can be useful if our automated user-action generation doesn’t catch specific actions or you want to introduce specific fine-grained timings into your application monitoring. For example, you could measure how long it takes to open a JavaScript-only drop-down menu, or measure the duration time of some JavaScript code. To define custom actions you can use the JavaScript API for Real User Monitoring.

Dynatrace automatically removes certain common sessionid tokens from user action names (for example, jsessionid for Java containers, the default sessionid for PHP, and CFID and CFTOKEN for ColdFusion). Nonetheless, there are numerous session ID variations that may be present in your environment. If Dynatrace doesn't automatically recognize and remove session IDs from certain user action names you encounter, you'll need to configure custom naming rules for those user actions.

Dynatrace tries to assign meaningful names for actions. To do this, it checks several action properties, such as inner HTML, caption, and hint, of the HTML element that triggers the action. This element can either be a button or an anchor. It also tries to get the caption if there's a more complex HTML structure with multiple nested tags.

If the standard action name detection doesn't serve your purpose, you can set the data-dtname custom attribute within the HTML tags and use it as a caption. For instance, the following action:
<label for="txtFirstname">Firstname</label> <input data-dtname="Firstname Text Input" type="text" value="firstname" name="firstname" title="Firstname" id="txtFirstname" /> can be assigned the following caption:
click on "Firstname Text input"

The RUM JavaScript code uses several techniques to decide the name that best fits an action. It starts with the innermost HTML node that is clicked, such as a button, an image tag, or a link, and checks the following in the order of precedence:

If none of these return a reasonable result, the JavaScript code starts applying a recursive algorithm that checks different things depending on the nodeName of the currently checked HTML node. If nothing is found, the parent node is checked.

Most applications, both web and mobile, include user actions (for example, signups, checkouts, and product searches) that are particularly important to the success of your digital business. Such key user actions might take longer to execute than others or they might have the requirement to be of shorter-than-average duration.

With the key user action feature, you can customize the Apdex thresholds for each of these user actions. You can use this feature to monitor key actions with a dedicated dashboard tile and track historic trends.