Dynatrace detects which processes are part of the same process groups by means of a default set of detection rules.

Simple process-group detection rules are only effective when OneAgent is installed on your hosts or images for processes that can be deep monitored.

Note: This feature can only split a process group into multiple parts. Use it if you have different deployments into the same process group.

To create a simple detection rule in the Dynatrace web UI

Suppose you have two nearly identical Apache HTTP server deployments that reside within the same deployment directory but on different hosts. By default, Dynatrace can't distinguish between the two deployments because they don't have any unique characteristics that can be used for identification. Now consider the following rule: Apache process identified by environment variable MY_PG_NAME.

Advanced process-group detection rules are only effective when OneAgent is installed on your hosts or images for processes that can be deep monitored.

To create an advanced detection rule in the Dynatrace web UI

When to enable this option

Suppose you have a process group with multiple processes. Each process simultaneously performs the same function for different customers who are using your application at the same time. While each process instance has the same name, each instance runs off a unique customer-specific configuration about which Dynatrace doesn’t have any information. Dynatrace therefore aggregates all related processes into a single process group in order to facilitate monitoring.

For cases where such grouping is inadequate, you have the option to define process-group detection rules that take into account customer-specific details. Such details can be drawn from your unique deployment scheme. If you have a directory structure that includes a customer ID (for example, /opt/MyCustomerBasedApp/<CustomerId>/Service/MyService), and the directory structure is the same across all your hosts, you can create a customer-specific process-group detection rule that works across all process instances. 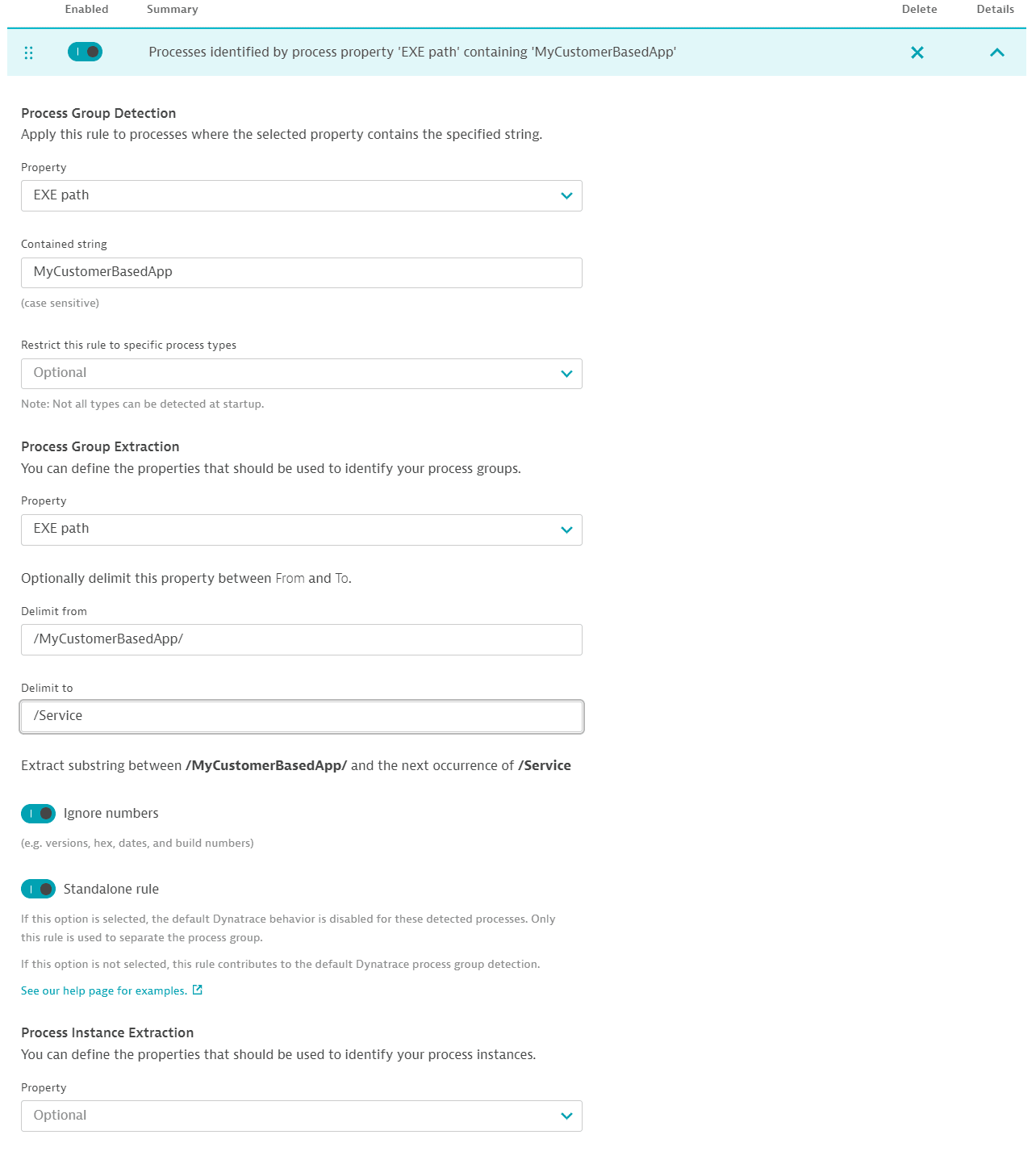 When to disable this option

You can disable the Standalone rules option when, within the same environment, you want to differentiate between separate entities (for example, production vs. testing). In this case, you may want to use the default detection by Dynatrace, but enhance it with your own knowledge of the deployment setup.

You have the option to define a second property that identifies specific process instances (or cluster nodes) within a process group. This is useful if your process group setup has specific names per instance. If you're not sure, leave the field empty. The default setting is one node per host. 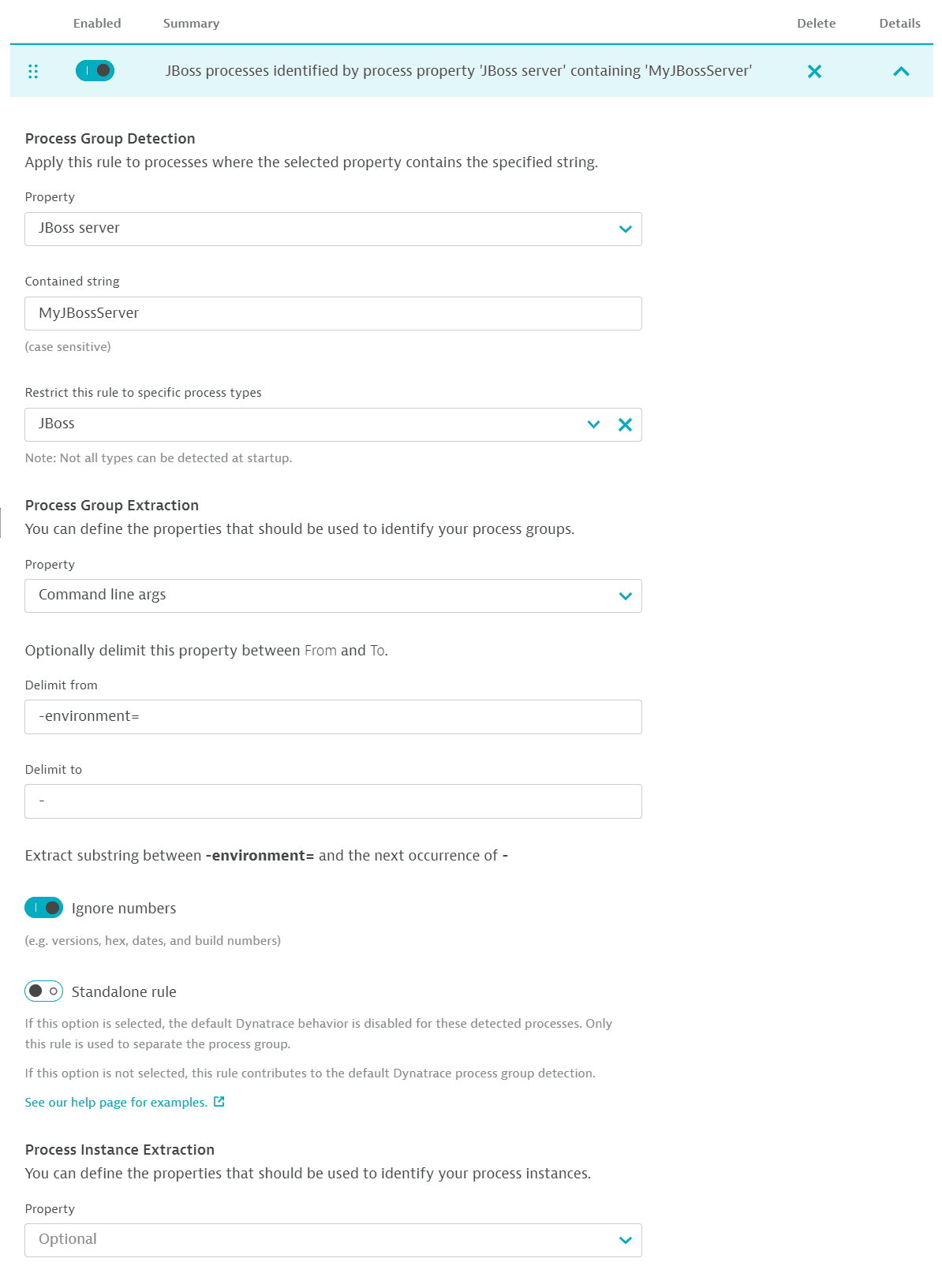 Within large, dynamic environments, the number of processes running on your hosts can become overwhelming. For this reason, Dynatrace automatically monitors important process group types—process groups that are either of a known technology or that consume significant resources.

However, Dynatrace also provides the option of monitoring specific processes that fall into neither of these two categories. This means that you can monitor processes of a technology type unknown to Dynatrace that don't consume significant resources.

Declarative grouping works only for processes that aren't deep-monitored.

To create a process group using the Dynatrace web UI

Note: Dynatrace automatically assigns names to detected process groups of unrecognized process technologies that consume significant resources. You can also define a detection rule to adapt the names of such process groups based on your needs.

Using the Settings API, you can easily

To use the Settings API

Add your configuration to Extensions 2.0

You can also attach your current configuration to your Extensions 2.0 extension so that your custom extension comes with predefined process grouping rules. Add your definition to the Extension YAML file as in this example: