If cloud-native technologies and containers are on your radar, you’ve likely encountered Docker and Kubernetes and might be wondering how they relate to each other. Is it Kubernetes vs Docker or Kubernetes and Docker—or both?

What is the difference between Kubernetes and Docker?

Docker is a suite of software development tools for creating, sharing and running individual containers; Kubernetes is a system for operating containerized applications at scale.

Think of containers as standardized packaging for microservices with all the needed application code and dependencies inside. Creating these containers is the domain of Docker. A container can run anywhere, on a laptop, in the cloud, on local servers, and even on edge devices.

A modern application consists of many containers. Operating them in production is the job of Kubernetes. Since containers are easy to replicate, applications can auto-scale: expand or contract processing capacities to match user demands.

Just as people use Xerox as shorthand for paper copies and say “Google” instead of internet search, Docker has become synonymous with containers. Docker is more than containers, though.

Docker is a suite of tools for developers to build, share, run and orchestrate containerized apps.

What is Kubernetes used for?

Organizations use Kubernetes to automate the deployment and management of containerized applications. Rather than individually managing each container in a cluster, a DevOps team can instead tell Kubernetes how to allocate the necessary resources in advance.

For a deeper look into how to gain end-to-end observability into Kubernetes environments, tune into the on-demand webinar Harness the Power of Kubernetes Observability.

What are the challenges of container orchestration?

Although Docker Swarm and Kubernetes both approach container orchestration a little differently, they face the same challenges. A modern application can consist of dozens to hundreds of containerized microservices that need to work together smoothly. They run on multiple host machines, called nodes. Connected nodes are known as a cluster.

Hold this thought for a minute and visualize all these containers and nodes in your mind. It becomes immediately clear there must be a number of mechanisms in place to coordinate such a distributed system. These mechanisms are often compared to a conductor directing an orchestra to perform elaborate symphonies and juicy operas for our enjoyment. Trust me, orchestrating containers is more like herding cats than working with disciplined musicians (some claim it’s like herding Schrödinger’s cats). Here are some of the tasks orchestration platforms are challenged to perform.

With these challenges in mind, let’s take a closer look at the differences between Kubernetes and Docker Swarm.

Both Docker Swarm and Kubernetes are production-grade container orchestration platforms, although they have different strengths.

Docker Swarm, also referred to as Docker in swarm mode, is the easiest orchestrator to deploy and manage. It can be a good choice for an organization just getting started with using containers in production. Swarm solidly covers 80% of all use cases with 20% of Kubernetes’ complexity.

Swarm seamlessly integrates with the rest of the Docker tool suite, such as Docker Compose and Docker CLI, providing a familiar user experience with a flat learning curve. As you would expect from a Docker tool, Swarm runs anywhere Docker does and it’s considered secure by default and easier to troubleshoot than Kubernetes.

Kubernetes, or K8s for short, is the orchestration platform of choice for 88% of organizations. Initially developed by Google, it’s now available in many distributions and widely supported by all public cloud vendors. Amazon Elastic Kubernetes Service, Microsoft Azure Kubernetes Service, and Google Kubernetes Platform each offer their own managed Kubernetes service. Other popular distributions include Red Hat OpenShift, Rancher/SUSE, VMWare Tanzu, IBM Cloud Kubernetes Services. Such broad support avoids vendor lock-in and allows DevOps teams to focus on their own product rather than struggling with infrastructure idiosyncrasies.

The true power of Kubernetes comes with its almost limitless scalability, configurability, and rich technology ecosystem including many open-source frameworks for monitoring, management, and security. 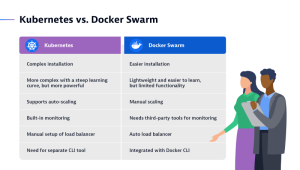 Docker and Kubernetes: Better together

Simply put, the Docker suite and Kubernetes are technologies with different scopes. You can use Docker without Kubernetes and vice versa, however they work well together.

From the perspective of a software development cycle, Docker’s home turf is development. This includes configuring, building, and distributing containers using CI/CD pipelines and DockerHub as an image registry. On the other hand, Kubernetes shines in operations, allowing you to use your existing Docker containers while tackling the complexities of deployment, networking, scaling, and monitoring.

Although Docker Swarm is an alternative in this domain, Kubernetes is the best choice when it comes to orchestrating large distributed applications with hundreds of connected microservices including databases, secrets and external dependencies.

How does advanced observability benefit Kubernetes and Docker Swarm?

Whether you’re using Kubernetes or Docker Swarm, or both, managing clusters at scale comes with unique challenges, particularly when it comes to observability. Application teams and Kubernetes/Swarm platform operators alike depend on detailed monitoring data. Here are some examples. 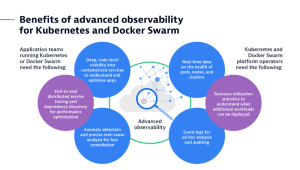 Kubernetes provides some very basic monitoring capabilities, like event logs and CPU loads for example. However, there’s a growing number of open-standard and open-source technologies available to augment Kubernetes’ built-in features. Some frequently used observability tools include: Promtail, Fluentbit and Fluentd for logs; Prometheus for metrics; and OpenTelemetry for traces, to name a few.

Dynatrace integrates with all these tools and more, and adds its own high-fidelity data to create a single real-time entity model. This unique capability enables Dynatrace to provide advanced analytics, AI-powered root-cause-analysis and intelligent automation, providing application teams and platform operators a unified view on the full technology stack.

To learn more about how Dynatrace automatically ingests and leverages data from open-source tools like Prometheus, Fluentbit, and OpenTelemetry, join us for the on-demand Performance Clinic Kubernetes observability for SREs with Dynatrace.