Welcome back to the blog series where we provide you with deeper dives into the latest observability awesomeness from Dynatrace, demonstrating how we bring scale, zero configuration, automatic AI driven alerting, and root cause analysis to all your custom metrics, including open-source observability frameworks like StatsD, Telegraf, and Prometheus.

Here, in Part 4 of this series, we show you how to leverage the power of Dynatrace Davis for your Prometheus metrics in Kubernetes.

Prometheus has become the dominant metric provider and sink in the Kubernetes space. Many technologies already expose their metrics in the Prometheus data format. Others provide exporters to transform the metrics of their monitoring interface into a Prometheus compliant format. However, the vast number of technologies and metrics makes it difficult to get the most value out of them. The two main pain points that users struggle with are:

Dynatrace now provides support for Prometheus metrics of Kubernetes pods, bringing these metrics into the larger context of the microservices and pods, and allowing for enhanced alerting with auto-adaptive baselining of these metrics.

Unlocking the power of Prometheus metrics

Dynatrace makes it easy for you to pull Prometheus metrics from Kubernetes pods into your environment and making them available for further analytics. Dynatrace leverages K8s pod annotations for integrating metrics into Dynatrace and enriching them with K8s topology information. You only need to define a couple of annotations in the pods template of your workloads to have Dynatrace pick up the metrics.

The Dynatrace annotations in the following sample pod template control if and at which port the metrics are to be captured:

Visualize the most important metrics on your dashboards

The metrics from Prometheus endpoints are available in the Metrics overview (to access, select Metrics from the navigation menu) and can be used in the new Data explorer for charting and creating your own dashboards.

In the following example we chart the redis_commands_duration_seconds_total metric for all Redis pods and split the metric by the dimension cmd. 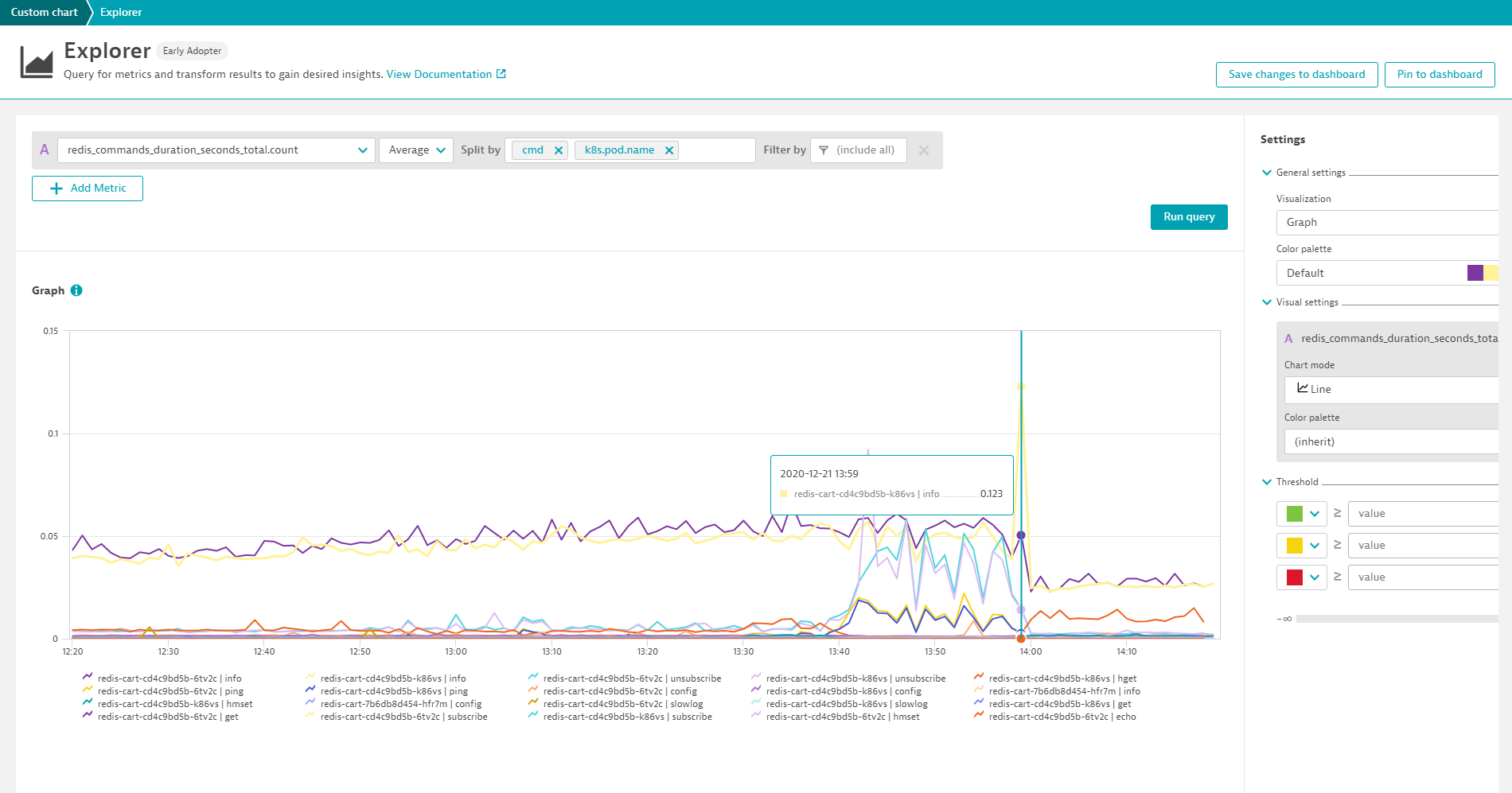 Charts can easily be pinned to dashboards and thus provide an instant overview of all important metrics. When metrics are displayed on dashboards, management zone filtering is applied automatically so that team members only have visibility into those metrics that they are authorized to view. 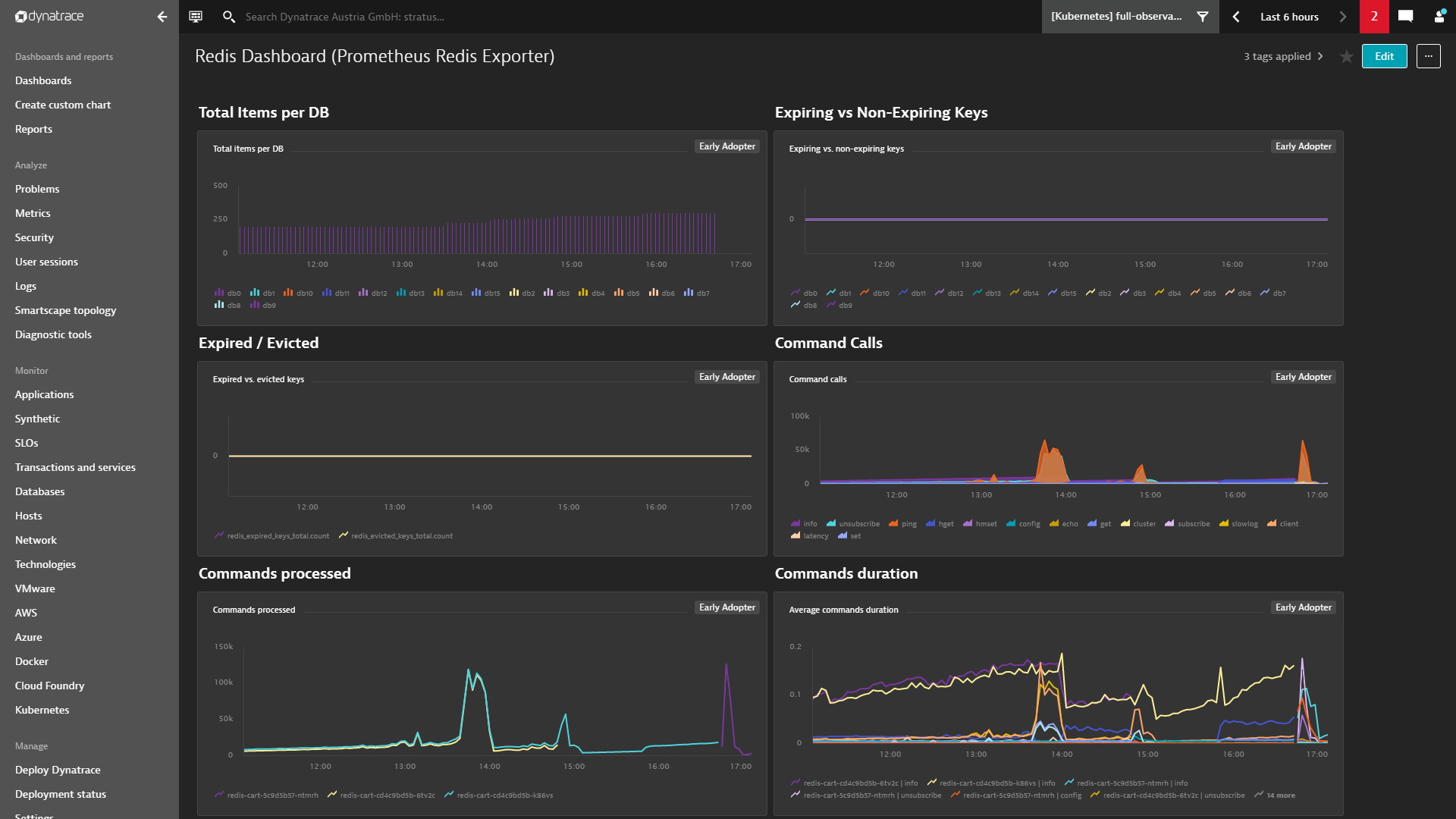 When it comes to alerting, the typical approach is to define static thresholds that can’t be exceeded during a defined timeframe. This approach works well for availability-related metrics.

There are also however performance related metrics for which it makes sense to follow a baseline, and alert on anomalies when the reference value changes over time. The key advantage of such an auto-adaptive baselining approach is that you don’t need to manually adapt the thresholds of your alerting configurations when system behavior changes slightly.

Get started with just a few steps

What’s next for Prometheus metrics support

We’ve already received valuable feedback from early customers and are enhancing our support for Prometheus. Topics that are high on our list are: