By extending AWS container orchestration to customer-managed infrastructure, customers gain operational control without compromising on the value of the AWS fully managed, easy to use, control plane that’s running in the cloud, and always up to date.

As a result, ECS Anywhere delivers the same operational models for on-prem and the cloud. It keeps application processing closer to the data to maintain higher bandwidth and lower latencies, adheres to compliance regulations that don’t yet approve cloud managed services, and allows data center capital investments to be fully amortized before moving to the cloud.

Dynatrace OneAgent is responsible for collecting all relevant monitoring data within your environment, and is required to do so even if your hosts are deployed within Docker containers, microservices architectures, or cloud-based infrastructure.

To implement this option, you specify the OneAgent code module for a specific Dynatrace environment within your Dockerfile, as shown in the images below, and then build and push the image to your registry store such as Amazon Elastic Container Registry (ECR).

Each time you want to leverage a new version of Dynatrace OneAgent, you must rebuild your local OneAgent code modules and application image. Any newly started pods from this application image will be monitored with the latest version of OneAgent. More details can be found in the Dynatrace documentation.

How does it work?

The ECS cluster is responsible for orchestrating customer defined ECS tasks, such as starting or stopping a container on an on-prem host. Host registration to the ECS cluster is managed by System Manger and governed by AWS Identity and Access Manager (IAM). The diagram below shows these components and the communication flows. 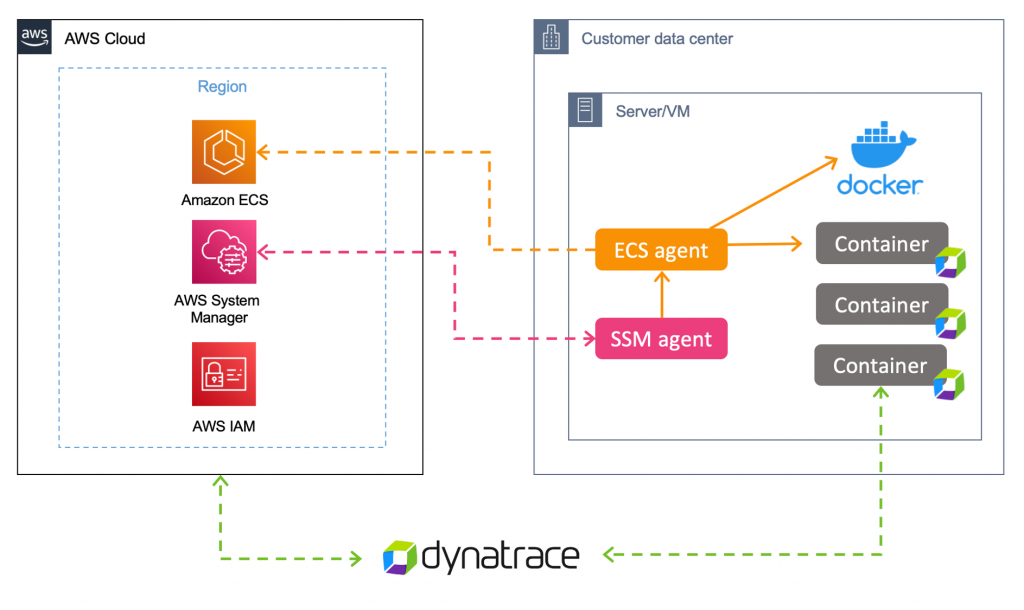 Getting started with Dynatrace and AWS ECS Anywhere has never been easier.