Autonomous Cloud is the culmination of our best practices and learning to help automate your enterprise, innovate faster, and deliver better business ROI.

I’m going to revisit the Dynatrace digital transformation in this blog, because it is also an excellent story that began our journey to Autonomous Cloud (AC).  AC is the culmination of our best practices and learning that we share every day with our customers to help them automate their enterprise, innovate faster, and deliver better business ROI.

In 2011 Dynatrace saw the digital shift early on and transitioned from delivering software through a traditional on-premise model to the successful hybrid-SaaS innovator we are today. The results have been exciting and here is a snippet of some of our before / after statistics: 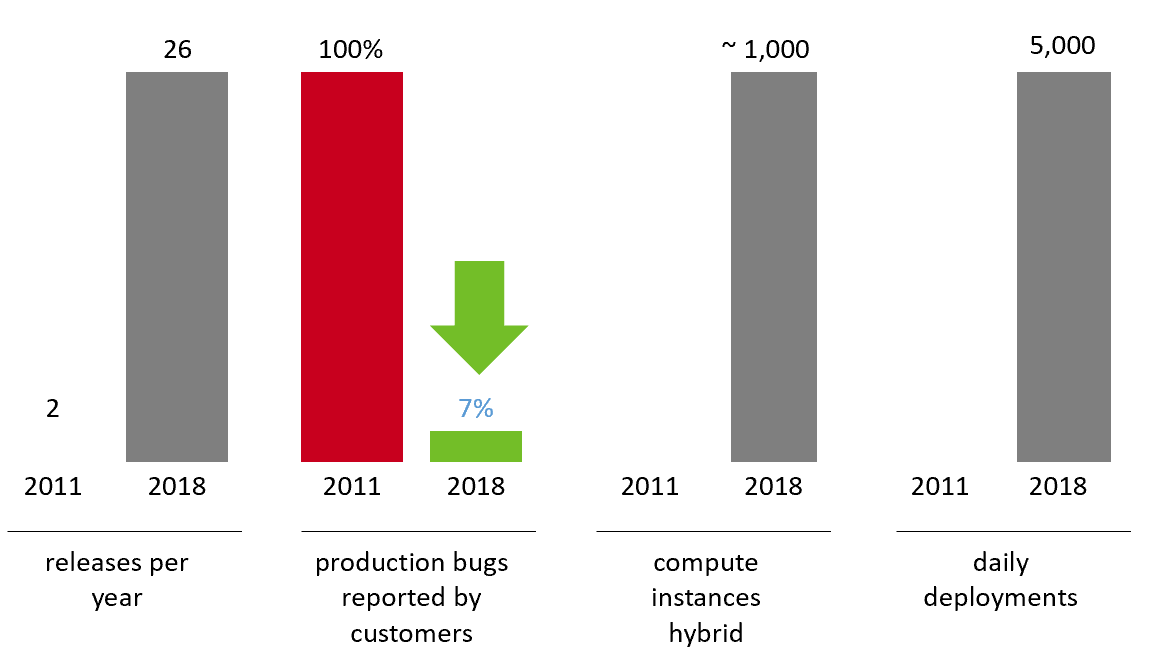 Market disruptions spark innovation and radical change.  And this is what happened to vendors in Dynatrace’s market — application performance management (APM).  Although the company was disrupting and pioneering 2nd generation APM tools in the early 2000’s, by 2011 it became apparent that cloud, microservices and containers were creating a better, faster way of developing and deploying software.

So, we jumped on that need to transform our own development and product monitoring strategy in order to embrace these new environments and maintain and expand the company’s market leadership. At the start, Dynatrace was delivering new releases twice a year and customers installed them on-premise. This was in line with the rest of the industry, but created significant problems like:

To adapt, Dynatrace took 40 of its best engineers off its existing market-leading product and empowered them to transform how the next generation of monitoring software would be designed, developed and built:

And because the product would be both the business, as well as servicing the business, speed and constant innovation was a key goal, and the entire initiative was supported by management from the top down.

“Cloud native” is not just architecture; it also means bringing cloud-centric best practices to software and IT generally.  With that in mind, here are a few of the key best practices the team aspired to: 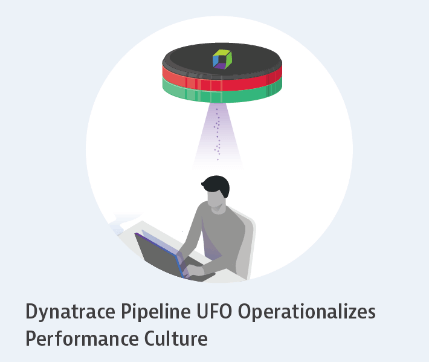 Again, some of our success statistics: 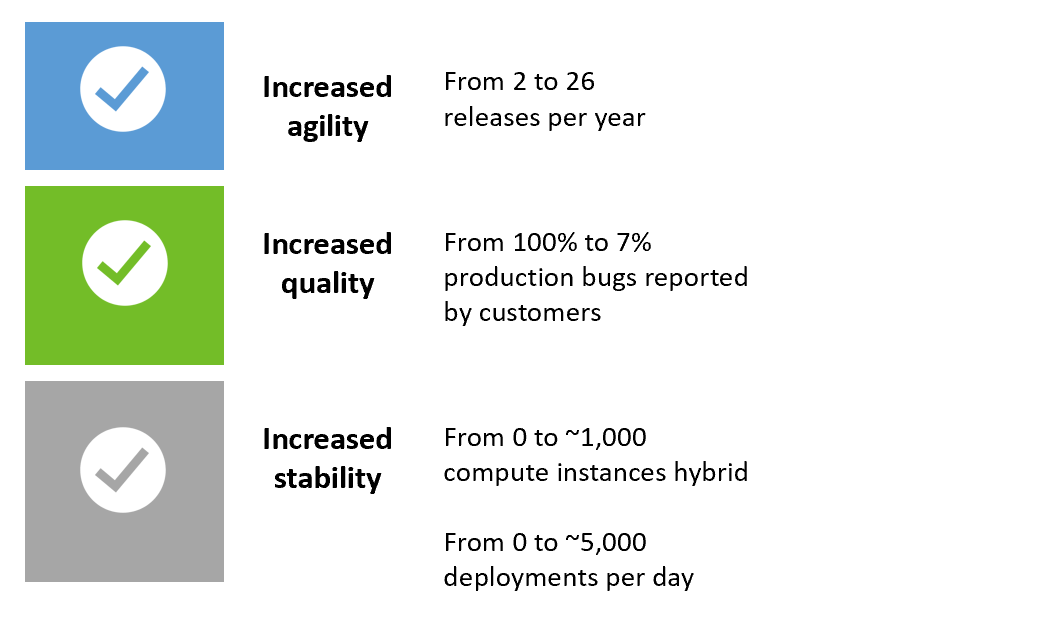 These actions, alongside others, allowed Dynatrace to achieve the goal of transforming into a DevOps, cloud-native / cloud-centric best practices-led software company.  We continually improve our product and today offer what we call the Dynatrace Software Intelligence Platform, the industry’s only AI-based all-in-one platform for cloud performance monitoring.  And, in terms of continuous innovation, we enjoy being named furthest for Completeness of Vision and highest for Ability to Execute in the Gartner Magic Quadrant for Application Performance Monitoring.

Our journey most recently took us to a pivotal moment in our company where we saw the work, the lessons learned, the development of best practices all pay off!  We completed our initial public offering and listed our shares on the New York Stock Exchange on August 1, 2019.

You can take the leap, too

In 2018 Dynatrace did a survey including two important dimensions, MTTR (length of time to remediate and resolve an issue) and mean-time-to-innovation (the time it takes for fully built and tested functionality to push out to end-users in production).  Our DevOps Advocate at Dynatrace, Andi Grabner, says these in particular can tell a lot about the maturity of a company and their level of automation.  The results surprisingly showed us that only about 5% of the people we surveyed are achieving top performance.  95% of companies today are not leveraging the full potential of cloud-native technology. 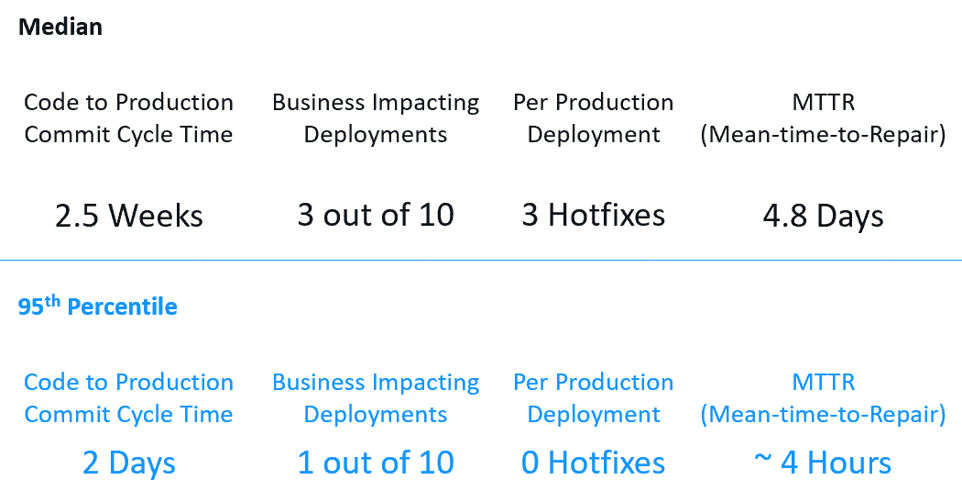 We can help.  Dynatrace has taken our best practices and learnings and is sharing these in what we are calling Autonomous Cloud.  We’ll help you automate your dev, ops and business teams so that you can continuously improve digital experiences, break down silos, and take the steps towards autonomous cloud operations.  Remember: the results can be amazing, Dynatrace improved speed to market from 2 to 26 releases per year – read more here “Game changing — From zero to Autonomous Cloud today“.

So, don’t just use our product, use it strategically and follow our path, too.  You’ll be able to fully realize cloud-native technology and gain a nice ROI on your own digital transformation, too.

What is full-stack observability?

May 19, 2022
Rob Jahn
X
Learn without boundaries at Dynatrace Perform 2023
Push your cloud past its limits with 40+ breakouts, 30+ customer speakers, and 20+ training sessions.
Register here >