At the end of March 2022, three critical vulnerabilities in the Java Spring Framework were published, including a remote code execution (RCE) vulnerability called Spring4Shell or SpringShell.

Since then, the U.S. Cybersecurity and Infrastructure Security Agency (CISA) has reported “evidence of active exploitation”, recording more than 37,000 exploit attempts in the first few days alone. With a critical CVSS score of 9.8, outlets report active scanning attempts from around the globe.

Spring4Shell is a critical vulnerability in the Spring Framework, an open source platform for Java-based application development. Because 60% of developers use Spring for their main Java applications, many applications are potentially affected.

Spring4Shell is one of three vulnerabilities published on March 30:

Like Log4Shell, a vulnerability discovered in December 2021, the Spring4Shell vulnerability challenges organizations to identify and remediate application vulnerabilities in production—before malicious attackers can compromise sensitive data, such as customer or employee data.

What is the impact of Spring4Shell?

With a CVSS score of 9.8, Spring4Shell is severe because if attackers exploit it, applications can be vulnerable to remote code execution (RCE). In fact, there are already proof-of-concept exploits available publicly. Accordingly, Spring has published a fix in Spring Framework 5.3.18 and 5.2.20.

Because Spring4Shell exposes an application to remote code execution, an attacker can possibly access all website internal data, including any connected database. It may also allow an attacker to access additional internal resources to gain more permissions or to make their way to other parts of an internal network.

How to identify whether your organization is vulnerable to Spring4Shell

As published in the Spring Framework RCE early announcement, malicious attackers can exploit the Spring vulnerability if an application operates under the following circumstances:

There are several methods and tooling available to identify if an application is affected. We explore the following options:

In addition, if you have security notifications set up, Dynatrace automatically sends a notification with the relevant details for each vulnerability upon discovery.

Further, you can also find the vulnerabilities using Dynatrace in two other ways:

Although you should upgrade all affected applications, your priority focus should be applications running on Tomcat and Java 9 or newer. In the following screenshot, you can see how Dynatrace captures all this information and provides the details for each affected process so you can prioritize mitigation actions.

Because Dynatrace performs continuous full-stack monitoring, it has full awareness of the underlying runtime, including the Java version the vulnerable code runs. If you have many affected applications, you can extract a list of the affected processes that are on Java 9 or newer using Dynatrace APIs. You can find a sample Python script that uses Dynatrace Spring4Shell APIs on GitHub.

Dependency Check is an open source tool you can use to find vulnerabilities in other third-party open source libraries.

To scan a folder for vulnerable libraries, run the CLI and point the tool to a folder, for example:
dependency-check --scan webapps.

Once executed, the tool generates an HTML report that lists the vulnerabilities. The following example shows that the Spring4Shell vulnerability (CVE-2022-22695) is listed:

Another option is to use the Apache Maven Dependency plugin to identify whether your projects use affected libraries. To find out if your application exposes the vulnerability, navigate to the directory of your Maven project and run the following three commands:

Here we can see that the application uses spring-beans version 5.3.13 and therefore has the vulnerability.

In this case, the application uses spring-cloud-function-context version 3.2.2, which means it exposes the vulnerability.

Denial of Service in Spring Expressions

In this example, the application uses spring-expression version 5.3.16, which means it is vulnerable.

How to mitigate risk of Spring4Shell

To mitigate risk, upgrade to the latest versions to address the Spring4Shell vulnerabilities.

See the Spring blog post Spring Framework RCE, Early Announcement for further details. We also suggest you take a look at the anatomy of the Spring4Shell vulnerability and how to prevent its effects—and those of similar vulnerabilities.

How to get Dynatrace Application Security

If you are a Dynatrace customer and want to start using the Application Security module for automatic runtime vulnerability analysis, go to the Dynatrace web UI and select Vulnerabilities in the menu (separately licensed).

However, if you’re not using Dynatrace yet, it’s easy to get started in under five minutes with the Dynatrace free trial. Contact us for how you can enable Dynatrace Application Security. In the meantime, have a look at our product tour.

If you are concerned about Spring4Shell’s effect on Dynatrace components, please have a look at our security alerts, specifically SpringShell CVE-2022-22965.

This article was co-authored with Robin Wyss. 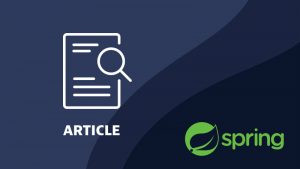 April 14, 2022
Stefan Achleitner
X
See why we're positioned furthest for Completeness of Vision
A Leader in the 2022 Gartner® Magic Quadrant™ for APM and Observability
Read the reports >