In the past year I have helped scores of developers, testers, architects and ops analyze the quality, performance and scalability problems of the business critical apps for which they are responsible. They shared their data via Share Your PurePath which allowed me to provide them quick feedback on the technical root cause of why an application won’t scale or is slow.

All of these fine people had one thing in common: They looked into the issue when it was almost or already too late. The app was deployed; users started complaining or servers crashed repeatedly.

What I realized is that the technical root cause of these problems can be found in a handful of well-known architectural and implementation patterns: inefficient database access, bad code synchronization implementations, excessive object allocations, wrongly configured frameworks, bloated websites, and ineffective use-case design. In my Share Your PurePath reviews, conference sessions (JavaOne, StarWest, STPCon), and meetup events (Java, .NET, Web Perf, DevOps, Continuous Delivery), I focus on these same problem patterns. They are easy to spot, which is why they should be addressed quickly.

The excuse I hear most often is that there was just no time or prioritization for these quality-related items during development. “We will do it later!”, “It’s too much effort right!” or “Isn’t as sexy as building new features” are all common attitudes that will backfire.

Shift Quality Left: I can — and will — help you do it!

Changing your organization and convincing everybody involved in the software delivery process to increase emphasis on quality is something must come from within the organization. And this typically won’t be embraced until after the pains of dealing with quality issues in production – wasting too much time in “war rooms” and “firefights” — has been experienced throughout the organization.

Fortunately, I can remove many of the excuses we too often hear: “We don’t have the tools and those we have are too hard to use!” Thanks to the Dynatrace Executive Management Team who — after listening to convincing arguments from my colleague Reinhard Brandstaedter and myself — agreed to make Dynatrace App Mon & UEM  available free to everyone on the “Left Side” of the continuous delivery pipeline. Here’s the official announcement that was made at the Dynatrace PERFORM 2015 User Conference.

What does “free” really mean to Dev, Test & Business?

After you sign up for the Dynatrace App Mon & UEM Free Trial you receive a 30-day trial license enabling you to analyze apps distributed on as many as five different machines, demonstrating the power of Dynatrace PurePath, PureStack & PureLytics. After 30 days the license automatically converts into a Personal License which means that you keep using the full product, with all its features, on applications that run on the same machine/host where you installed the Dynatrace Server.

What I would like to see is developers, testers, architects and even business analysts install Dynatrace on their workstations or test machines to level-up in the following use cases:

Use the Free Trial, Personal License and task list below, to improve your daily work!

Inject the OneAgent when executing your Unit or Integration Test before checking in your code. Check the PurePath to validate that your code change is not doing anything incorrect like throwing hundreds of exceptions within a new framework that was just added to the list.

I recorded several Diagnostics YouTube Tutorials to help you to determine which Dashlets to look at and how to use them. Find all of them here: https://bit.ly/dttutorials.

Before executing a multi-user, hour-long JMeter, Load Runner, SilkPerformer, Dynatrace Load, BlazeMeter, SOASTA tests, simply run the scripts for a single virtual user, and do a quick sanity check on the key metrics that will indicate if the load test is going to fail anyway: # of SQL Calls, # of Same SQLs, # of Logs Created, # of Internal Service Calls, Calls to external Services, etc.

Automate & Integrate in your Build Pipeline

Instead of doing all this manually, hook up Dynatrace with the tests you execute as part of your build pipeline. We have great plugins for your Ant & Maven Scripts that automatically inject the OneAgent and collect data for automated test executions. We have plugins for Jenkins, Bamboo, XebiaLabs and other build-automation software to trigger data capturing, but also pull Dynatrace results into your Build Server Dashboards to avoid going to Dynatrace repeatedly.

To get you started there is a tutorial on automating JMeter scripts with Dynatrace and then integrate it with Jenkins.

You are being offered Dynatrace Personal License. If you take it, I ask only two things from you in return:

Your first step should be to Get Your Dynatrace Free Trial which will automatically convert into a Personal License after 30-days. Check your email and spam folder for emails from me — Andi Grabner — as it has been reported that  some emails sent out during the free-trial period are detected as spam. 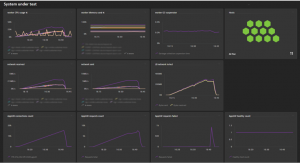