Earlier this month at Dynatrace Perform 2018, we shared our vision of how you could interact with Dynatrace in the future. As we move towards NoOps, the traditional ways to interact with monitoring software in NOCs and war rooms will go away.

The NOC is Dead

As a matter of fact, last year when we moved into our new Boston office, we shut down our NOC that we used for monitoring. The space previously reserved for the NOC is now being used as a social lounge with table tennis, air hockey and pool tables. 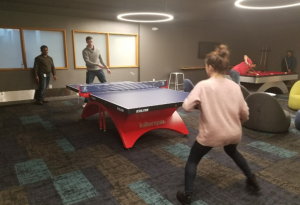 Most of our monitoring is now fully automated using Dynatrace and auto-remediation. We have Amazon Echos and Dynatrace UFOs everywhere so that people can ask questions on the fly to quickly learn how their apps are performing.

What about a digital war room?

In some cases, however, human interaction will be required. For example, when auto-remediation does not work, this will require the team to conduct a deeper investigation to determine what the problem may be

At first, we thought that building a big “war room” with lots of screens on every wall would be a fun techie thing to do, but now we believe such things are not modern, but rather relics of the past. Creating a virtual war room would just be like creating a new relic right along with it.

Here are the conceptual problems we had with a digital war room:

Augmented Reality is the Future of Collaboration

We looked at numerous approaches that could support our virtual collaboration needs and determined augmented reality was the way to go, we set out to find the best way to implement it. Pretty quickly we decided Microsoft HoloLens would be our AR device of choice.

Getting back to the potential issues we had with war room…HoloLens solves all of them:

All of that said, we went ahead and ordered some and started development.

So how does it feel to work in Augmented Reality with Dynatrace. As the HoloLens provides a voice interface the first step was to build a Microsoft Cortana integration for Davis® to have a conversational interface.

So, we had voice, but no visualisation (yet). Our first idea was to bring the Visual Resolution path of Dynatrace into a 3D model. As stated above, the most likely use case for AR is when a problem cannot be automatically resolved. Visualizing this problem without the boundaries of a two-dimensional screen sounded very appealing, so we built a visual resolution path that you can interact with in augmented reality. 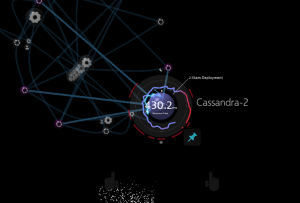 As we built this, we realized that having some “old school” dashboard tiles to pin was also proving helpful, so we built a set of tiles that you can pin everywhere and anywhere. First, we thought this might not be the most amazing thing in the world, but trust me, once you pin charts out of a Dynatrace Smartscape to any place in a room where people are working, you’ll never want to go back to a monitor. 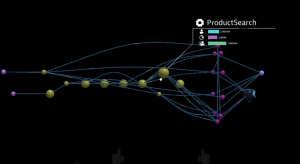 As Dynatrace’s AI automatically knows about all this information, imagine these virtual information walls being built automatically for you. Long story short, this supposedly boring feature turned into something I’ll never want to miss again.

As you know, Dynatrace is committed to ensuring the best performance for the user, so having a 3D visualization for user experience was an obvious thing to build. Unlike some people, we believe the world is not flat, so we built a 3D model of the globe visualizing user experience in real time – this allows the real-time user interaction. We will develop more 3D interaction models going forward.

Last but not least we needed to solve yet another problem: how to visualize personally relevant data in a virtual environment. As all kids of our generation, we played video games when we were young, so the idea of a cockpit came pretty naturally to us. The cockpit or PIP (personal information panel) feels totally natural to you. You carry all your tools and notes around with you without having to actually carry anything. 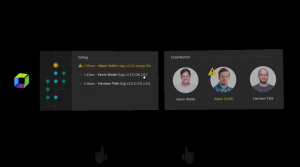 All in all, we built all major components to enable a full problem resolution cycle entirely in Augmented Reality, that you can work on in a group wherever you want.

By now, I am sure you want to see Davis for HoloLens in action. Below you find a short walk through of the major capabilities of the first version. As you can see this demo was recorded in one of our Linz developer offices. (Which proves every office can become a virtual collaboration space in minutes.)

You may think this all sounds very futuristic. The reality, however, is that everything we do in this demo is based on actual data and API integration with the Dynatrace AI. Technically you can connect Davis for Augmented Reality with any Dynatrace tenant and see your environment in action.

Is Davis for HoloLens ready for prime time?

We believe that augmented reality will be the future of interaction with monitoring tools. At the same time, we know that there is still some way to go until it will be ready for the mass market of our customers. Obviously, if we build something it has to scale for our entire customer base. That is why we currently make it available to a limited amount of Dynatrace users which are part of our innovator’s program.

As we have proven with the Davis conversational interface, we can turn our – as some may call them – “crazy ideas” into marketable products in a year or two. So stay tuned …