How your organization can move from DevOps to NoOps and ACM, taking advantage of Dynatrace's experience on our own transformational journey.

It feels like just yesterday DevOps was all the rage, and everything had to be “Cloud” in order to be modern. These days, most organizations have embraced the benefits of DevOps and are running one or more of their applications on somebody else’s computer.

But what made organizations adopt these techniques and technologies? It was the promise that they could deliver software faster, more frequently, and with higher degrees of quality, enabling the business to respond better to constantly changing customer demand.

The faster you could take an idea from conception to your end users, the larger your competitive advantage. Alternatively, your competitive edge would surely dwindle if you had to wait six months for the next release window to get that much wanted feature into production.

At Dynatrace, we went through such a transformation ourselves, back in 2011 when we saw the need to create a new platform that was purpose-built for these dynamic, cloud-native IT environments. But when we first embarked on this journey, we looked like a very traditional software company:

We realized the importance of transforming the way we built and deployed our new solution, and today, we now release new features to our customers 26 times per year.

And while our environments have exploded in terms of complexity, we’ve reduced the number of production issues reported by our customers to around 7%, and we deploy about five thousand times per day in production-like environments to continuously test our platform.

How did we achieve that? With our Dynatrace secret sauce, where automation was the key ingredient.

Our platform now had AI and automation built in its core, enabling us to deliver better software, faster and provide a platform that could scale and resonate with these new cloud-native IT environments.

Over time, our story resonated with our customers, partners. Even analysts like Forrester who wrote a non-commissioned case study on our successful transformation.

And the more we started talking about our story, the more we saw IT leaders across our market, and other industries alike, recognize the importance AI and automation hold as they demonstrated a strong desire and to move towards NoOps and Autonomous Cloud Management (ACM) too.

The Road to ACM

Recognizing this market change, we felt that given the right mindset, approach and dedication any enterprise could embark on their own ACM journey just like we did.

And so, to further our impact on our own customers we conducted a study, in an effort to determine where our customers were in terms of maturity on their road to NoOps and ACM, and found that whilst most of our customers were doing DevOps and running applications in the cloud, they were not realizing the results they hoped to see:

So, we began designing a repeatable solution to this challenge, represented in our ACM methodology below.

As with building any pyramid, you need to work your way from the bottom up:

By applying these four concepts throughout your organization, you can deliver on the premise that we started off with: delivering software faster, more frequently and more reliably in a world that demands innovation at the speed of light without diminishing quality.

Now you’re excited about the benefits ACM can bring to your organization, and you’ve learned a thing or two about our own transformation at Dynatrace, you may wonder where to go next?

First of all, I suggest that you fill in the Dynatrace Autonomous Cloud Survey and see how you stack up against your peers. Also, check out my colleague Katalin’s blog post on what these results mean for your organization.

You may be eager to take the plunge, but would like to learn more about how this would work in a practical environment? You can dip your toes in during a five-day, immersive hands-on ACM Lab, at one of our Dynatrace offices located around the world, where you’ll be introduced to all the technologies and techniques involved with ACM; from breaking down a monolith into micro-services to canary deployments in an unbreakable delivery pipeline; it’s all there!

Stay tuned for a follow-up blog with more details on our Autonomous Cloud Labs, and get in touch with a Dynatrace representative today if you’re interested in embarking on this ACM journey with us. 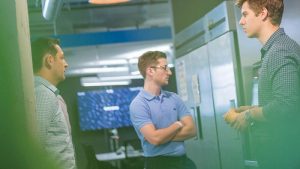