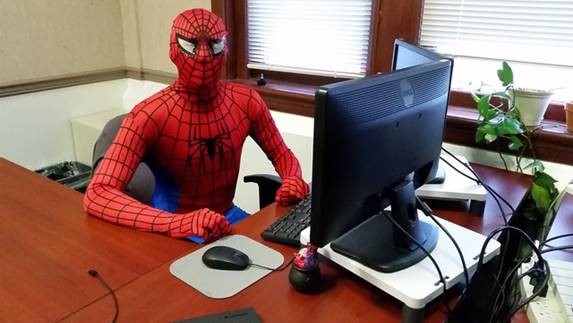 An orphan, raised by his Aunt May and Uncle Ben…we all know the story of Peter Parker. A bright young scientist bitten by a radioactive (and genetically modified…depending on if you’re a book or a movie kind of person) spider. Spider-Man, or simply “Spidey” to his friends, was born. Superhuman strength, ability to climb walls, web shooting, and of course, his “spidey-sense” made him a superhero favorite.  Perhaps it was his scientific geekiness, or just the fact that he was a comic book character that makes him popular among us IT folk. Either way, there’s a lot we can learn from Spidey.

First off, the obvious, he’s a web guy…no stranger to .Net environments I’m sure.  The webbed crusader some may say. (Webbed, not caped, we all know how some people feel about capes.)

Back to web…and being mobile…as long as we’re doing the analogy thing. In this age of digital transformation, we see the same theme.  Everything is web, everything is mobile, and everything is transforming…and like our superhero friends, also spending time in the clouds.

But Spider-Man is more than just his web ability. Just shooting webs from his wrists isn’t what made him a superhero.  It was the combination of all his new-found powers. Overall strength, speed and agility were a huge part of it. And of course, his “Spidey-Sense”, allowing him to know everything going on around him and alerting him to danger.

So, at Dynatrace, in an effort to be the superhero of monitoring in the age of Digital Transformation, we’ve taken some lessons from our buddy Spidey.

We do Web too.  In fact, we do it really well. Full-stack, Cloud, Docker, Containers, Microservices, Mobile, php, java…the list goes on and on.  But, just like with Spidey, that’s only part of it. We do the non-web stuff too. SAP GUI, Oracle EBS, Citrix, Peoplesoft, remote site monitoring, all TCP/IP activity, etc. We’re really strong there too. Our agent installs are incredibly fast and agile, and like Spidey’s sense, we instantly know everything that’s going on in the environment and can alert to any danger.

The Challenge of Monitoring SAP

SAP is a prime example of a difficult application to monitor. While it does have the option of a web-based front end, most on-site deployments primarily use the SAP GUI front end.  In this case, a browser isn’t used by the end-user, so browser and web-based tools aren’t compatible. SAP GUI uses unique T-Codes as the basis for the tasks, modules and process that SAP runs. Visibility into these T-Codes can show the exact SAP functions that are being run by the end-users. For operations teams that are trying to identify and resolve end-user issues, visibility into when what, and how these transactions perform is critical.

In addition to the front-end T-Codes, SAP also uses proprietary protocols for SAP to SAP communication as well.  The RFC (remote function calls) are another communication method that is unique to SAP for communication between components. Much like the T-Codes, these operations are often customized and understanding their usage and performance is critical to maintaining a properly running SAP environment. The database tier is unique as well. Many SAP systems are now utilizing the SAP HANA database.

To make things even more complicated, SAP isn’t an isolated application.  Many other applications need to interact with SAP to support the business. Existing applications will need to request information from  SAP and vice versa. The communication between SAP and other systems can utilize a variety of protocols…both web and non-web.

To get a full picture of the usage, performance, and availability of SAP and the applications it interacts with requires a monitoring solution that can understand these protocols and communication methods. In addition to that, it needs to be able to dive into the individual servers to understand the underlying processes that are running.

Check out the below video that shows a quick 5-minute demonstration of how Dynatrace can take data from agents and the wire to give a full picture of the performance of a complicated application like SAP. Auto discovery of applications and services. Problem identification and deep understanding of proprietary SAP protocols, it’s all in there. You’ll know about and solve the problem before the users even know it happened. We’ll make you an IT Superhero. Instead of spending hours digging through reports and charts, you’ll have more time for your Mary Jane Watson.

Dynatrace’s automatic and intelligent observability co-flies with GKE Autopilot for managed Kubernetes – you can have it all!