We recently announced that Dynatrace would be adding performance monitoring capabilities for AWS Lambda functions and voice-based interactions with Amazon Alexa. This new support will give organizations code-level insights into the entire omnichannel landscape – web, mobile and voice – for more visibility than ever before.

But, it begs the question: what exactly is Lambda? Why is this a big deal? What is AWS Lambda used for?

Simply put, AWS Lambda allows users to run code without needing to provision or manage servers for running that code; in other words, it’s serverless computing. The service allows you to upload code for any kind of application or service, and will then automatically run and scale that code for you. Users can set it up so that the code is automatically triggered either by other AWS services or being called directly from the web or mobile (e.g. an event coming from an IoT device). Lambda will run the code only when triggered, and do so with only the computing resources necessary. 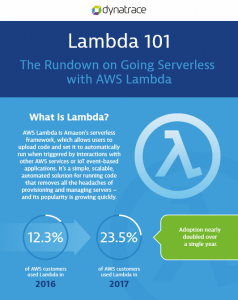 The value of Lambda

The simplicity and automated, scalable nature of AWS Lambda’s serverless approach is appealing in and of itself; but, where the real value in Lambda lies is how it charges the user. Rather than needing to pay for entire servers to run code, or pay for blocks of time to run serverless code, what Lambda instead does is only charge you for the compute time you’re using – specifically, charging every 100ms that the code is executed and the number of times the code is triggered. 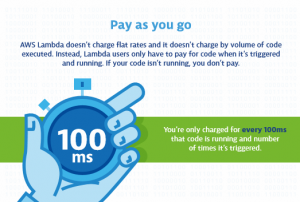 In other words, you only pay for the time when your code is running. If the code isn’t running and hasn’t been triggered, you don’t pay. Simple as that.

Where Lambda trumps other serverless approaches

Organizations are naturally drawn to AWS Lambda for its serverless model; taking server provisioning and management out of the equation lifts a heavy burden off IT’s shoulders, after all. But, there are other serverless frameworks out there. What makes Lambda stand out?

For one, its low entry barrier and simplicity of functions make it an easy gateway to the serverless world for organizations. As a company’s first step into the cloud, Lambda works out very nicely.

But, as David Mytton points out, what really matters – and where Lambda succeeds over its competitors – is the availability of other services within its cloud environment. Because Amazon hit the serverless race first, Lambda has a clear advantage over other services, with a bigger portfolio of products that can be integrated with Lambda’s compute, networking and storage functions. AWS Lambda’s execution pipeline is plainly the most robust and diverse one available on the market.

These benefits are why AWS Lambda’s serverless compute service is growing more popular for IoT and Alexa skills, both of which are becoming increasingly prominent parts of today’s omnichannel customer experience. Users don’t just make purchases from their phone or laptop, anymore; they use voice assistant devices like Amazon Alexa to carry out transactions, too. And, Amazon’s newly-announced Alexa for Business will only further expedite this shift, as more enterprises take advantage of voice capabilities to make business transactions. 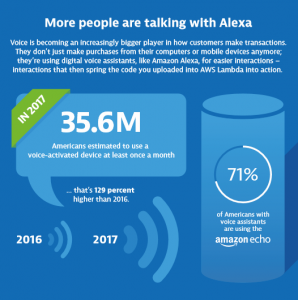 All the more reason Dynatrace’s real-time monitoring functionality and integration with AWS Lambda is so crucial: with so many new ways for customers to interact with a business, not having any insight into how transactions on voice and other IoT channels are performing, and proactively identifying and resolving failures within these channels, can create enormous blind spots for companies. With Alexa now being added to the workplace, the need to monitor Lambda functions and performance is even more imperative. 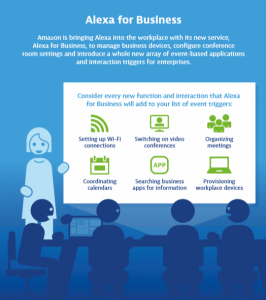 With the added Dynatrace capability, organizations running AWS Lambda can now yield deeper visibility into how their code is running and achieve a better understanding of the code’s impact on application performance and user experience. Dynatrace monitors this execution environment in real time and provides users with continuous, end-to-end visibility across the entire stack. 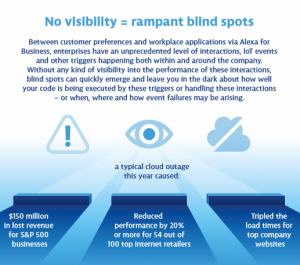 Read more about how Dynatrace provides the fastest and easiest way of monitoring and tracing AWS Lambda functions in end-to-end hyper-scale web applications.