Dynatrace Managed is the on-premises software intelligence platform that brings Dynatrace SaaS capabilities to your infrastructure while ensuring resilience and optimizing the total cost of ownership. One main advantage of using a product in SaaS mode is the automatic scaling of resources based on system load. In on-premises environments, resource scaling is not always easy and requires time and thorough planning by the administrator. Using existing storage resources optimally is key to being able to capture the right data over time.

Dynatrace continuously invests in improvements to resource optimization and the mechanisms that allow Dynatrace Managed to automatically adapt to changing resource usage. In this blog post, we announce:

Dynatrace stores transaction data (for example, PurePaths and code-level traces) on disk for 10 days by default. Data retention settings for different data types determine the length of time for which data is stored and the amount of data that’s stored over time. These retention settings can be configured by your Dynatrace Managed admin. In a typical usage scenario, recent data is accessed more frequently than older data. Dynatrace Managed now compresses transaction data that’s older than three days and automatically decompresses the data at read time. This decompression of data is achieved with minimal impact on performance and costs. Compression of data that’s older than three days utilizes one virtual CPU.

The compression of transaction data older than three days can free up to 50% more storage space in your Dynatrace Managed Cluster. The amount of storage you gain depends on many factors, including:

The following are examples of how these different factors impact overall storage gained after compression. However, because of the factors mentioned above, these examples should not be used to predict your actual storage gains:

When transaction-data compression is activated for Dynatrace Managed

Transaction-data compression is enabled for all Managed deployments beginning with Dynatrace Managed version 1.222. After the update, you need to restart your Dynatrace Managed Cluster within a maintenance window to start transaction-data compression. You can expect to see a slight increase in CPU usage (by a few percentage points) of one virtual CPU until the compression of the existing data is complete. Following the initial compression of data older than three days, data is automatically compressed on the fly as it ages.

The duration of initial compression depends on your environment and the data stored, so it’s not possible to predict the exact duration. Configured retention times and your Cluster infrastructure directly impact the duration:

The screenshot below of one of our own test environments visualizes how disk-space usage consistently decreases after the initial activation of compression: 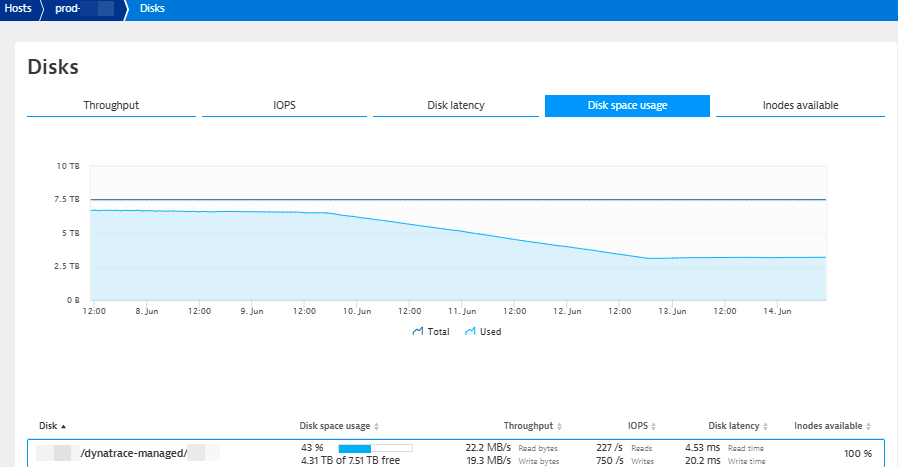 The screenshot below shows CPU usage on the same server (a 32-core machine). Only a slight increase in CPU usage is visible after the start of compression on June 7.

Transaction-data compression eventually results in more available disk space on your Managed Cluster and enables you to increase configured retention times for your environments and retain data for longer periods of time.

Dynatrace retention times for certain data types can be configured by the administrator of your Dynatrace Managed deployment. When the data-retention cutoff for a data type is reached, older data is automatically deleted. The amount of data that can be stored is determined by the available disk space and the storage quotas defined for the deployment and its environments. To ensure that recent data is always captured even when disk resources run low or quotas are exceeded in deployments, Dynatrace Adaptive Data Retention automatically adapts retention times. When ADR is triggered, retention times are increased or decreased for:

As soon as disk space or quotas are freed up again, retention times are continuously increased until they reach the configured values.

With the new improvements to ADR, Dynatrace has unified how we automatically adapt retention times for a Dynatrace Managed Cluster:

For more information on ADR and what you can do when ADR is active, see Adaptive Data Retention in Dynatrace Documentation.

What to expect with the ADR improvements

The improvements to Adaptive Data Retention were enabled with Dynatrace Managed version 1.216.

ADR is only activated for your deployment if:

When ADR is activated, you’ll see a corresponding message in the Storage settings section of your environment’s page in the Cluster Management Console. The screenshot below shows the messaging for an environment with active ADR resulting in reduced retention time for transaction-data storage.

These improvements to ADR enhance existing behavior and lead to more equitable data retention across environments in a Dynatrace Managed Cluster.

Your input matters. Please share your feedback with us by posting your questions and clarifications in the Dynatrace Open Q&A forum.