In Java 9, compiled code is no longer exclusively created using the built-in just-in-time (JIT) compilers. This blog post explores two ways that compiled code can be introduced without using a built-in JIT.

Java 9 specifies a new interface for JIT compilers that’s written in Java (JVMCI). This means that anybody can ship a JIT compiler that can be easily attached to a VM. The compiler can be the exclusive JIT compiler in a system, or it can work hand-in-hand with a built-in JIT compiler in tiered mode. In the first case, the compiler (which is just Java code, just like any application), interprets and eventually compiles itself. In the latter case however, the compiled code can be used for any compilation tier. Hotspot, like many other VMs, already defaults to a tiered compilation mode. In this mode, a method starts out by being interpreted, but after reaching a specific number of executions, it is compiled by the client compiler (which generates code quickly, but only with rather simple optimizations). Finally once enough executions have occurred, the code is compiled by the server compiler (which is comparably slow, but applies aggressive optimizations) for maximum performance. The custom JIT can be inserted at any level. This means it can be used both as a middle tier or as the final tier. 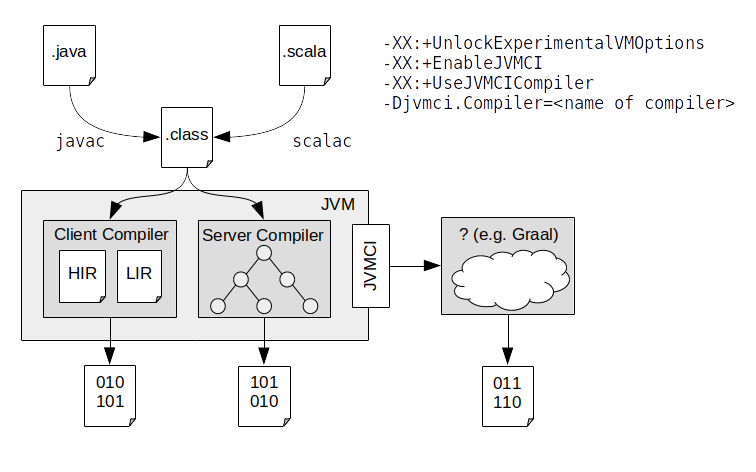 Most application vendors will probably never develop and ship a custom JIT compiler. However, this interface is a necessary step towards supporting non-native JIT compilers. New compilers can be more easily extended, experimented with, and maintained by VM vendors.

The second new way of introducing compiled code into the JVM is by precompiling individual classes or entire modules into a native library (.SO or .DLL) (JAOTC). This library can then be passed to the JVM, which will bypass the interpretation step and use the compiled code right away.

To ship an application with ahead-of-time compiled libraries, you have to keep a few things in mind:

Although the VM will start using the ahead-of-time compiled code right away (bypassing interpretation), code will still be eventually JIT compiled to achieve better performance. This feature is mainly designed to decrease startup time and boost performance in methods that are too rarely executed to be JIT compiled at all.

The following diagram shows how to precompile a simple class and how to hand it over to the JVM. 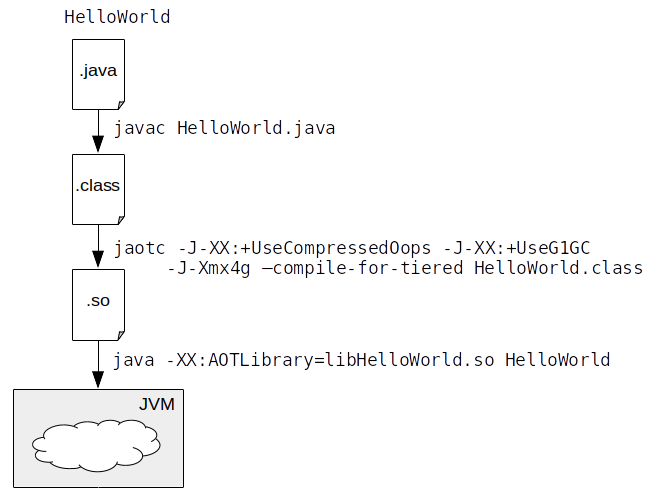 On a side note, the Oracle ahead-of-time compiler uses Graal as the backend, which in turn uses JVMCI to attach to the Hotspot VM.