In this 4 part blog series, I am exposing DevOps best practices using a metaphor inspired by the famous 6th century Chinese manuscript: “The Art of War”. It is worth reminding that Sun Tzu, just like me, considered war as a necessary evil, which must be avoided whenever possible. What are we fighting for here? Ultimately, we’re fighting for the absolute best services and features that we can deliver to our customers as quickly as we possibly can, and to eliminate the “War Room” scenario we are all so familiar with.

Welcome to my four part series on what I’m going to call the Art of DevOps.  We will embark on a mission to reveal the extremely valuable intelligence that’s been collected about a unique strategy to continuously deliver assets to the operational battleground safely, securely and quickly.  This strategy drives optimal monitoring of the frontlines and enhanced communications with the troops supporting the initial development.  I do make the assumption that most of you are battle worthy veterans in one or more of the environments that I’ll review.  Beyond this introduction blog, I’ll brief you on some of the best DevOps tactics to aid in your deployments while providing maximum situational awareness within each environment. I’ll also do my best to expand upon the best lines of defense with minimal traumatization. Unfortunately, in my experience, many of you will be in a moral deficit either over lack of preparation such as test automation, damaged assets or organizational challenges in one or more areas of deployment. The goal of this series is to help you recognize where your deficits are, how to address certain scenarios and which tactics you need to use to lead a successful DevOps operation. 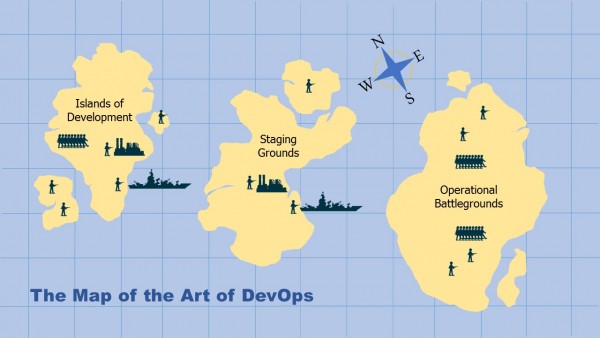 So what are we fighting for? Ultimately, we’re fighting for the absolute best services and features that we can deliver to our customers as quickly as we possibly can. We seek to be victorious over our competition, successful in informing and meeting or exceeding the expectations of our commanding officers while preventing and mitigating casualties caused by critical issues and poor performance. Obviously this battle that has been going on for a long time. In more traditional deployments, it’s very common for the troops in development, test and operations to coordinate, albeit poorly, large changes over long periods of time through a long drawn out campaign. Operational battlefronts are often plagued with poor situational awareness. They’re typically ineffective in communication tactics, highly reactive and often at risk of suffering large losses in both time and money. As we modernize, it becomes necessary and optimal to either quickly introduce new assets or react and safely deploy as many critical updates into the operational battlefront as fast as possible. Hence we begin our mission in this Art of DevOps and begin understanding the procedures behind one of the most aggressive strategies for leveraging a well-planned continuous delivery process.

I will assume that all of you are familiar with the delivery landscape that this battle spans. I’m going to use the metaphor of war because frankly, I find it more appealing and enjoyable to write about it in this context, plus you can better appreciate a non-dry read and, more importantly, so that you can relate to this as a battle—since we’ve all experienced our own share of wounds.

The asset construction zone. This is a moving environment where the commanding officers communicate the assets needed for the overall operational goals. It’s common for engineers to receive orders to research, build, fix or change existing units that must all be thoroughly tested and eventually deployed to the Staging grounds. In a Continuous Delivery deployment pipeline, unlike other delivery processes, front line operations troops become integral to the planning, building and testing stages of the delivery process. In the next series I will go into depth and focus on the Islands of Development. However, instead of just discussing the key practices and technologies that are often found in other articles, I’ll review how to arm your build stages with the advanced performance management.  This will provide these forces with the optimal intelligence to effectively automate, enhance and troubleshoot the quality of each new build and deployment. I’ll also discuss some of the key indicators that, with advanced performance management in your arsenal, will help identify a successful build and/or changes prior to deploying it to the Staging Grounds.

In this environment it is all about battle readiness. This is where we focus our energy on automated testing of every critical scenario while closely monitoring any negative impacts with forensic accuracy. Having highly granular details available to our troops allow us to precisely assess the added and changed assets while quickly identifying and alerting on the problems. Again, in this series, I will focus on the common technologies used while again arming the environment with advanced performance management. I will reveal key strategies and indicators to use during automated testing and automated deployments that will ultimately mitigate key risks prior to deploying a changed build to the frontlines.

Finally I will discuss the frontlines. Here is where the final deployments are put to the ultimate test. Although we put great planning and effort into building and testing each of our deployments, we must also be fully prepared to respond quickly to identify casualties due to inadequate or poor performance. In this environment, it’s absolutely imperative that we plan complete situational awareness and highly effective response times for handling critical issues or, at the very least, maintain the capability to detect when situations are becoming critical. In today’s Operational Battlegrounds, best-in-class communications and monitoring is imperative!  I’ll discuss many DevOps communications and monitoring tactics that will be supported and enhanced by introducing advanced performance management as a key defense of choice. While these tactics are focused on the operational battlegrounds, they can and should be deployed throughout the entire delivery process.

Now that I’ve introduced you to the upcoming series, The Art of DevOps, I will look forward to sharing with you a strategy that will enable you to prepare for modern operational battlegrounds. Continuously delivering the highest quality assets to the front lines – both quickly and reliably – is our mission.  I fully intend for all of us to win this battle.

In subsequent three blogs, I’ll detail how advanced performance management—and Dynatrace in particular— can provides invaluable, deep insight into your environment so that you can:

My goal with these writings is to enable you to deploy and maintain a successful operational battlefield, one that sustains the fewest casualties, and leverages optimum methods for identifying and performing elite rescue operations.

So, until next time…let the battle begin.

What is continuous delivery and what are best practices for implementing it?