Improve the security of your tokens with automated token rotation

Regularly changing your password is a good security practice. Same goes for Dynatrace cluster REST API authentication tokens. Our new cluster-scoped token helps administrators who need to rotate tokens automatically. Until now, the process was cumbersome or even not possible at all. It was required to manually create a token every time and store it in a secure place (for example, Secret Server or a CI/CD service). Moreover, not all tokens were manageable. By providing automation via Dynatrace Cluster API, it's possible to get and control all cluster-context tokens.

To get started, you need to log into the Cluster Management Console and navigate to API tokens in settings. You'll see an extended view and form where you can create different scopes for tokens. The new token scope is called Cluster token management.

To get the interface details, use the Dynatrace API Explorer, which is available from the user menu under Cluster Management API. Select the Cluster API definition.

Since the introduction of Adaptive load reduction with Dynatrace traffic management in version 1.156 we ensure that Dynatrace scales in high-traffic environments and that your network bandwidth is used efficiently. Now we're introducing a similar safeguard concept for high-traffic RUM environments by enforcing a maximum user action count per-minute limit for Dynatrace Managed. The maximum user action count per minute limit, which is specific to your environment, is there to prevent unexpected high consumption of your license volume by unforeseen IT events like unannounced marketing campaigns, unplanned load tests, DDoS attacks, aggressive web scanners, or other. Take a look below to see what the new tile on the Environment settings page looks like and to read the details at What does a 'Max. user actions per minute exceeded' message mean?

To date, dashboards persisted the currently selected timeframe and management zone filter. As this became a source of confusion, we've now made this an explicit configuration step and added a Settings section for dashboards. These settings provide you with control over a dashboard's Default filters. 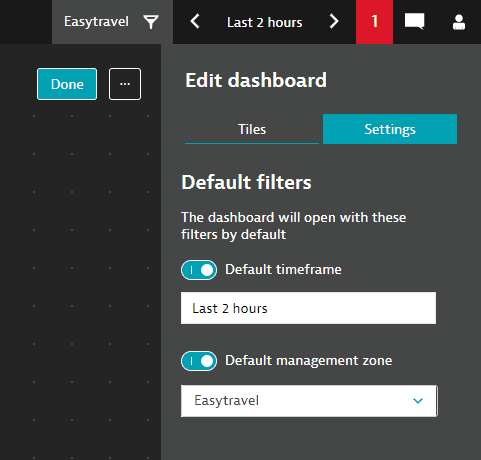 The representation of selected metrics during a select timeframe can be switched from totals to a fixed rate (per second, per minute or per hour). See Create custom charts for details.