Starting with Dynatrace OneAgent and ActiveGate version 1.231, we are upgrading the Extension Framework (also referred to as the plugins framework) from Python 3.6 to Python 3.8.

Permissions specified in the Microsoft documentation for sys.dm_os_performance_counters are required.

Note: Windows Auth and Active Directory (AD) are not supported for connection credentials for this extension.

To install the extension

This section describes how to configure:

When the extension first registers the monitored database with the tenant, it creates a custom device with which all of the collected metrics for this endpoint are going to be associated.

Each SQL Server database monitored through this extension is associated with its own custom device. By default, the name of that custom device the same as the name of the logical database entered into the Database name connection field in the configuration endpoint.

Possible configurable sources for names of the custom device and group:

Configuration of the custom device name 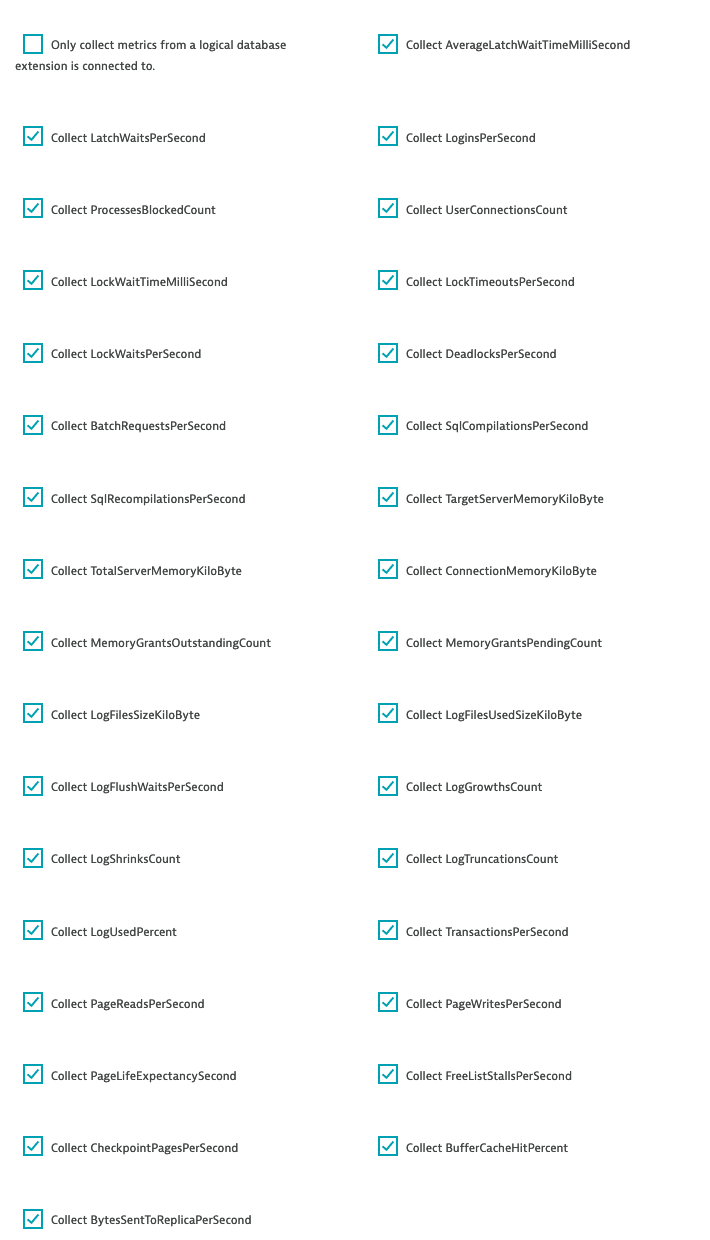 The following metrics are available.

The SQLServer:General Statistics object in SQL Server provides counters to monitor general server-wide activity, such as the number of current connections and the number of users connecting and disconnecting per second from computers running an instance of SQL Server. This can be useful when you are working on large online transaction processing (OLTP) type systems where there are many clients connecting and disconnecting from an instance of SQL Server.

The SQLServer:Locks object in Microsoft SQL Server provides information about SQL Server locks on individual resource types. Locks are held on SQL Server resources, such as rows read or modified during a transaction, to prevent concurrent use of resources by different transactions. For example, if an exclusive (X) lock is held on a row within a table by a transaction, no other transaction can modify that row until the lock is released. Minimizing locks increases concurrency, which can improve performance. Multiple instances of the Locks object can be monitored at the same time, with each instance representing a lock on a resource type.

Compilation is a significant part of a query's turnaround time. To save compilation costs, the database engine saves the compiled query plan in a query cache. The objective of the cache is to reduce compilation by storing compiled queries for later reuse so they don't have to be recompiled if executed again later. However, each unique query must be compiled at least one time. Query recompilations can be caused by the following factors:

Monitoring server and process memory usage to gauge user activity and resource usage can help you to identify performance bottlenecks. Monitoring the memory used by an instance of SQL Server can help determine:

Multiple instances of the Databases object, each representing a single database, can be monitored at the same time.

To limit collection of the metrics in this section to a single logical database, select the Only collect metrics from a logical database extension is connected to checkbox in endpoint configuration.

Monitoring the memory and the counters used by SQL Server helps you determine:

All availability replica performance counters apply to both the primary replica and the secondary replicas, with send/receive counters reflecting the local replica.

Note that, on a given availability replica, some counters will show a zero value, depending on the current role—primary or secondary—of the local replica.

The Microsoft SQL Server remote extension has a low memory footprint, requiring just a few MiB per endpoint after the extension is initialized. Multiple endpoints running on the same host reuse the same objects in memory.

Each endpoint runs once per minute and performs 5-6 lightweight SQL queries to the monitored database to collect the metrics.

By default, the extension collects and reports the following number of metrics each minute:

For example, if an endpoint monitors an instance with 10 logical databases, the number of metrics reported per minute is:

The remote monitoring extension for Microsoft SQL Server employs JDBC connections to query performance metrics from SQL Server instance by connecting to it from ActiveGate.

To take a look at the logs, check the following locations:

When the extension is started successfully by ActiveGate, a separate log directory named custom.remote.python.mssql is created for it. The logs for the MS SQL extension contain all details about connection problems, SQL Server issues, and issues with the extension itself.

Support for ActiveGates running on Red Hat 7.x, while initially offered, has been discontinued due to incompatibility between the binary dependencies of the extension and the older Linux kernel of RHEL 7.x generation.

ImportError: DLL load failed: The specified module could not be found.

Error (No value available yet for metric)

One of the performance counters expected by the extension returns null when queried. This might happen with the BytesSentToReplica metric, for example. To solve this, clear the checkbox with this metric in the endpoint configuration.

Extension collects no other metrics except for Availability

That means the extension is unable to collect performance counters from the database. Usually, there is a Rows fetched: -1 for the failing query in the logs, which indicates that a certain group of metrics cannot be collected.

This issue can be caused by the wrong connection parameters (for example, missing instance name in the Connection host field), which causes the extension to issue invalid metric collection queries to the server. It is worth checking that the query listed in the logs alongside the Rows fetched: -1 message actually returns any results when executed manually somewhere else using the exact same connection parameters as in the endpoint configuration.

This message can be seen in the logs and it does not represent any actual errors. It is logged for the debug purposes and can be safely ignored.

The message signals that there are multiple processes attempting to use the same JVM to initiate JDBC connections to the database and, instead of starting a new JVM process, they are reusing the same one.

To restart the extension, use one of these options: