Set up Dynatrace OneAgent as a Docker container

This topic explains how to run OneAgent as a Docker container, as opposed to the standard script-based Linux installation approach.

Running OneAgent as a Docker container gives you full-stack visibility into your complete containerized environment. This includes deep monitoring of supported applications, services, and databases.

The OneAgent container image can also be used for deployment on Kubernetes, Google Kubernetes Engine, and Red Hat OpenShift.

OneAgent deployment via Docker container is supported for Docker Engine versions 1.10 - 1.13.1, 17.03+ CE and EE and is available only for Linux-based hosts. Installation within the container isn't supported. For more information, see the limitations of this deployment model.

The first step is to obtain the location for ONEAGENT_INSTALLER_SCRIPT_URL. This information is presented to you during OneAgent installation.

This is the URL:

This is the token:

Replace the value of arch parameter with <arch>. Ignore the flavor=default parameter.

This your URL and API token. 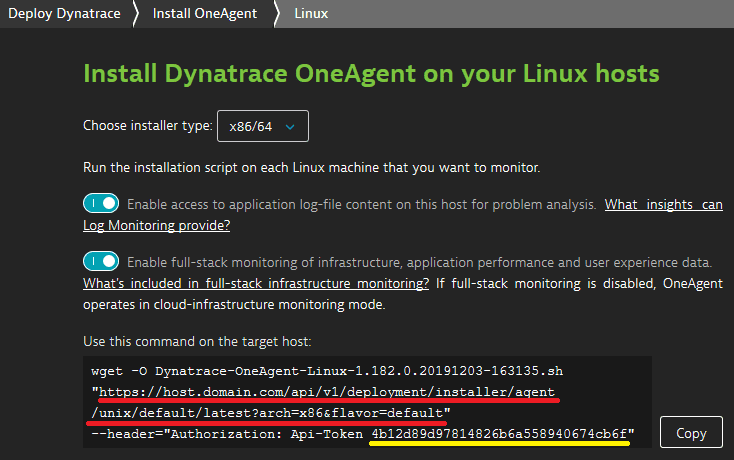 Append the API token to the URL using the API-Token parameter. Your URL should look like this:

Run OneAgent as a Docker container

To run OneAgent as a Docker container you need to execute the following docker run command on all your Docker hosts:

Pass the URL you determined earlier as the value of ONEAGENT_INSTALLER_SCRIPT_URL environmental variable.

You can alternatively perform a custom installation with command-line parameters.

OneAgent is what is referred to as a "super-privileged container." It's designed to have almost complete access to the host system as a root user. The following Docker command options open selected privileges to the host:

--pid=host - Allows processes running inside the container to see and work with all processes in the host process table.

-v /:/mnt/root - Mounts the host's root directory into the container at /mnt/root to enable the installation of OneAgent on the host at /opt/dynatrace.

Note: OneAgent executes these commands in the context of the container. Consequently it won't report the metrics related to the disks of underlying hosts. See the limitations below.

To update OneAgent on Docker containers

Follow the instructions that correspond to how you've installed OneAgent