Dynatrace can accompany you in your IBM Z modernization journey to hybrid cloud infrastructure with end-to-end observability from the mainframe to the cloud, and everything in between. Dynatrace can also provide transactional insights into your workloads from the mobile frontend down to mainframe programs so that you can troubleshoot anomalies on the code level.

Learn how Dynatrace addresses the most typical mainframe challenges:

Is the mainframe part of the problem?

The AI-powered fault domain isolation pinpoints the root-cause of problems and assesses their user impact so that you can prioritize mitigation strategies and reduce the mean-time to repair. 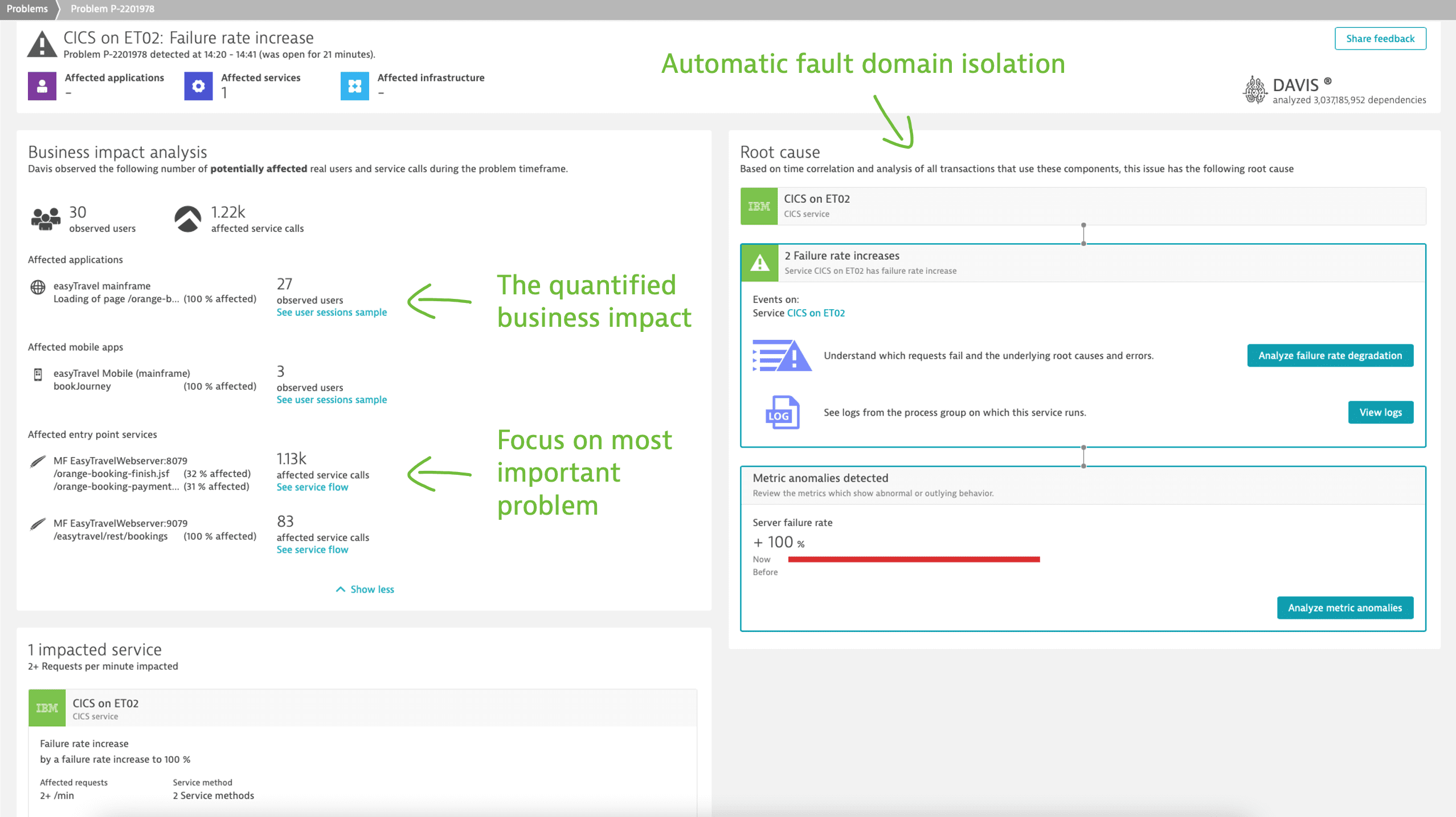 All monitored LPARs, regions, and applications are contributing to this fault domain isolation. 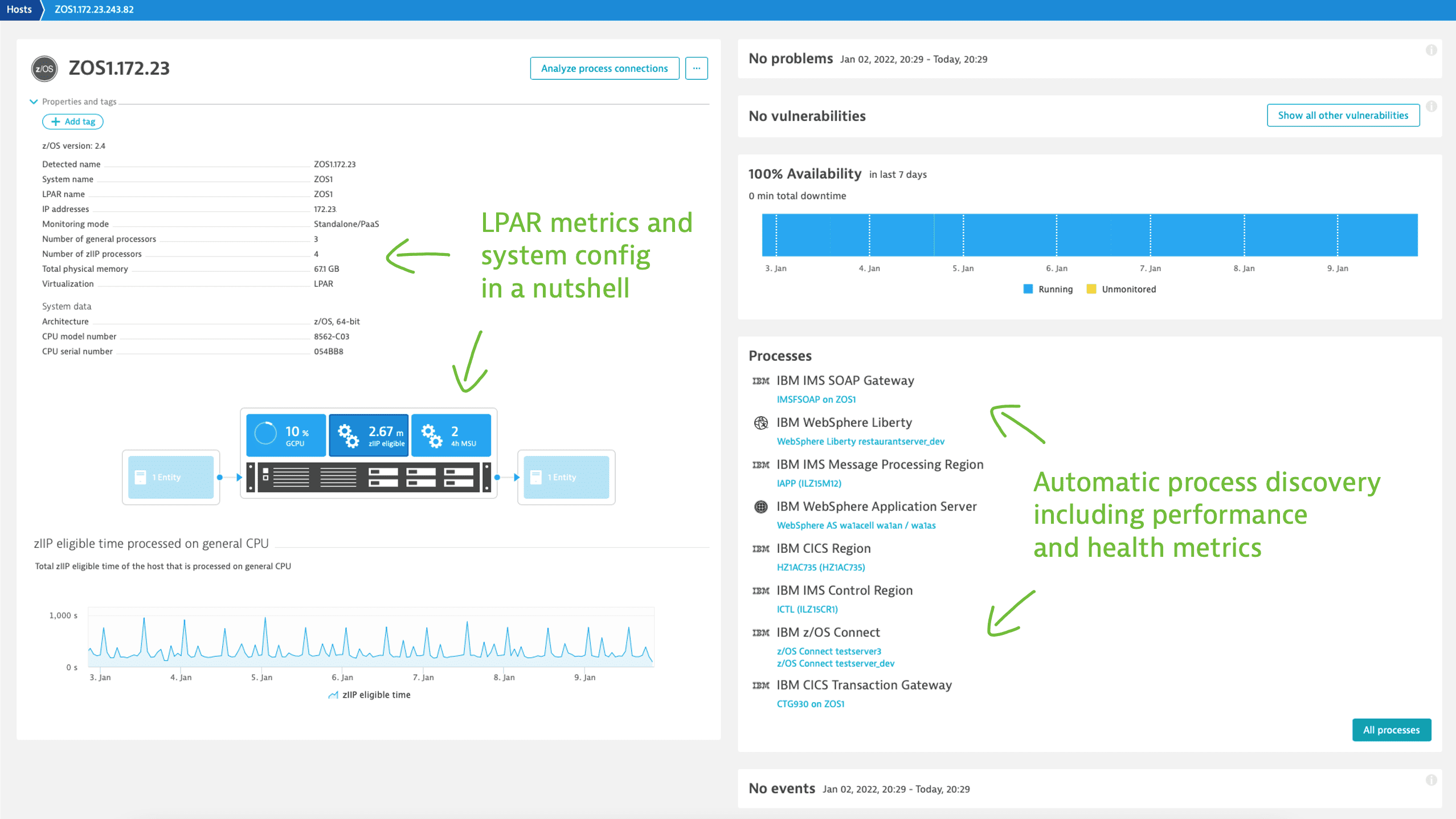 Who is calling the mainframe and how often?

What transactions are expensive or slow?

Analyze the performance of your transactions using the Service flow to verify if they fulfill the defined SLOs with service-level metrics. The request count for example can indicate when a transaction is called too often from an open-system, which could result in additional costs. 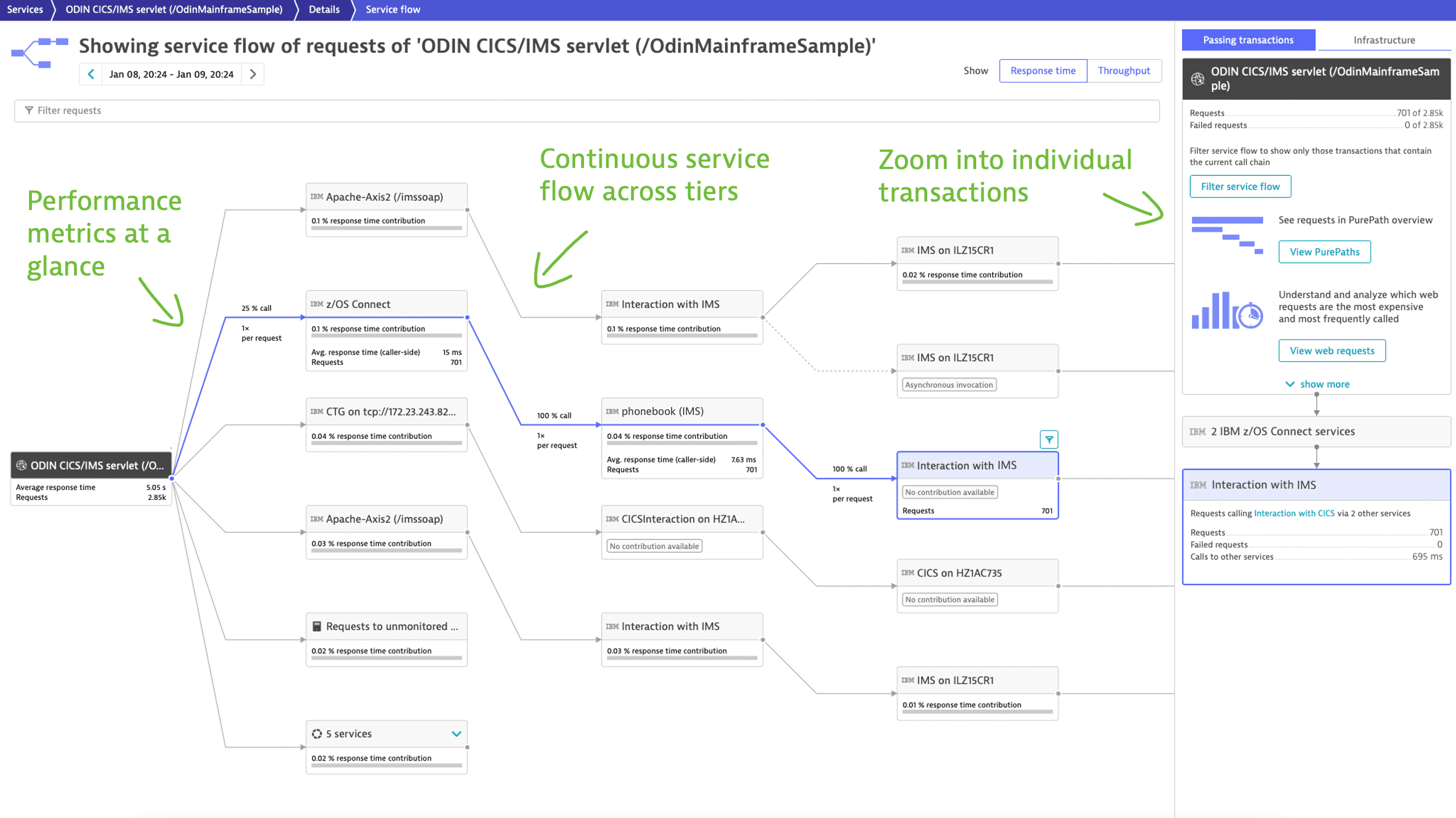 Use the PurePath distributed traces code-level insights to optimize your programs. 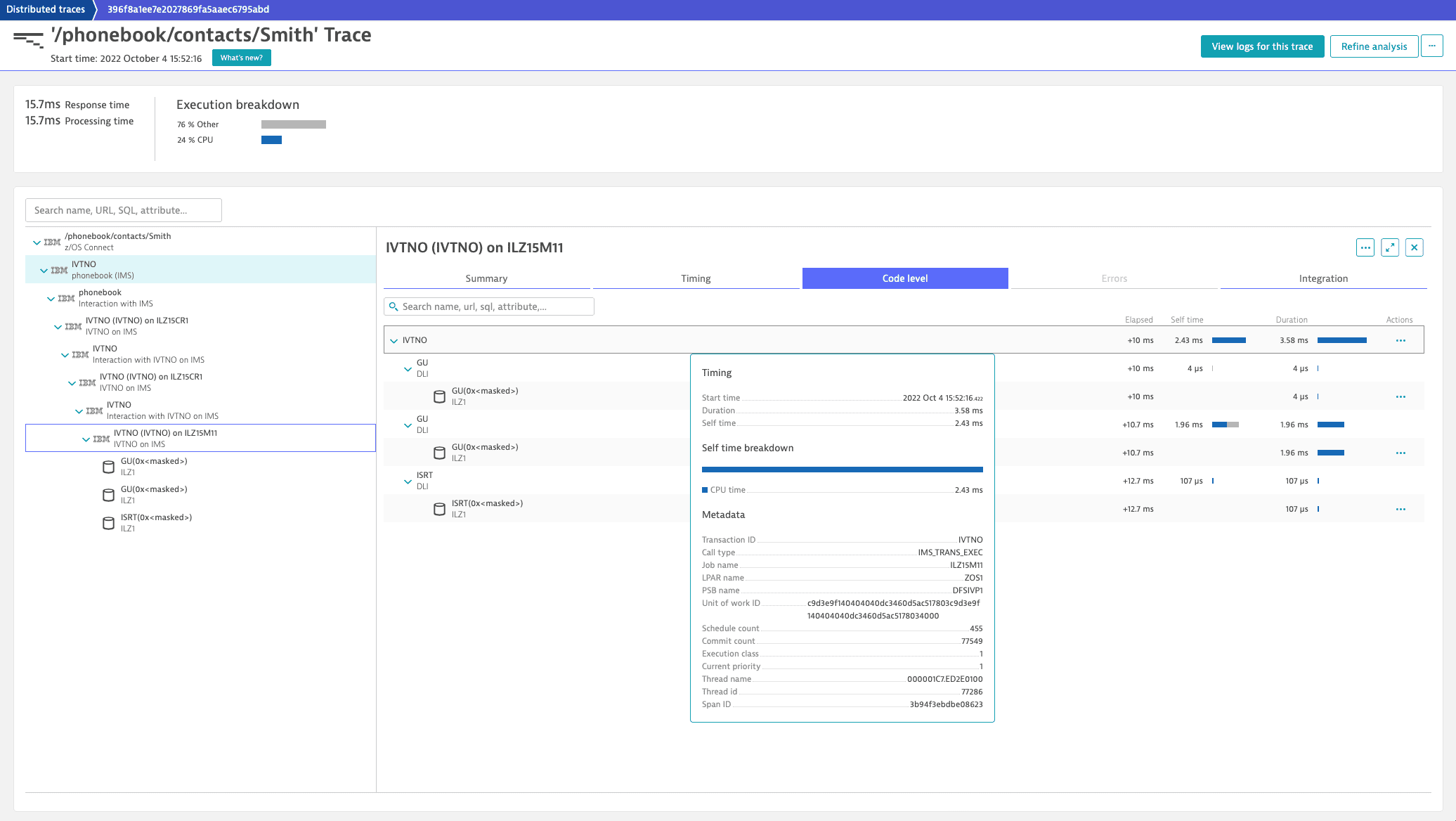 Use Dynatrace to ensure business continuity for traditional environments by monitoring middleware technologies like enterprise service buses or message queues. While transforming your mainframe programs to make them accessible for cloud functions with z/OS Connect EE, monitored by Dynatrace.

See the end-to-end trace from z/OS Connect EE down to an IMS DL/I database below. 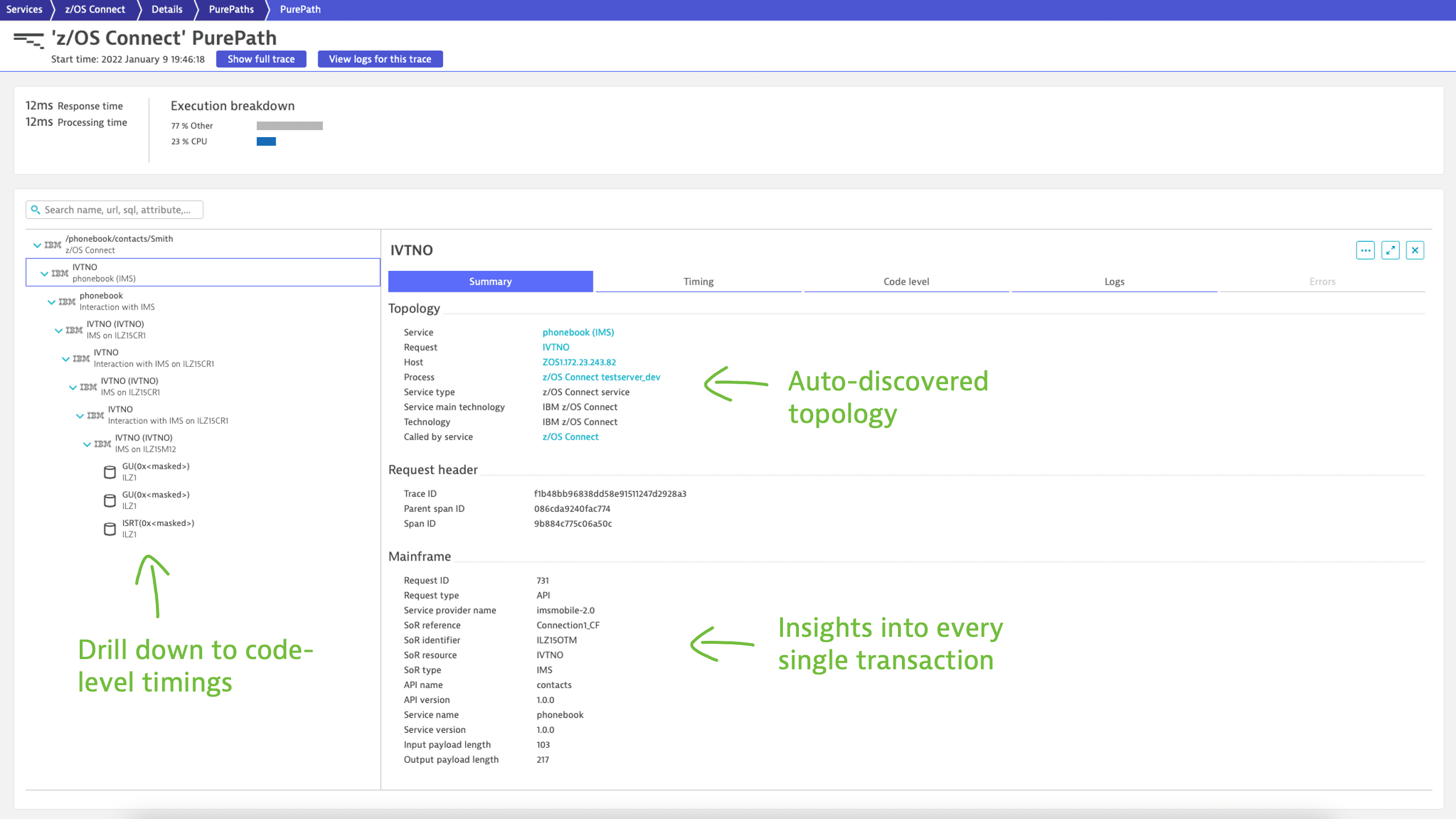 Dynatrace provides code modules for CICS, IMS, and z/OS Java technologies so that you can achieve seamless observability with trace and metric insights. To learn more about the supported technologies, see Technology support.

The CICS, IMS, and z/OS Java code modules interact with the Dynatrace z/OS Data Collection subsystem (zDC) via shared buffers. The zDC subsystem controls communication between the code modules and the zLocal. The zLocal, hosted in the z/OS Unix system services (USS) environment, runs as part of zDC. It handles the TCP/IP connection and transfers monitoring data from the code modules to the zRemote module.

The zRemote module processes monitoring data received from the zLocal and routes that data, compressed and encrypted, via its local ActiveGate to Dynatrace. Hence, the zRemote module offloads much of the processing work from the code modules incurred in instrumenting subsystems and applications to an open system.

Monitoring of the CICS, IMS, and z/OS Java code modules are consumed based on million service units (MSUs). Therefore, z/OS monitoring doesn't contribute to the consumption of host units or host unit hours.

Who needs to be involved in a typical Dynatrace for z/OS installation?

To find the procedure and the people involved people, see z/OS installation overview.

How much CPU time do code modules consume while instrumenting subsystems and applications?

The code modules consume some CPU time while instrumenting subsystems and applications on IBM Z, but this overhead is typically very low (in the range of 1%-2%, depending on the type of monitored transactions). See the examples below.

What does a volatile service mean and how can I solve related problems?

No, the CICS and IMS code modules can only capture static SQL statements.

Can I use span attributes captured by the z/OS Java code module as request attributes?

Yes, you can create Request attributes for any captured span attribute. To do so

To learn more details about span attributes and how to capture them, see Span settings. 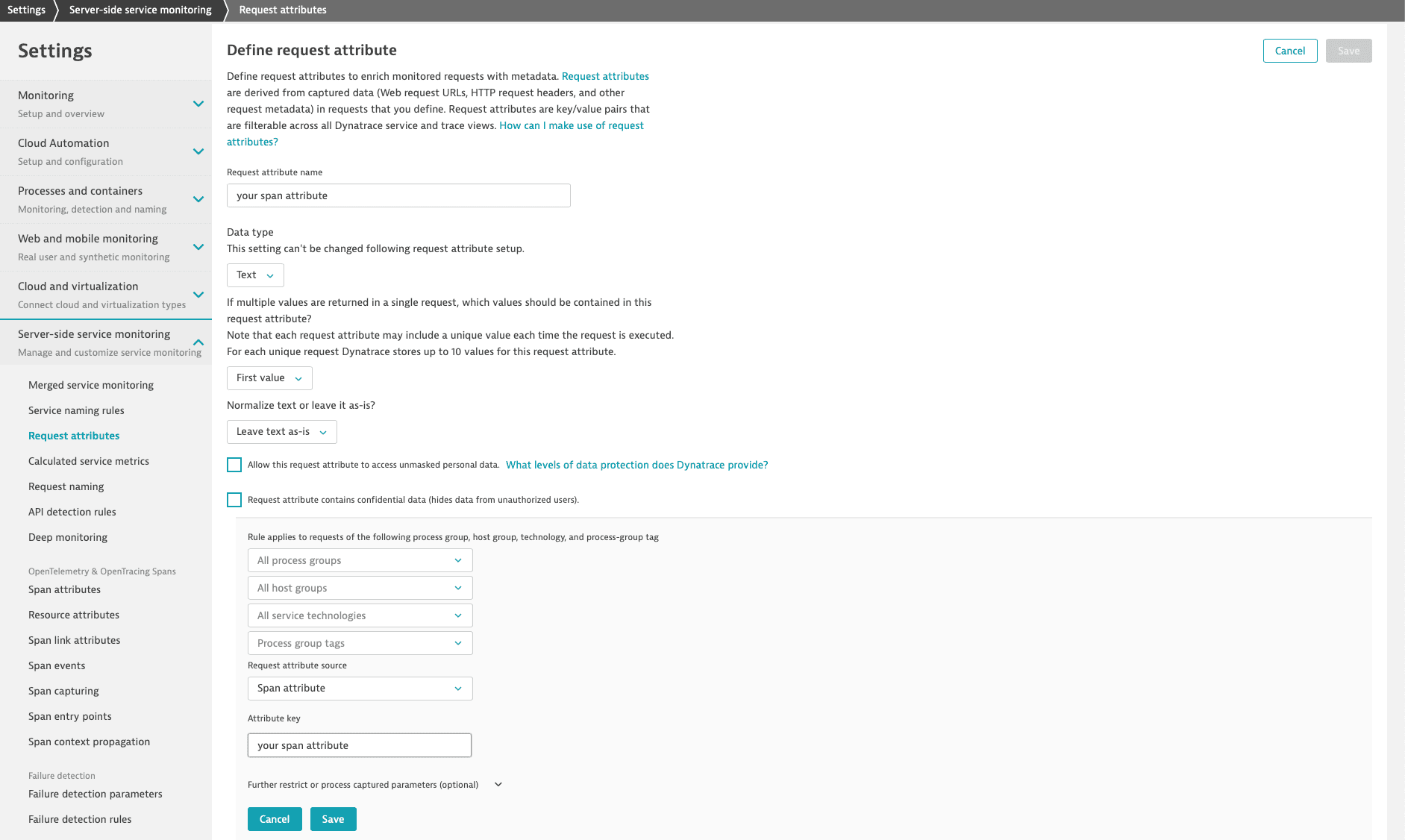 No, process groups created by the z/OS Java code module can't be modified or merged.

As an alternative you can organize your process groups by defining metadata or defining tags based on environmental variables. Both concepts apply to z/OS Java as well.

Note at you can define environment variables only on the process level, not on the host level.

Can I use host groups to organize multiple LPARs?

How does the CICS/IMS code module instrumentation work?

Both code modules use hooks to instrument IBM MQ, DB2, and DL/I.

No byte code instrumentation is used by the CICS and IMS code modules.

With Dynatrace, you can get observability for the Linux operating systems on IBM Z and LinuxONE mainframes using OneAgent on Linux. To learn more about supported Linux distributions on the s390 architecture, see Technology support.

Monitoring of OneAgent on Linux is based on host units consumption.