The following image shows an example of an opaque CouchDB service, a technology that is supported by Dynatrace but for which code-level visibility isn't available. CouchDB is a supported technology, but only at the metric and process level; Dynatrace doesn't provide code-level insights for CouchDB. 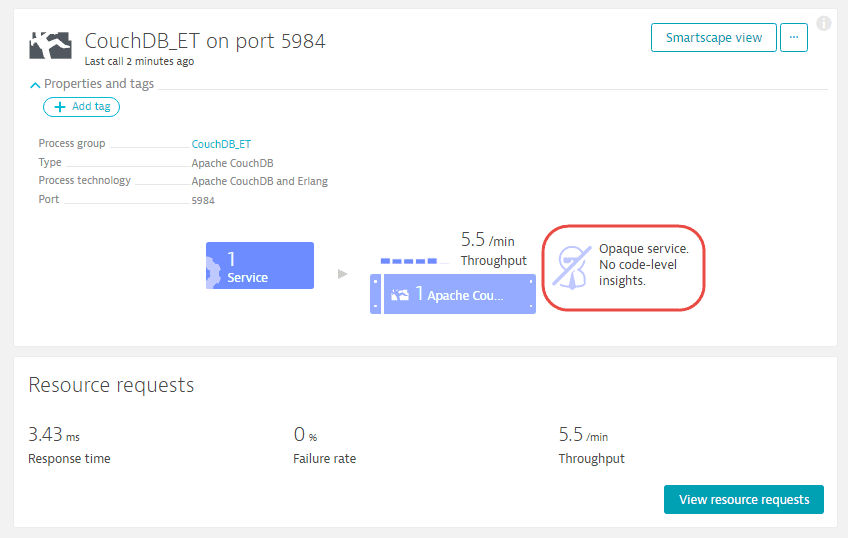 The following image shows an example of a service that is considered opaque because it is of an unrecognized technology. Since the technology isn't known, no commercial logo can be included to denote the service. This is why a cog icon is included to signify the service. As shown in the example below, although deep monitoring isn't supported for this service, Dynatrace can still detect all requests to this service that are sent by monitored services and, for example, calculate the relevant response times and failure rate.

Note that opaque services of unrecognized or unsupported technologies are still included in Smartscape. This ensures a complete representation of your infrastructure’s topology, even when your environment includes opaque services.

The Dynatrace OneAgent SDK enables you to instrument your application manually to extend end-to-end visibility for unrecognized or unsupported technologies.

Other reasons services may be classified as opaque

There can be cases where a service is considered opaque even when the service is recognized and of a supported technology. This can occur for the following reasons: