Visualize your environment topology through Smartscape

To access the Smartscape environment-topology view, in the Dynatrace menu, go to Smartscape topology.

Each Smartscape tier includes a dedicated tab with a health indicator. In the first example image below:

Note: Smartscape displays data from the past 72 hours and therefore can't be adjusted using the timeframe selector. To view the dependencies among entities of the same tier, just select the associated tab on the left.

In this example, the Applications tab is selected and the 12 detected applications in this environment are displayed on the right. 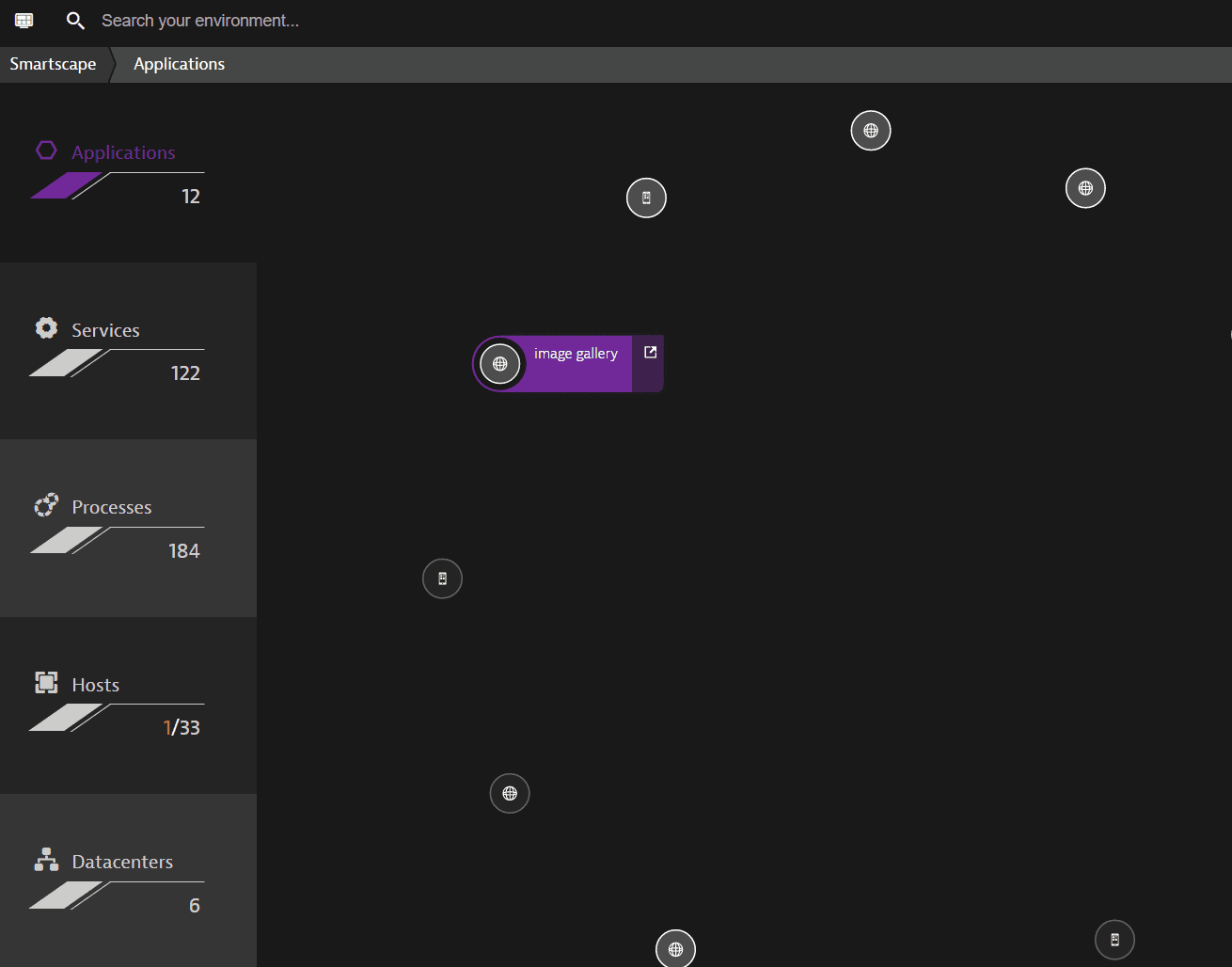 There are no application connections or dependencies because, in Dynatrace, applications are viewed from the perspective of the user and therefore only constitute user endpoints. Therefore, multiple applications may use the same services, but applications can't be connected directly to one another.

The Services tab displays the topology of all the services that are running in your environment. 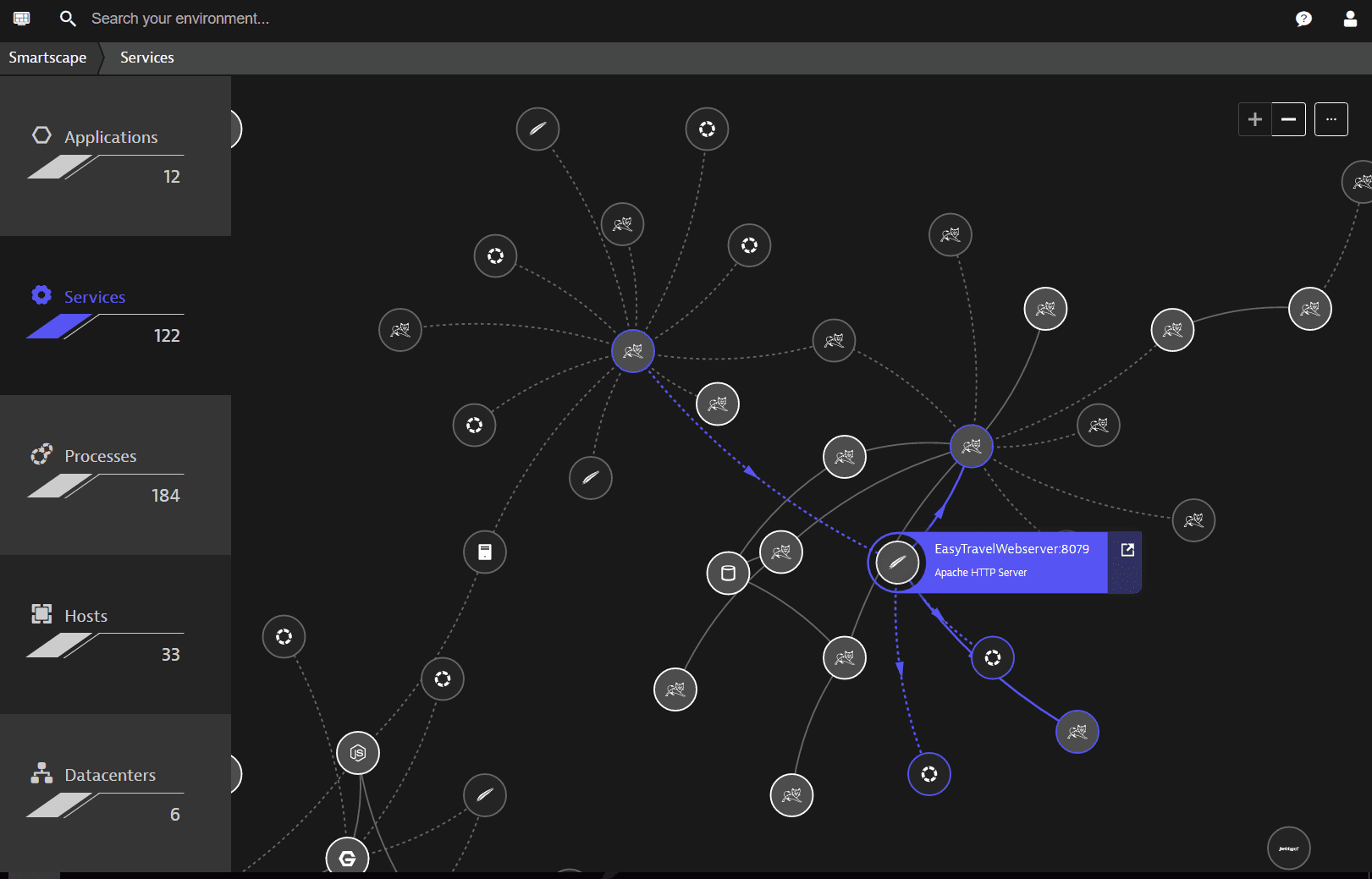 Each node represents a different service with a symbol that signifies the underlying service type.

Filtering your display
Open the Browse (…) menu in the upper-right corner of Smartscape to hide or show:

Note that you might observe a difference in the number of services presented in Services tab of the Smartscape topology page versus the Services page. This is because Smartscape takes a broader scope of service categories into account.

The Processes tab provides a visualization within which each node corresponds to a process and each connection represents a TCP/IP request. 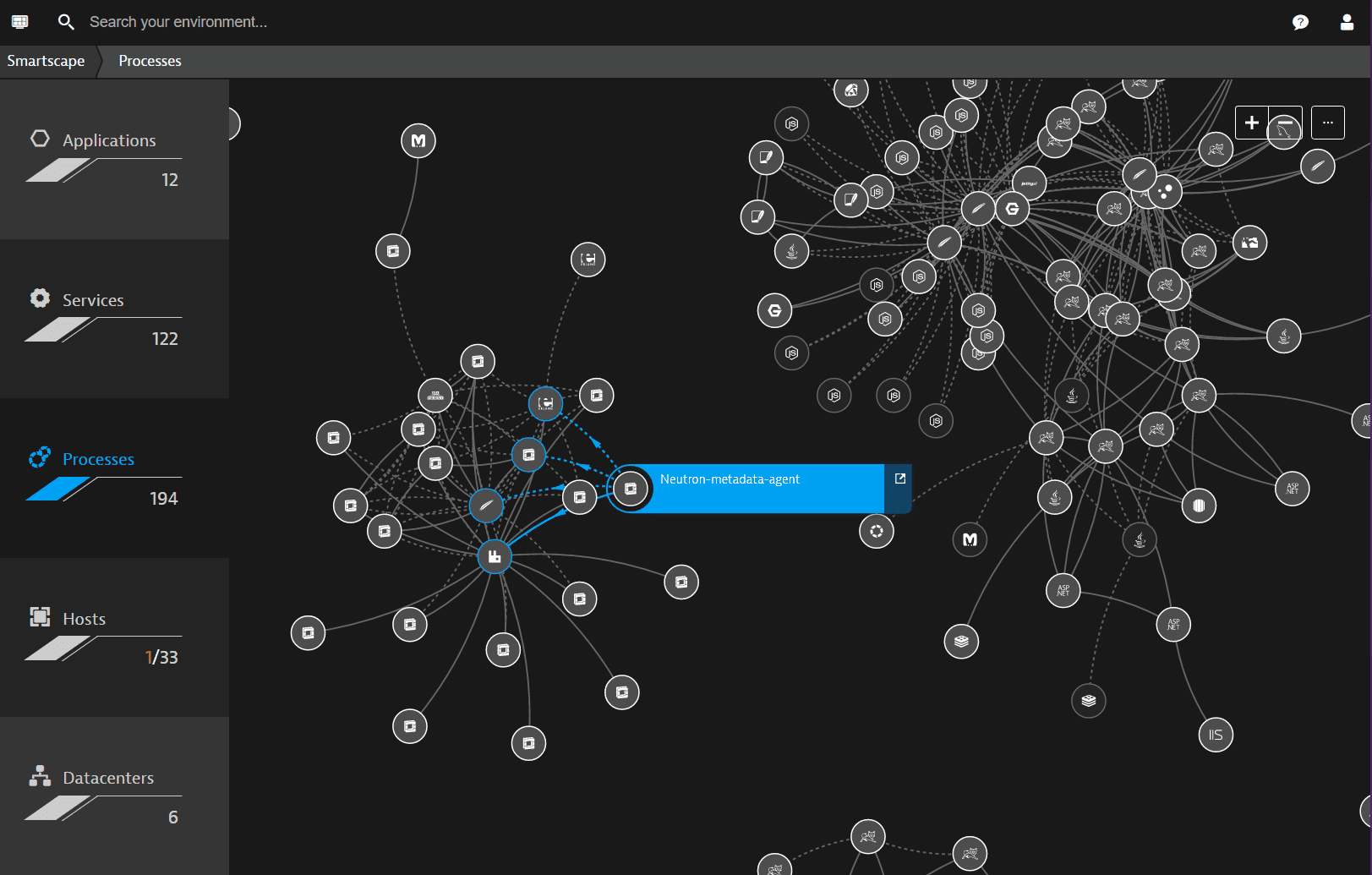 The Hosts tab shows the topology of your infrastructure from the perspective of your hosts. 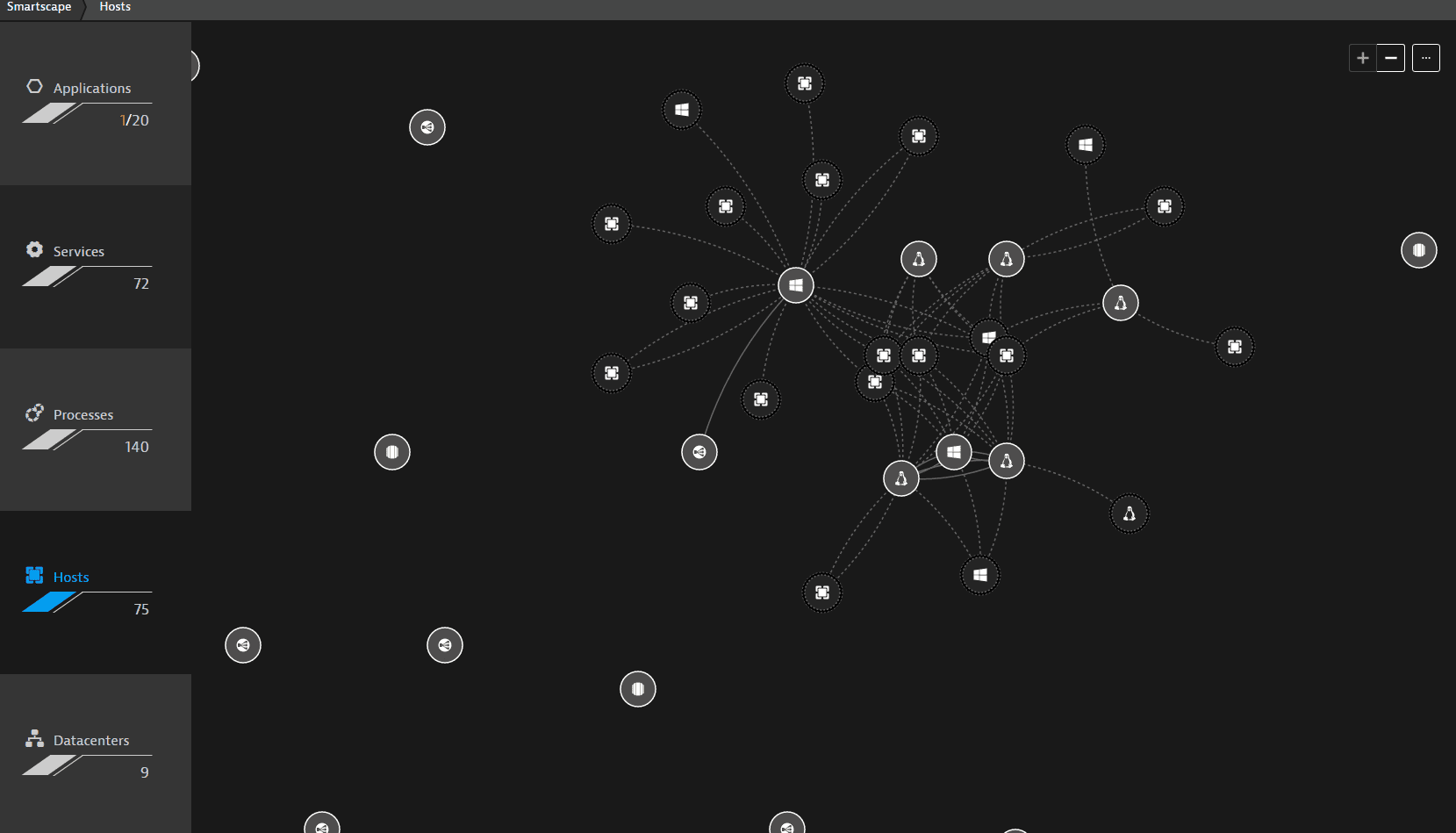 The Data centers tab displays nodes that indicate where your hosts reside. If you have physical servers in your infrastructure, the corresponding data center nodes indicate the cities where the data centers are located. These are signified with generic host icons.

If you use virtual servers or you have a PaaS-based infrastructure, the data center nodes will be labeled accordingly (for example, VMware data center, AWS Availability Zone, or Azure region) and visualized with the corresponding company logos. 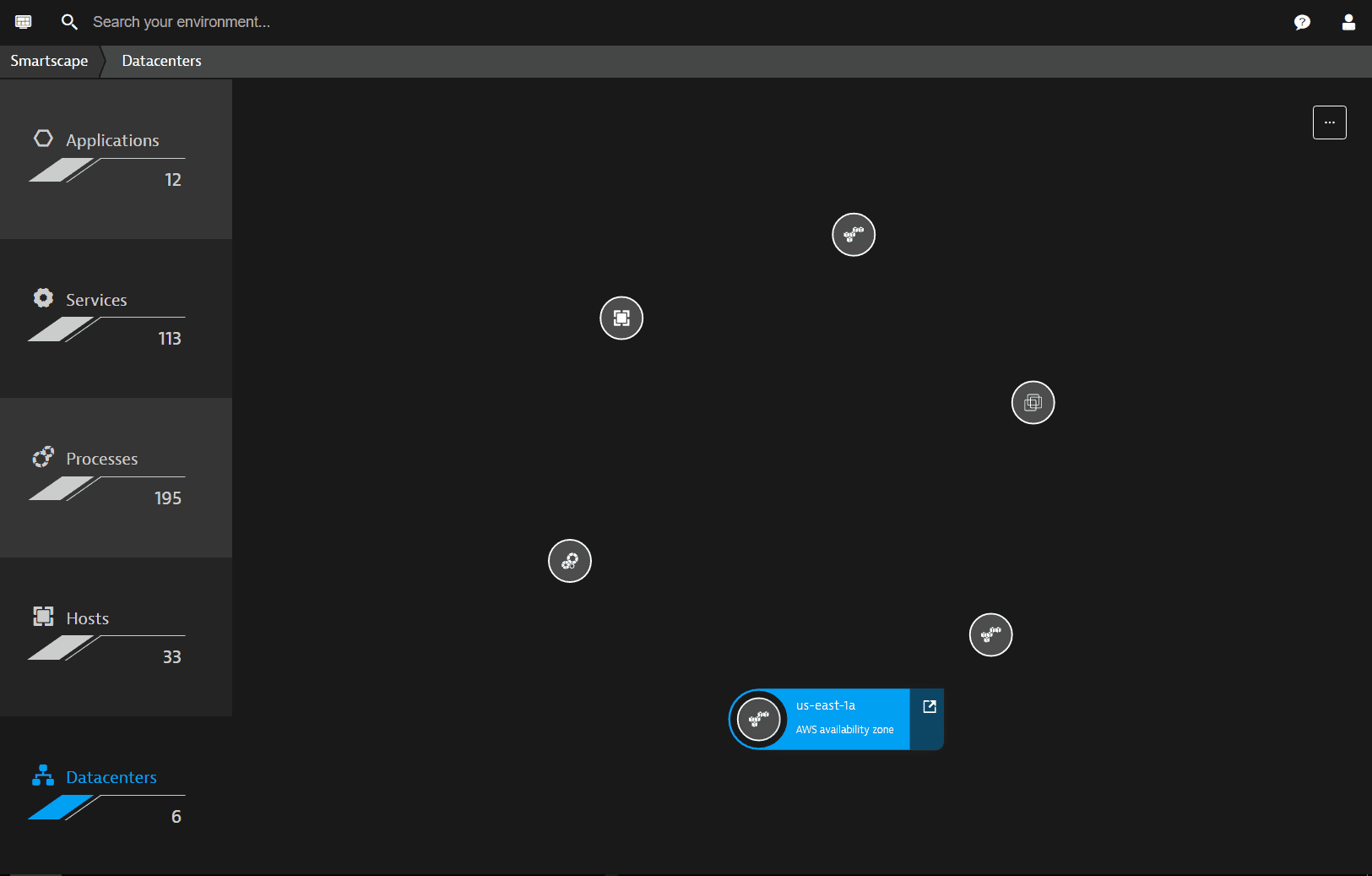 To view cross-tier connections, select any entity in any Smartscape tier. The vertical dependencies of the entity are then displayed on the left.

In this example, a web application called easytravel-dynatrace-dev is selected. On the left you can see how the application dependencies extend downward to the data centers tier. 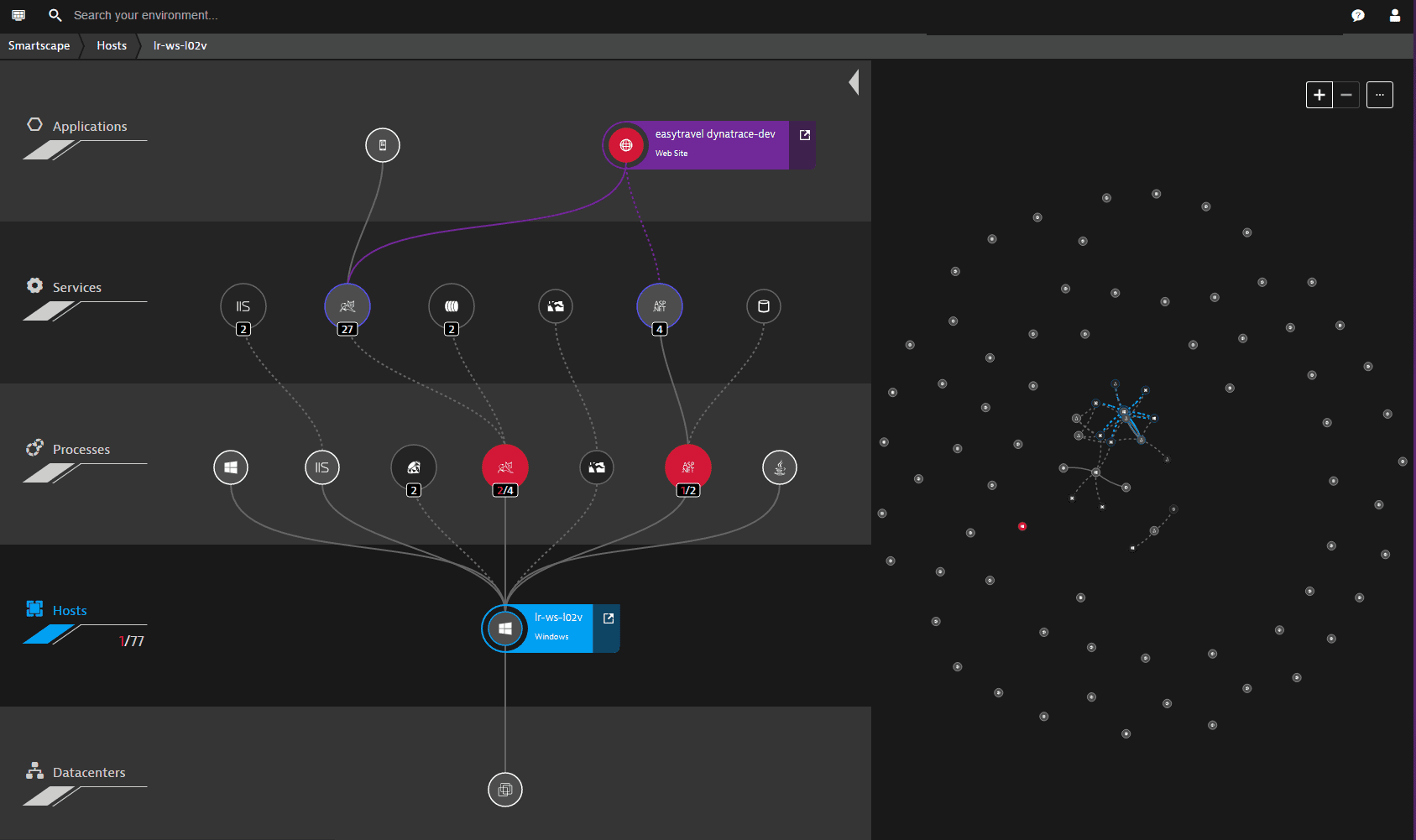 The easytravel-dynatrace-dev application is red because it's experiencing a problem. Moving downward through the related dependencies, we can see that this application calls 27 Tomcat services and 4 ASP/.NET services. These services run on processes of the same technology types (those shown in red are experiencing problems). You can see that these processes reside on a Windows-based host called lr-ws-l02v (to see this detail, hover your cursor over the host node). Because the unhealthy processes are running on this host, this host is also unhealthy (note the red 1 on the Hosts tile on the left).

This example reveals how you can easily discover the root cause of a problem and reduce problem resolution time by exploring the related entities in Smartscape.