When web requests and beacons (Real User Monitoring signals) are directly sent to an instrumented server, Dynatrace identifies the IP addresses of your end users' devices via the socket connections.

However, when uninstrumented components such as load balancers, CDNs, or proxies are used, the remote IP address is different from the original IP address. For such cases, Dynatrace also watches certain HTTP headers. These headers are most frequently used for identifying the originating IP address when a client connects to a web server through an HTTP proxy, a CDN, or a load balancer.

To view which headers Dynatrace watches by default, go to Settings in the Dynatrace menu, and select Web and mobile monitoring > IP determination. These headers are processed in a specific order, but you can change the processing order and add your own headers.

Keep in mind that Dynatrace masks the last part of user device IP addresses by default.

Dynatrace Real User Monitoring tries to assign every user session a geolocation (city, region, and country) in order to group user sessions and user actions per location and show them on the world map.

You can request that MaxMind update their database by submitting the form at https://support.maxmind.com/geoip-data-correction-request/.

You can check your IP address against the MaxMind database at anytime using the form at https://www.maxmind.com/en/geoip-demo.

When an IP address is changed by MaxMind, the mapping in your Dynatrace environment is updated with the Dynatrace version following the change. You can check your mapped IPs in Dynatrace. In the Dynatrace menu, go to Settings > Web and mobile monitoring > Map IP addresses to locations.

If you discover an error in MaxMind mapping or if it doesn't include enough detail, you can overwrite any individual entry with your own IP address mapping rule. 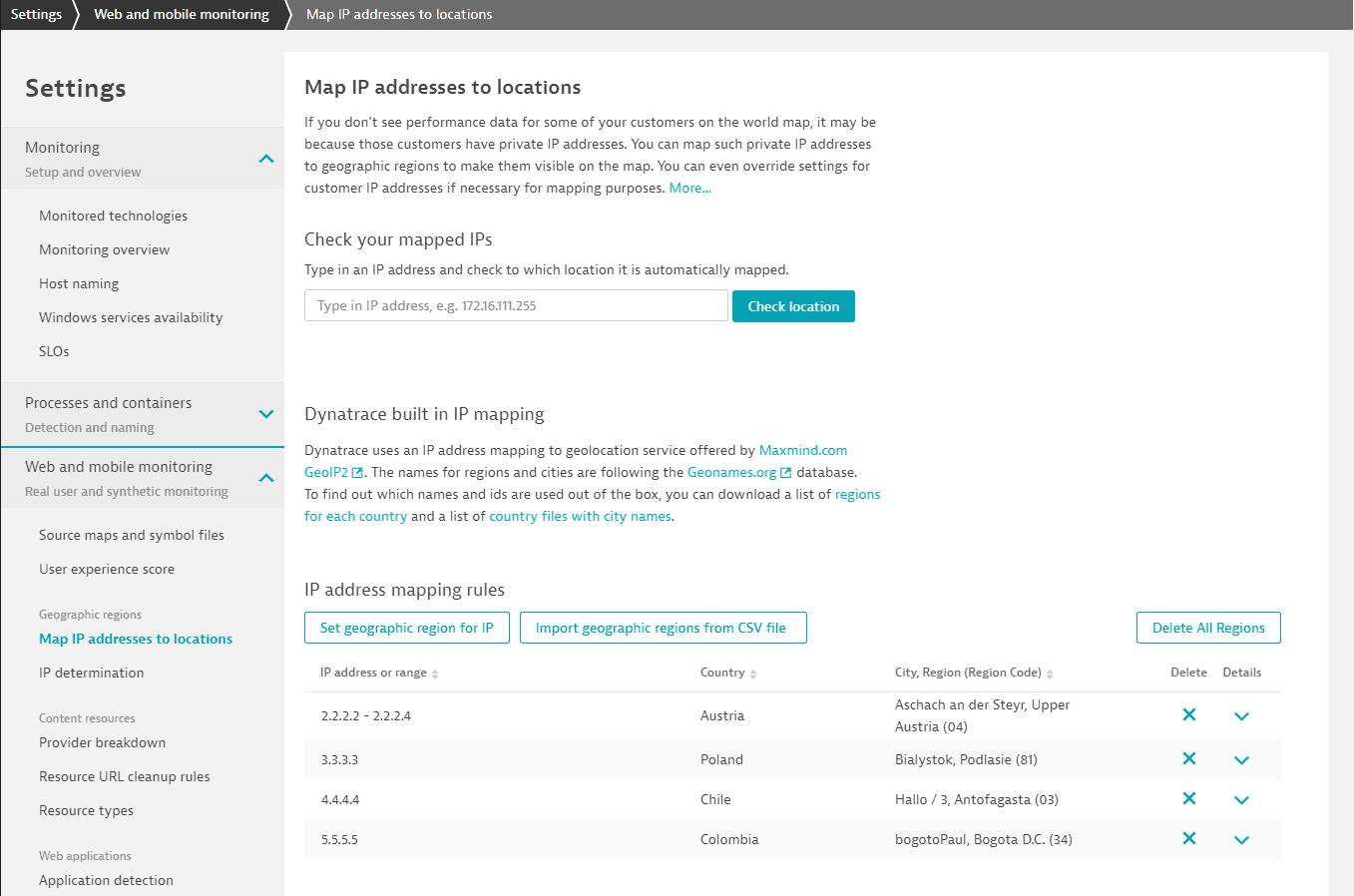 For mobile apps, Dynatrace uses the coordinates from the device (GPS or Wi-Fi) if the app has the permission to use this information, and then Dynatrace calculates the city that is closest to the reported GPS location. If the mobile app doesn't have permission to access geolocation information on the mobile operating system, it uses the IP address to determine the geolocation in combination again with the MaxMind Geo2 database.

For web applications, distinguishing user sessions of real users from synthetic and robots is based on the user agent string sent by the browser. This string is also used for the identification of operating systems and device types like desktop, tablet, or mobile. For browser classification, Dynatrace uses the www.udger.com user agent database. Starting with Dynatrace version 1.218+, ISPs are detected based on their IP addresses against the MaxMind database.

Regarding mobile apps, device names are provided by Google Play Store for Android, while for iOS Dynatrace maintains a cross-reference list that maps Apple device IDs to Apple device names. The operating system—Android or iOS—is provided by Dynatrace OneAgent for mobile. As for web applications, ISPs are detected via a lookup of the user's device IP address in bgp.potaroo.net and www.cidr-report.org.