How problems are detected and analyzed

Problems in Dynatrace represent anomalies in normal behavior or state. Such anomalies can be, for example, a slow service response or user-login process. Whenever a problem is detected, Dynatrace raises a specific problem event indicating such an anomaly.

Raised problems provide insight into their underlying root causes. To identify the root causes of problems, Dynatrace follows a context-aware approach that detects interdependent events across time, processes, hosts, services, applications, and both vertical and horizontal topological monitoring perspectives. Only through such a context-aware approach is it possible to pinpoint the true root causes of problems. For this reason, newly detected anomalous events in your environment won't necessarily result in the immediate raising of a new problem.

Dynatrace continuously measures incoming traffic levels against defined thresholds to determine when a detected slowdown or error-rate increase justifies the generation of a new problem event. Rapidly increasing response-time degradations for applications and services are evaluated based on sliding 5-minute time intervals. Slowly degrading response-time degradations are evaluated based on 15-minute time intervals.

The methodology used for raising events with automated baselining is completely different from that used for static thresholds. Static thresholds offer a simple and straightforward approach to defining baselines that works immediately without requiring a learning period. We don't recommend static thresholds however due to the following shortcomings:

The preferred automated, multidimensional baselining approach works out of the box, without manual configuration of thresholds. Most importantly, it automatically adapts to changes in traffic patterns.

Note that Dynatrace allows you to adjust the sensitivity of problem detection either by adapting the static thresholds or by deviating from automated baselines.

Once a problem is detected, you can directly analyze its impact on the problem's overview page. Dynatrace offers both user and business impact analysis. The problem overview page also provides root cause analysis.

To identify the root cause of a problem, Dynatrace follows a context-aware approach to detect interdependent events across time, processes, hosts, services, applications, and both vertical and horizontal topological monitoring perspectives.

The following scenario involves a problem that has as its root cause a performance incident in the infrastructure layer. 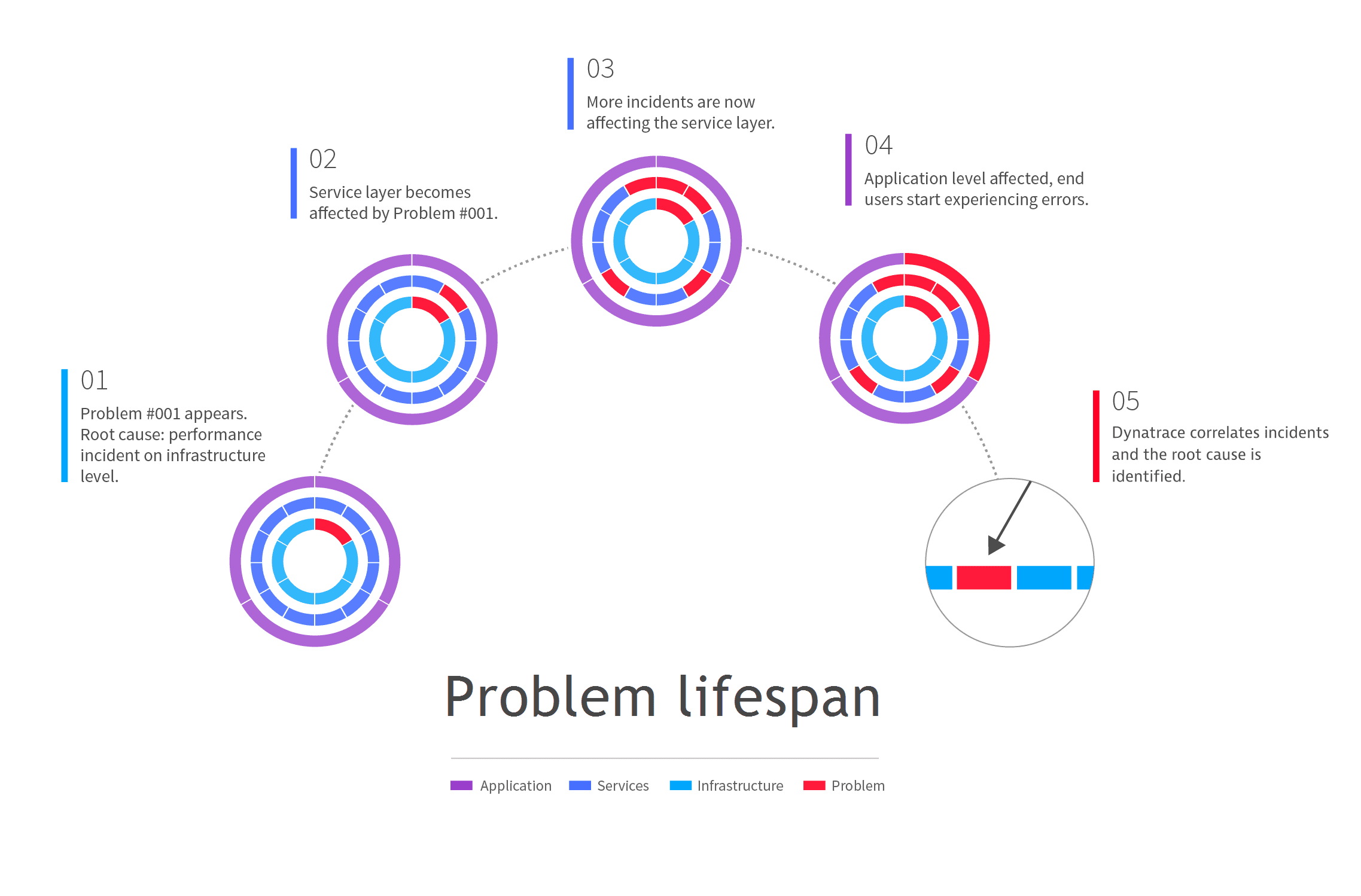 When Dynatrace Davis AI detects multiple problems that occur within 30 minutes of one another and share the same root cause, the problems are identified as duplicates.

Upon the detection of an anomaly, Dynatrace can generate an alert to notify the responsible team members that a problem exists. Dynatrace allows you to set up fine-grained alert-filtering rules that are based on the severity, customer impact, associated tags, and/or duration of detected problems. These rules essentially allow you to define an alerting profile. Through alerting profiles, you can also set up filtered problem-notification integrations with 3rd party messaging systems like Slack, HipChat, and PagerDuty.