Dynatrace Pattern Language (DPL) is a pattern language that allows you to describe patterns using matchers, where a matcher is a mini-pattern that matches a certain type of data. For example, INTEGER (or INT) matches integer numbers, and IPADDR matches IPv4 or IPv6 addresses. There are matchers available to handle all kinds of data types.

You can use DPL with DQL parse command to parse a record field into multiple output fields, or in Log and event processing to reshape incoming data for better understanding, analysis, or further processing.

A written pattern is interpreted from left to right, ignoring extra whitespaces, line breaks, and comments in between. You can write the pattern describing an integer followed by a single space, IP address, and line break as the following one-liner:

Or you can write the same pattern in a more explanatory way:

You don't necessarily need all data elements in the input data for analysis. For instance, field separators or end-of-record markers in a log line are useful only for parsing, but we don't need them when we run the queries. All matchers in a defined pattern must match, but only a subset of them may also extract (parse) data.

A matcher will extract data only when it has been assigned an export name - this is an arbitrary name of your choice, which becomes the name of the field you use in query statements.

In the following example, the pattern has: 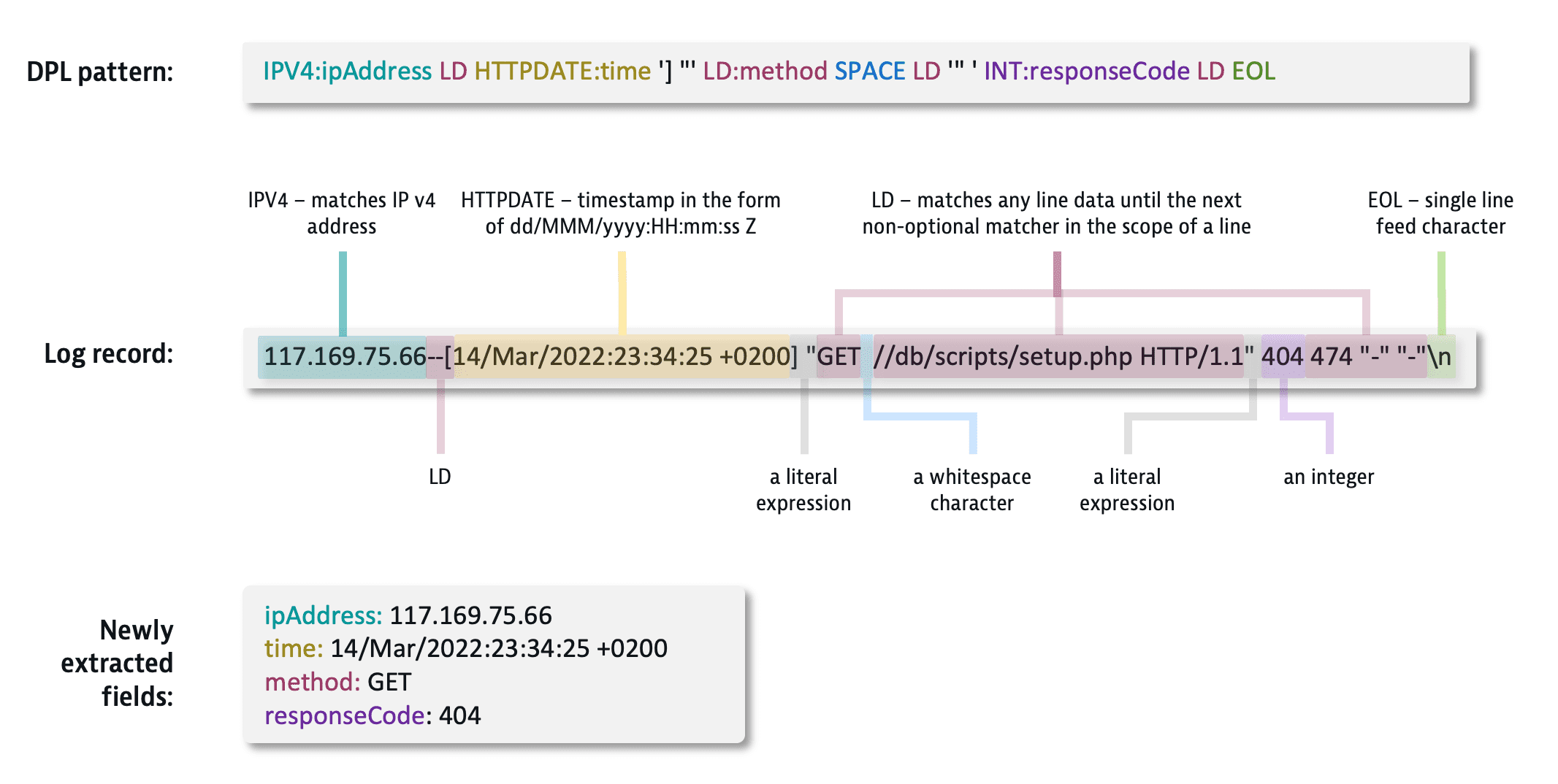 A DPL pattern consists of one or more matcher expressions. They can be separated by whitespace or commas or newlines. For a handy reference guide to all matchers, see the DPL Grammar page.

In general, a matcher expression can be any of the following:

Matcher expressions can be grouped:

A matcher expression consists of the matcher itself and optional controlling elements (modifiers) arranged in the following order (from right to left, where square brackets indicate optional elements):

Note that whitespace characters and newlines are allowed between the elements. Placing elements in a different order (for instance, by placing mod_optional after the export_name) will cause a syntax error.

The following is an example of step-by-step pattern matching.
Suppose we have a comma-separated record (terminated with the line feed character) with the following fields:

This structure can be described by the following pattern expression:

The pattern matching engine tries to apply the pattern by utilizing matchers in the order in which they were defined. The example above starts by trying to match INT:seq at the first byte of input data. This happens to be 1. As it is suitable for an integer type, it moves on to the next byte.

Next, the engine finds the byte to be a comma. This does not match with an integer, so the INT:seq matcher is completed by converting 1 to an integer and the next matcher in the pattern is selected: ','. The engine tries it for a current position of data and finds a match.

So the data pointer is moved on to the next byte (pointing to the first letter of bob). As the constant string matcher contained just one character, the matcher is considered complete and the engine takes the next one in the pattern: [a-zA-Z0-9]*:uname. The quantifier * forces [a-zA-Z0-9]*:uname to consume a variable number of bytes (zero or more), so it keeps matching until it finds a byte not matching its defined characters. This happens at the second comma (just after bob), where the engine considers the [a-zA-Z0-9]*:uname matcher complete and takes the next one: ','. Again, it tries to match it to the byte at the current position and succeeds.

Now the data pointer is advanced to the next byte, the pattern iterator is reset, and the cycle continues with trying the first matcher of the pattern against the currently pointed data. This continues until the end of the input data.

If the engine encounters data for which it is unable to find a match, it resets the pattern iterator, marks this byte as unmatched, and moves on to the next byte. This continues until a match is found or there is no more data. Eventually, the following structured data is the output: