Davis Security Score (DSS) is an enhanced risk-calculation score based on the industry-standard Common Vulnerability Scoring System. Davis AI is designed to provide a more precise risk-assessment score by considering additional parameters like public internet exposure and whether or not reachable data is affected, and if so where.

How DSS is better than CVSS

Virtually all security products use the CVSS Base Score to set the severity of security vulnerabilities. CVSS was designed to be risk-averse, which means that, for any given vulnerability, the assigned score assumes the worst-case scenario. The CVSS specification does allow for some modifications based on environmental influences, but this is usually not factored into the risk score calculation, which leads to many high or critical problem scores that the user needs to handle.

DSS is more accurate: Davis doesn't assume the worst-case scenario. Instead, Davis adapts the characteristics of the vulnerability to your particular environment, taking into consideration its structure and topology, and advises you as to which elements are prone to errors and how to handle security issues. With Davis AI, you can find out if the affected entity is reachable from the Internet and if there is any data storage in reach of an affected entity.

DSS makes you more efficient: By including additional parameters in its analysis, Davis is designed to leverage data to more precisely calculate the security score and predict the potential risk of a vulnerability to your environment. By reducing the score of vulnerabilities that are considered less relevant for your environment, you gain time to focus on the most critical issues and fix them faster. 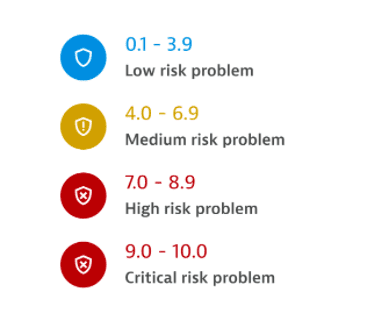 Davis calculation starts from the base CVSS Score, and takes into consideration metrics pertaining to

To influence the security score of a third-party vulnerability based on the public internet exposure, Davis uses the Modified Attack Vector (MAV) metric. This metric reflects the context by which vulnerability exploitation is possible.

To influence the security score of a third-party vulnerability based on reachable data assets, Davis uses the Modified Confidentiality (MC) and Modified Integrity (MI) metrics. These metrics reflect the actual accessibility of a reachable data asset to an affected service.

The final score is calculated based on the previous two results. 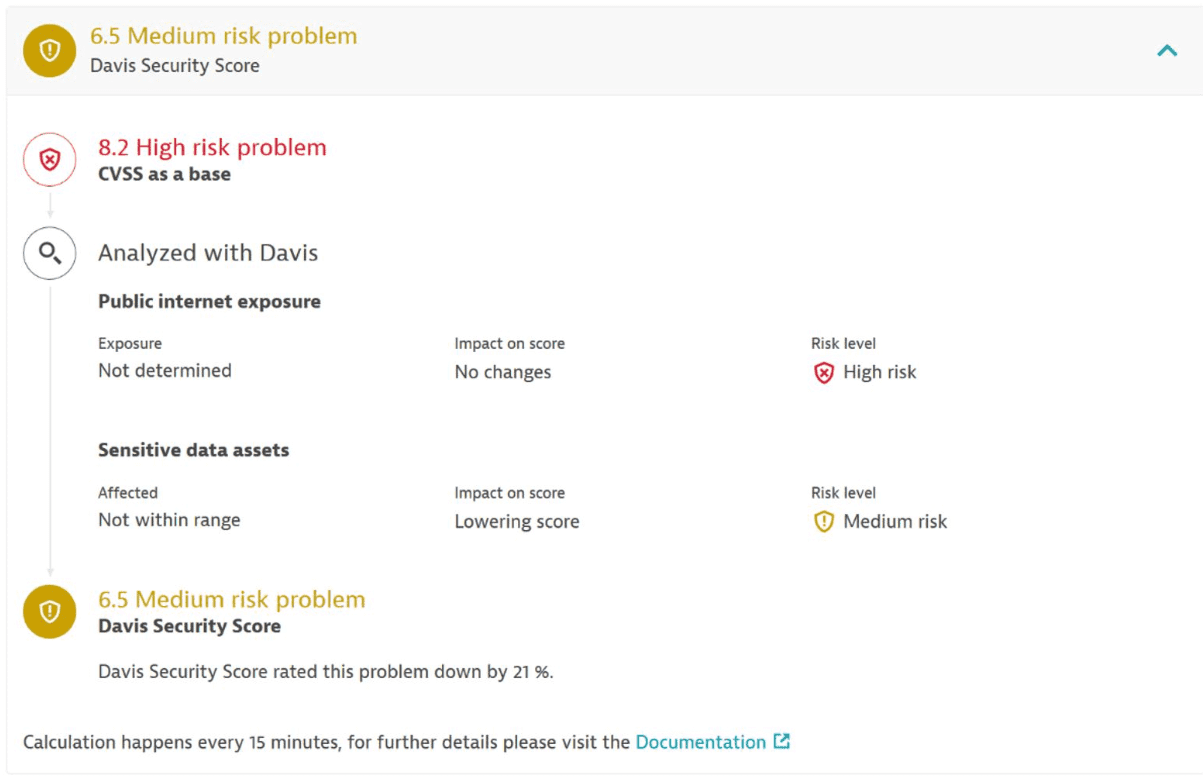 How is the score calculated if a third-party vulnerability has more affected services?

Davis modifies the scores on the service level. If a vulnerability has more than one affected service, Davis uses the highest score.

In which cases does Davis raise the final score?

Davis never raises DSS higher than the base CVSS. The values for public internet exposure and reachable data assets can only lower the score or not affect it at all.