In this example, NAM monitors a website at the front end and the back end of the data center to get a complete picture of the performance delivered by all services that support the pages that are served to the website users.

For simplicity, the NAM Probe attachment points are represented in this example by single NAM Probes because the purpose of the figure is to indicate the options for choosing the placement of the attachment points. However, in a specific deployment, any or all of these may be implemented using multiple devices. The actual configuration depends on the volume of the traffic to be monitored at each stage, but, for a large site, this is a possible example. For this example, one such point is shown and expanded as using a Gigamon switch. An alternative is to use two NAM Probes that are configured for load sharing.

Note that the numerical examples given below assume the use of multiple NAM Probes. 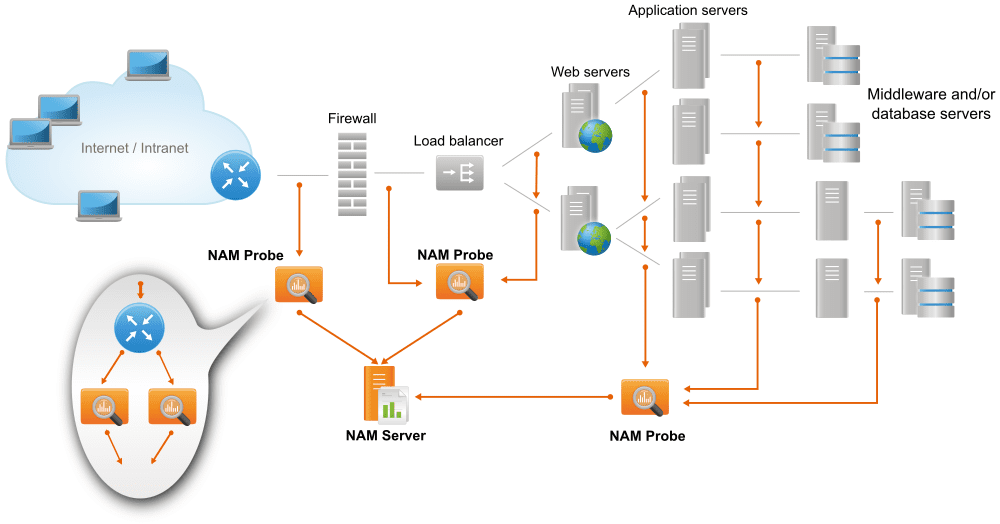 The website serves hundreds of thousands or millions of users grouped into the top 250 ISPs who access hundreds of URLs on dozens of web servers. Website users load nearly 20 million pages daily. Traffic levels are of the order of 2 Gbps, with a 25% SSL component, 3 million operations per day, and with approximately 175 K users per day and nearly 1 million sessions.

The following estimate is for the initial connection point before the fire wall. A full sizing exercise requires estimating all of the NAM Probe attachment points and summarizing the results for the final design.

After comparing the expected traffic levels with the capacity limits for HTTP/HTTPS traffic, it is estimated that two NAM Probes are needed at the initial attachment point before the fire wall. For this purpose, use a Gigamon switch with load sharing functionality or use the NAM Probe load-sharing feature. For more information, see NAM Probe capacity considerations. Similarly, assess the viability of deploying multiple NAM Probes at other attachment points.

Do not plan to use single-user recognition, but aggregate users by using ASN aggregation and individual user counting. If single-user details are required, use the “user activity details on demand” feature. For more information, see Planning NAM Server deployment.

Assuming 1 M sessions per day, plan to keep detailed 5-minute data stored for three days. In addition to that, plan to keep 30 days of one-day roll-ups and 12-months monthly roll-ups.

This estimate is only for the initial attachment point. If estimates for back-end tier analysis cause this value to be exceeded, add NAM Server machines.