This example illustrates monitoring the corporate backbone of a large enterprise.

For simplicity, the NAM Probe attachment points are represented in this example by single NAM Probes because the purpose of the figure is to indicate options for choosing the placement of attachment points. However, in a specific deployment, any or all of these may be implemented using multiple devices. The actual configuration depends on the actual volume of the traffic to be monitored at each stage, but for a large site this is a possible configuration. In a specific deployment, you can implement load sharing between NAM Probes using a switch or by configuring the NAM Probes for load sharing.

The numerical examples given below assume the use of multiple NAM Probes. 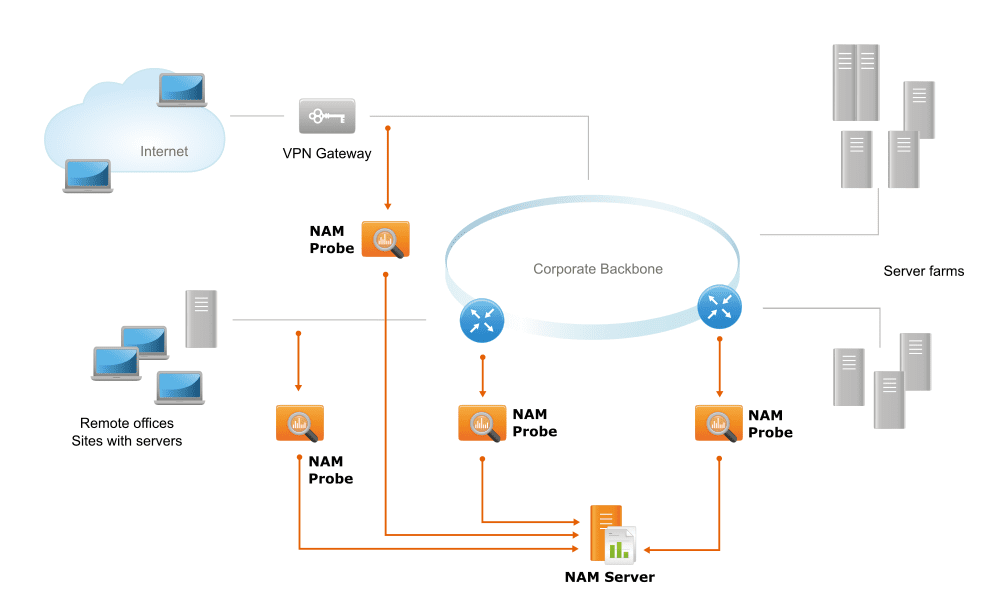 From 60,000 to 100,000 LAN/WAN users who access hundreds of applications on hundreds to thousands of servers and nearly 2 million sessions daily. The traffic volume reaches 4,000 Mbps with a large SAP GUI component.

After comparing the expected traffic levels with the capacity limits for SAP GUI traffic, it is estimated that two NAM Probes are needed at that point. For this purpose, you can use a Gigamon switch with load-sharing functionality or use the NAM Probe load-sharing feature. For more information, see NAM Probe capacity considerations.

Plan for detailed 5-minute data to be stored for two days, totaling 4 M sessions in the database. In addition, plan to store 30 days of one-day roll-ups and 12 months of monthly roll-ups.