NAM is a passive listening APM system built on top of our sniffing probe that analyzes the wire communication in your data center and feeds the processed data to the report engine.

All you need to do is to mirror the traffic to our box, install the report engine and you immediately gain insight into your enterprise application and services. Could my app be faster? Do my users experience problems? What's causing them? Is it the network, the database, or the app itself? With NAM, the answers are easy and you know them even before the users start to report their problems.

We tailored NAM to monitor the performance of enterprise applications. We help troubleshoot your business applications delivered through Web, SAP, Citrix, Siebel and other industry standard technologies.

No agents needed. NAM does not consume any resources of your apps. All we do is listen. 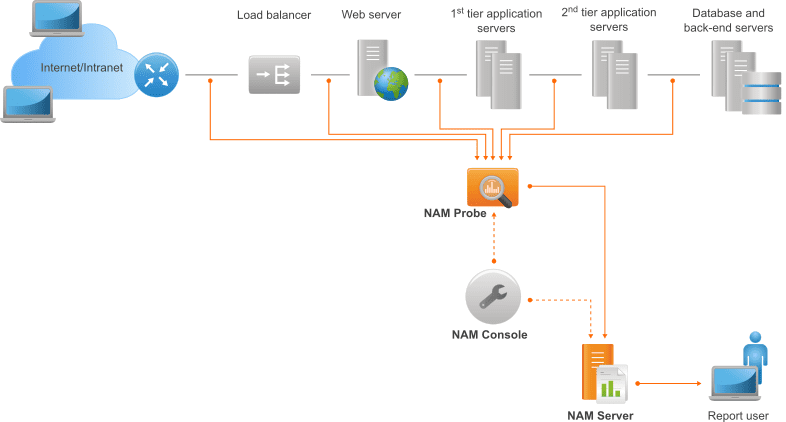 The NAM Probe is a network device that analyzes network traffic and feeds the application and network performance data to report servers. However, the NAM Probe is much more than a network monitoring tool. It understands the language your applications communicate in.

The NAM Probe is perfectly aware of the type traffic it monitors, which allows it to apply specified rules and intelligence when calculating the performance of your app. The NAM Probe can detect operations and calculate a number of performance metrics at a granularity of a single one. Operations are exchanges of information with a recognizable question-and-answer dialog, for example the page loads, database queries, SAP T-codes.

Operations may be slow for any of a number of reasons. The NAM Probe helps you with this, too. We can isolate the domain of the problem and tell you whether it's the app design itself, the network, the data center, or some client/third-party influence. We also report on your app availability and point to the prominent type of failures affecting it.

The main reporting component for NAM is the NAM Server.

With its built-in web-based report management interface (DMI), all the report building capabilities of the NAM Server are available to you. You can slice and present your monitoring data the way you need it, build the reports, use all the available visual aids, create charts and mix multiple report sections on the same page. The reports can have a hierarchical structure with contextual drilldown, sibling, and parent reports.

The NAM Console is a centralized, web-based configuration component enabling you to control the whole NAM ecosystem from a single control point. You can use it fine-tune and customize the configuration of your sniffing probes and control the NAM alert system. You also use it to manage access and authentication for NAM users. Tweaking the system to your individual needs (such as user names, error strings, or other entities specific to your environment) is easy with wizards. Use the built-in traffic recording tools, preview the captured traffic traces, and let it create monitoring rules on the spot.

Number of components needed in your deployment:

See Supported OS and SQL versions and Hardware Recommendations for details on requirements.