You can view the configuration and connection status of a farm and perform basic actions for every component within a farm.

Note: Synchronization occurs only after all components have been upgraded.

If your maintenance tasks require you to stop the report servers, the recommended order of stopping and starting your deployment is as follows:

Before you begin stopping individual farm components of your deployment, make sure that none of the components are performing automated jobs such as maintenance or nightly tasks.

The starting order of all your components would be reversed however, recommended order of starting report servers in a cluster is the same as for stopping: 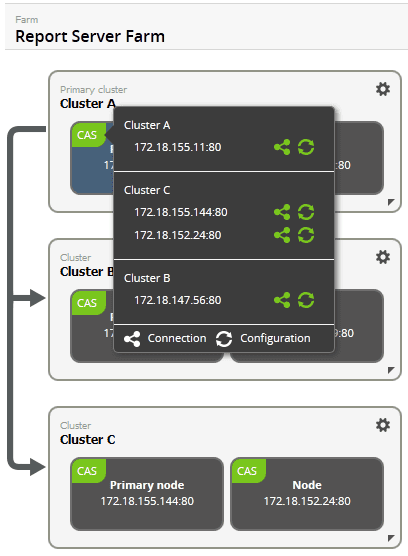 The only administrative action you can perform that affects the entire farm is to rename it. Click the default Farm 1 name to rename the farm. 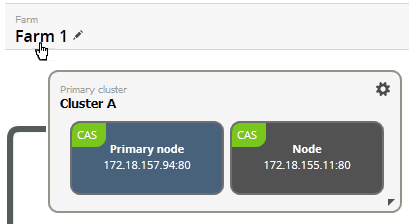 To completely remove a farm, delete all clusters belonging to that farm one by one.

The patch description should contain the order in which the patch must be applied in farm deployments. If no such information is provided, the general rule is

Similarly to the renaming of the farm, you can click on the cluster name and rename the cluster. Click the

icon to perform one of the basic cluster operations:

Enables you to select an additional node from a list of standalone report servers and add it to this cluster.

Enables you to define options that affect all nodes assigned to the edited cluster. For more information, see Cluster Configuration.

Enables you to remove the cluster and all of its nodes from the farm. All nodes attached to a deleted cluster automatically become standalone report servers.

Report servers removed from an active cluster retain the data and options that were set while operating within a farm.

Each node is capable of three basic actions: add failover, delete node, and reset node. All secondary nodes also include an additional option of setting the selected node as primary.

Use this option to select a standalone report server of the same type and attach it as a failover server. For more information, see Report server failover overview.

Use this option to remove this node from the cluster and from the farm. This action resets the node as a standalone report server, but it retains the data and options used while operating within the cluster. Removing a node from a monitoring cluster creates an incomplete data set because the analysis is based on equal distribution of monitored traffic between all nodes within the cluster.

If removed node did not have a failover server, the historical data stored on that node will not be available for reporting and will be missing from any historical reports generated by that cluster.

When a node is removed from a cluster, the load is not redistributed until the next execution of the nightly tasks and all historical data will remain with that node. It is not possible to preserve the historical data stored on the node if you plan to permanently remove that node from the cluster.

Use this option to reset the node, which purges all data from its database and prepares the node to be synchronized within the cluster.

Resetting a node deletes all data in the report server's database. We recommend that you reset a node only if it has previously been part of another cluster, or has been monitoring traffic as a standalone report server and contains monitoring data.

Each failover node is capable of two basic actions: Swap failover with primary and Delete failover.

You can use this option to remove a failover node from its primary node. This action changes the failover node's role to a standalone report server, but it retains the data and options it used while operating as a failover node.