In earlier releases, a number of slave servers analyzed and reported to a single master server. This legacy concept differs significantly from a currently supported farm-cluster-node hierarchy.

Note on product and component renaming

The current NAM Console is able to read and display the legacy farm definitions, but, because of the new farm concept implementation, legacy farm components are converted and their place in farm concept is changed.

To take full advantage of the new farm-cluster-node hierarchy and any automatic configuration features associated with it, you should consider a database reset when migrating a farm deployment from a previous version to the current version. While it may be possible to migrate from the previous farm structure to the new hierarchy without a database reset, the definitions, configurations, and historical data may not be compatible with the new scheme.

The preferable upgrade procedure involves upgrading the following components in this order:

Upgrade all of the report servers participating in the farm.

Upgrade all of the data sources participating in the farm.

If needed, add all of the components to the device list in the NAM Console.

After upgrade, there is no need to perform any post upgrade reconfiguration. The upgrade applies the new farm concept in the following way: 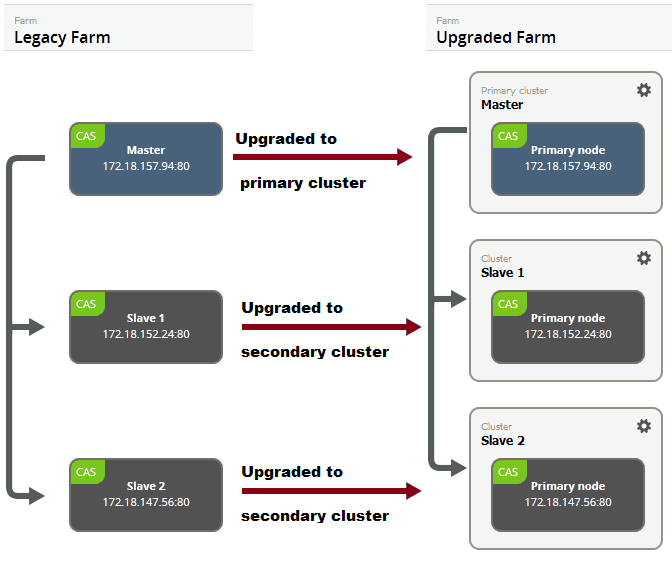 While all of the legacy farm definitions will upgrade to the new farm-cluster-node hierarchy automatically, some upgraded farm deployments should be restructured to take advantage of the new farm concept.

Consolidation of the nodes into one cluster involves removing a node from a single node cluster and adding that node to the load balancing cluster. This involves a step where you can select a database reset for the node that you are adding. If the new node has different site and user option settings from the primary node's settings of the edited cluster, that node will be automatically marked for a database reset in the Clear nodes database screen of the wizard. Since this action is required, the marked option will be disabled. Both, Site options and User options of the NAM Server Configuration must be matching the primary node. If you are tracking user IP addresses from selected ranges and, these ranges differ between the primary node and the node being added, we recommend that you remove the User IP address ranges in the configuration options of the node that is being added. For more information, see NAM Server Configuration. 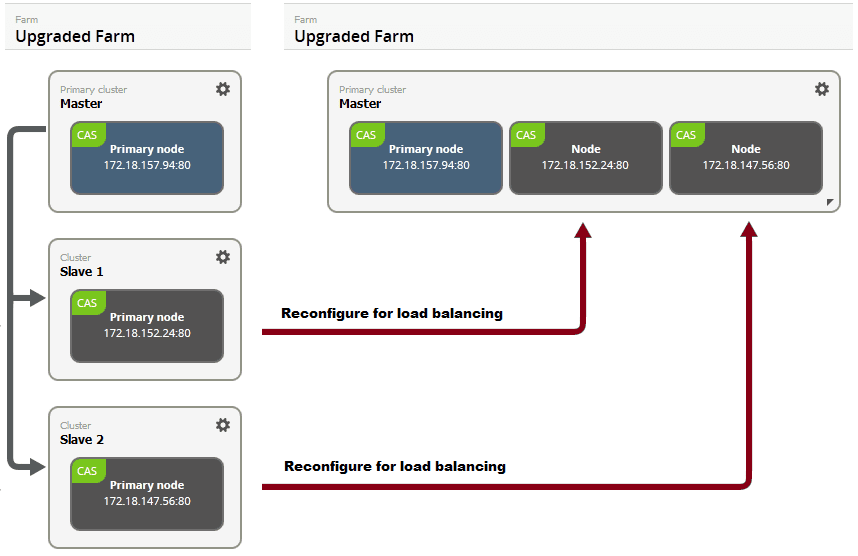 In your legacy deployment, if you were using the client and server range settings or application and service names or to load balance the incoming traffic, we recommend that you review these settings, as they may cause a portion of incoming traffic to be ignored.