The backup procedures described below will not back up your private SSL keys used for OpenSSL decryption.

Log on to the NAM Probe as user root .

Save the existing NAM Probe configuration.

There are several other ways to back up directories. Regardless of the method you choose, be sure to preserve the user rights for the directory and files that are backed up. This is required because the files located in the config directory have different owners.

Issue the ndstart command on the Linux command line to restart the NAM Probe software.

This procedure is designed to export vital NAM Probe settings and monitoring configuration for diagnostic purposes. While it can be used to regularly back up settings and configuration, there is no simple way to restore the information from this type of backup, so it should be used for preserving the NAM Probe configuration snapshot.

Click on the NAM Probe you want to back up and select the Export diagnostic information option from the context menu. 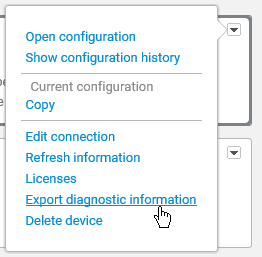 Optionally, you can include a fragment of monitored data. Using the begin and end settings, you can specify the time range covered by the included fragment. This option is specifically useful when diagnosing problems related to monitoring data.

The exported diagnostic information files DO NOT contain any sensitive information such as SSL keys. For all NAM components you can specify and control any additional information that you wish to export for the particular component such as:

You should have available the following:

The following example assumes that the configuration directory was archived without including the full path using the tar command.

To restore your backup configuration:

Log on to the NAM Probe as user root.

Restore the NAM Probe configuration from the archive.
Choose the appropriate restoration method, depending on whether you saved the back up to a disc (CD or DVD) or on a remote backup machine.

Regardless of the method used to back up the NAM Probe configuration, be sure to preserve the user rights for the directory and files that you restore. This is required because the files located in the config directory have different owners.