Use the Probe statistics reports to review capacity-related statistics for one of the NAM Probes connected to this NAM Server.

To select the NAM Probe on which to focus these reports, open the Capacity tab and select one of the listed NAM Probes in the NAM Probe IP address column.

On the Capacity tab, select a NAM Probe from the list to display the selected NAM Probe's licensing state.

NAM Probe licensing and capacity are discussed in detail in the licensing guide.

Use the Packet stats report to verify the general state of capture ports on the selected NAM Probe. Information is gathered directly from the NIC driver operating on the NAM Probe.

The calculation of analyzed traffic is performed in several stages, gradually excluding the irrelevant statistics:

In default NAM Probe installations, non-TCP/UDP packets are not part of this process and are never counted when the number of analyzed packets is given. Non-TCP/UDP traffic increases the amount of analyzed traffic only if you enable the monitoring of the default software services. 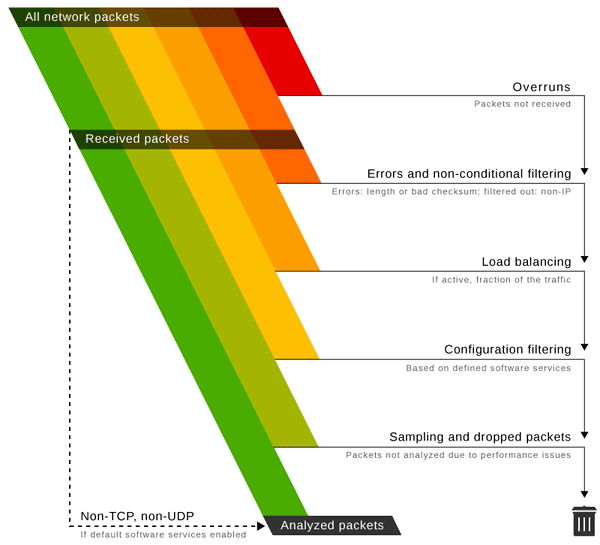 Use the Interface utilization tab to review the interface statistics on the selected NAM Probe.

Use the NAM Probe processes CPU stats tab to review, per NAM Probe, and per CPU on the NAM Probe, the total CPU usage (percentage) over the selected time range.

In addition, each chart shows a breakdown of the CPU usage according to the following.