Examples on this page include downloadable session files containing the sensors used in the examples. In some cases, the sensors include more that what is needed to capture required PurePath data. At a minimum, the following should be captured:

The following graphic shows a process called QueryBooksByAuthor that implements a WebService.

Transitions between nodes in the process flow are labeled “[srcNode]2transition2[dstNode]”. 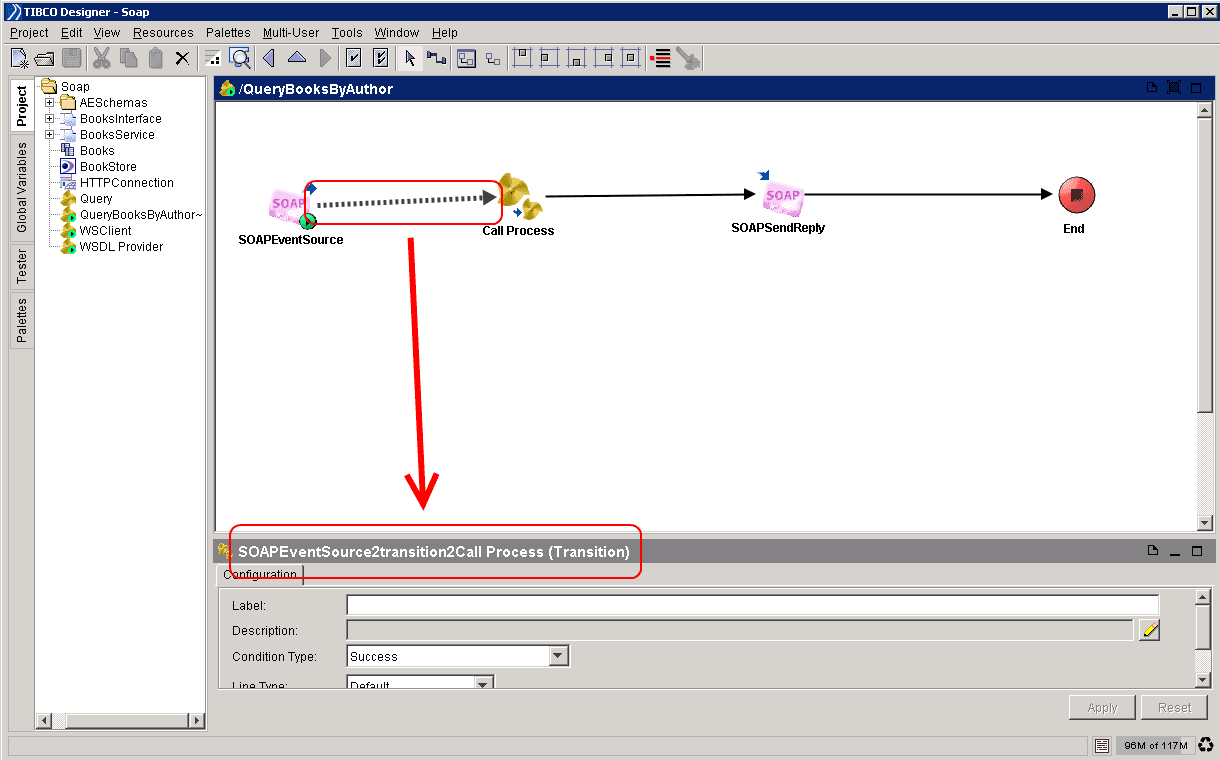 The Call Process node calls out to the Query Process shown below.

The following screenshot shows what can be captured using AppMon: 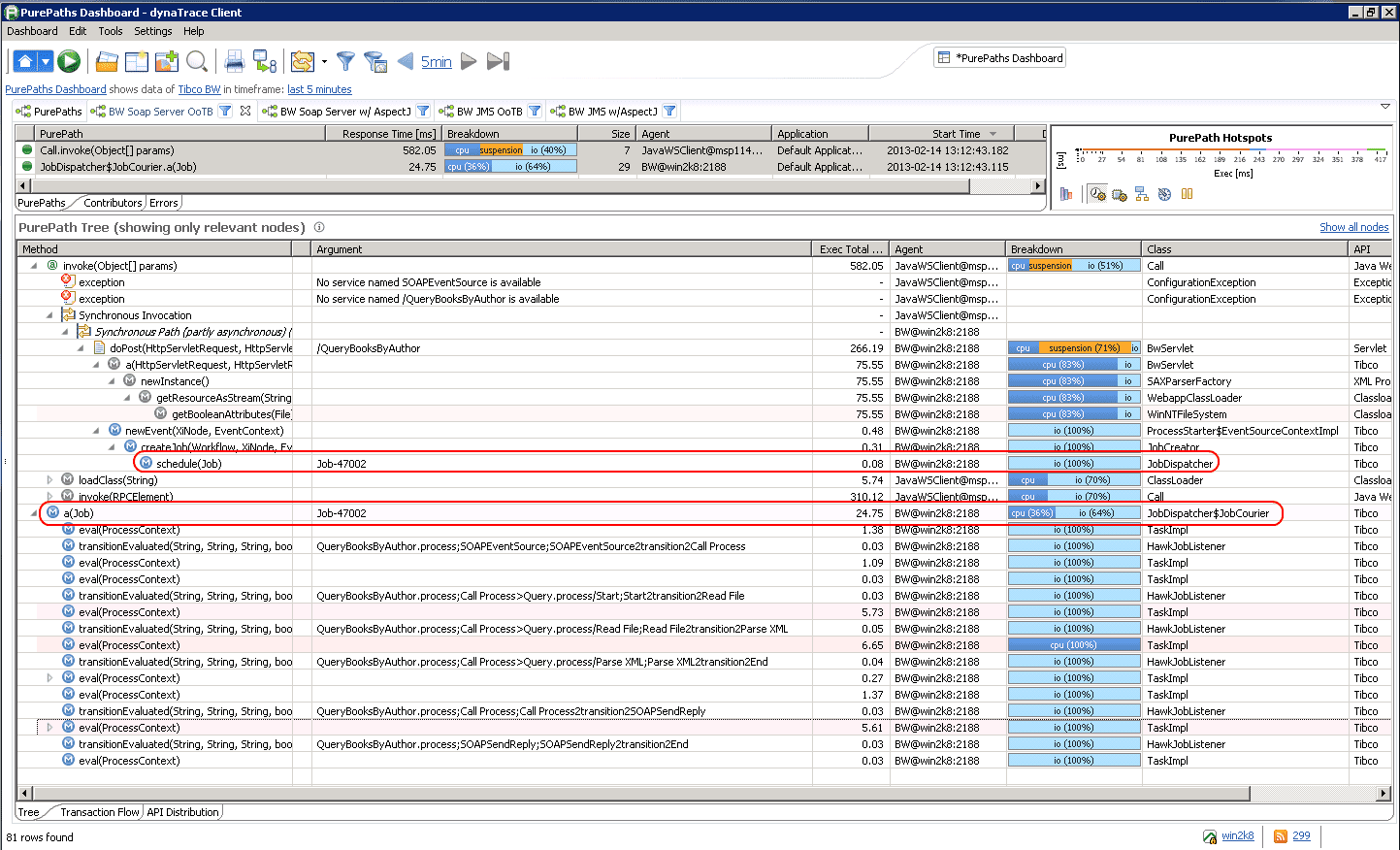 For the next example, download the following AppMon Session File: bwsoapserver-ootb.dts

This example shows two disconnected PurePaths. Manually placing some sensors can capture the Job Names (Job-47002) from both PurePaths. However, you must place two different sensors, which means a single Business Transaction (BT) can't bring these PurePaths together.

Using AspectJ to weave in the ADK calls can connect these PurePaths. Below is a screenshot of what the PurePaths looks like when this is done. 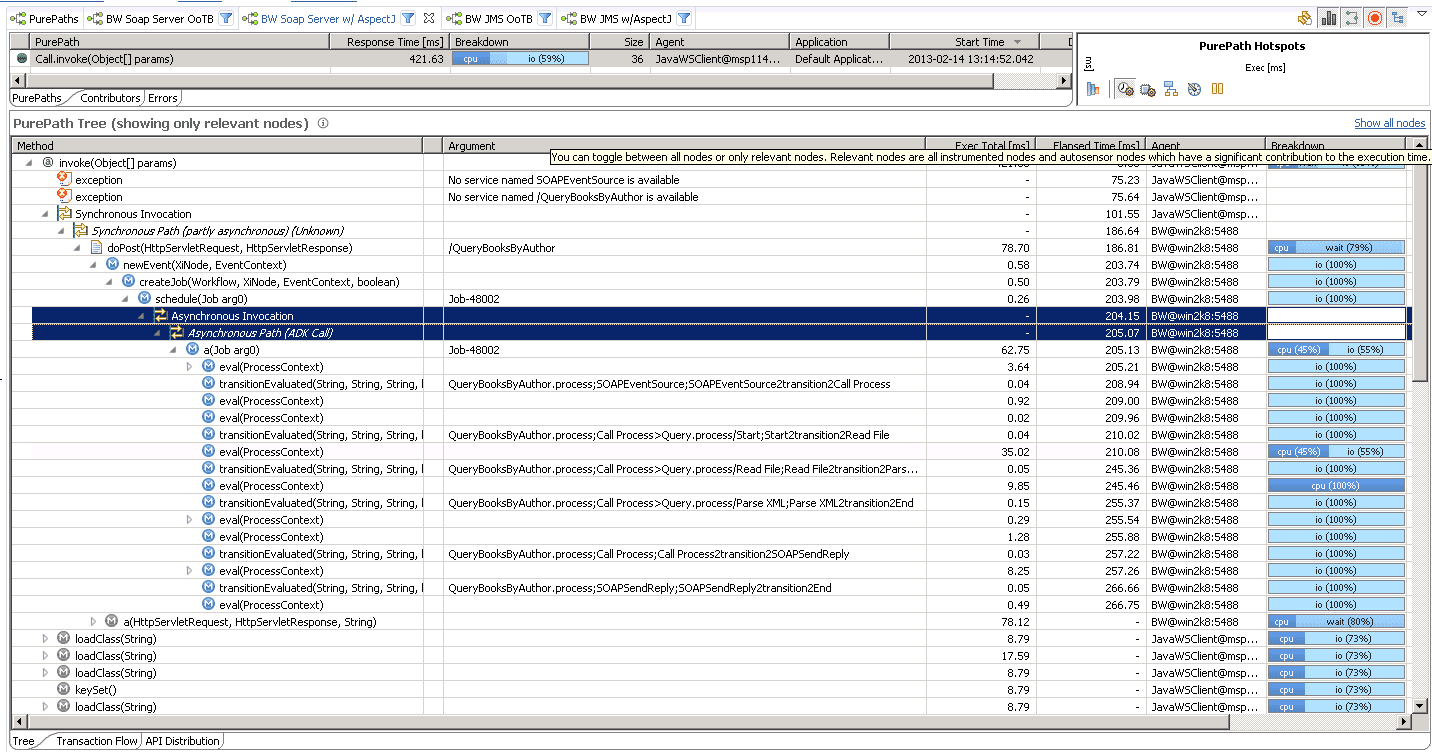 The following AppMon Session file bwsoapserver-with-aspectj-adk.dts shows these two PurePaths are now joined together into a single PurePath.

The following screenshot shows the code for bwtagging.aj aspect. 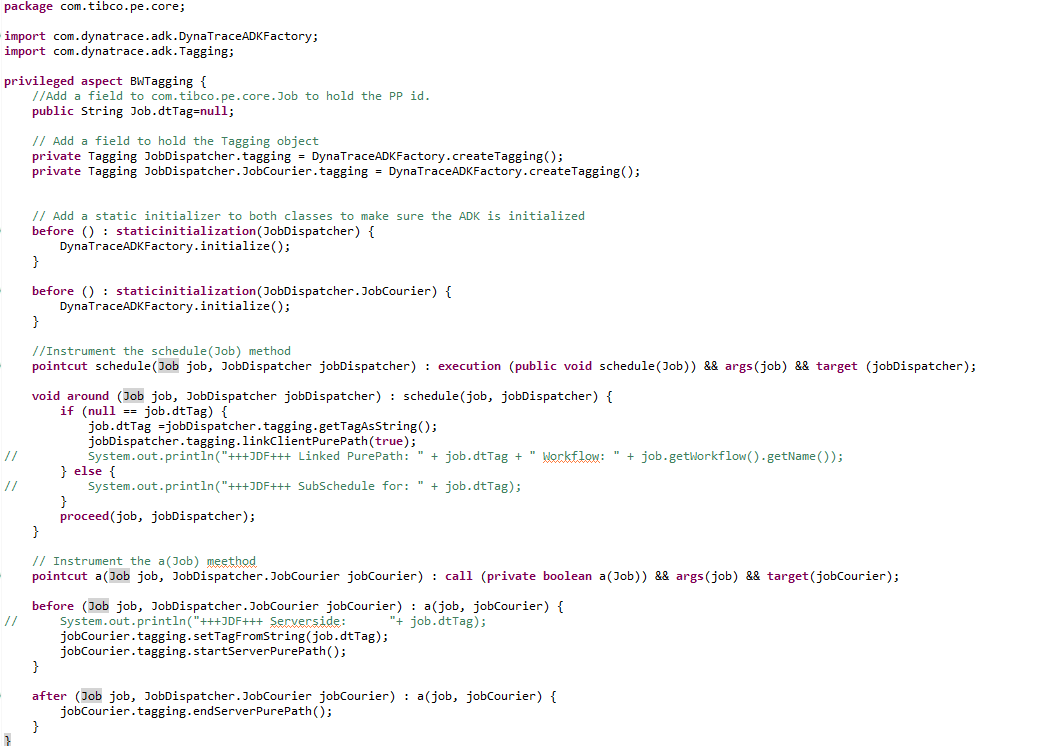 The following screenshot shows a process that listens to a queue, echoes the message back on the response queue and then writes to a log file.

AppMon shows the following disconnected PurePath for this process.

The Aspect previously defined joins the PurePaths running in BusinessWorks together, but the PurePaths are still disconnected from the JMSClient. It appears BusinessWorks uses methods to handle JMS that isn't currently tagged in AppMon. Adding another Aspect to extract the AppMon PurePath ID from the JMS property and passing that to the ADK connects the PurePaths, as shown in the following screenshot.

It also shows in this AppMon Session file. bwjms-with-aspectj-adk.dts

Here's the code to the bwjmstagging.aj aspect: 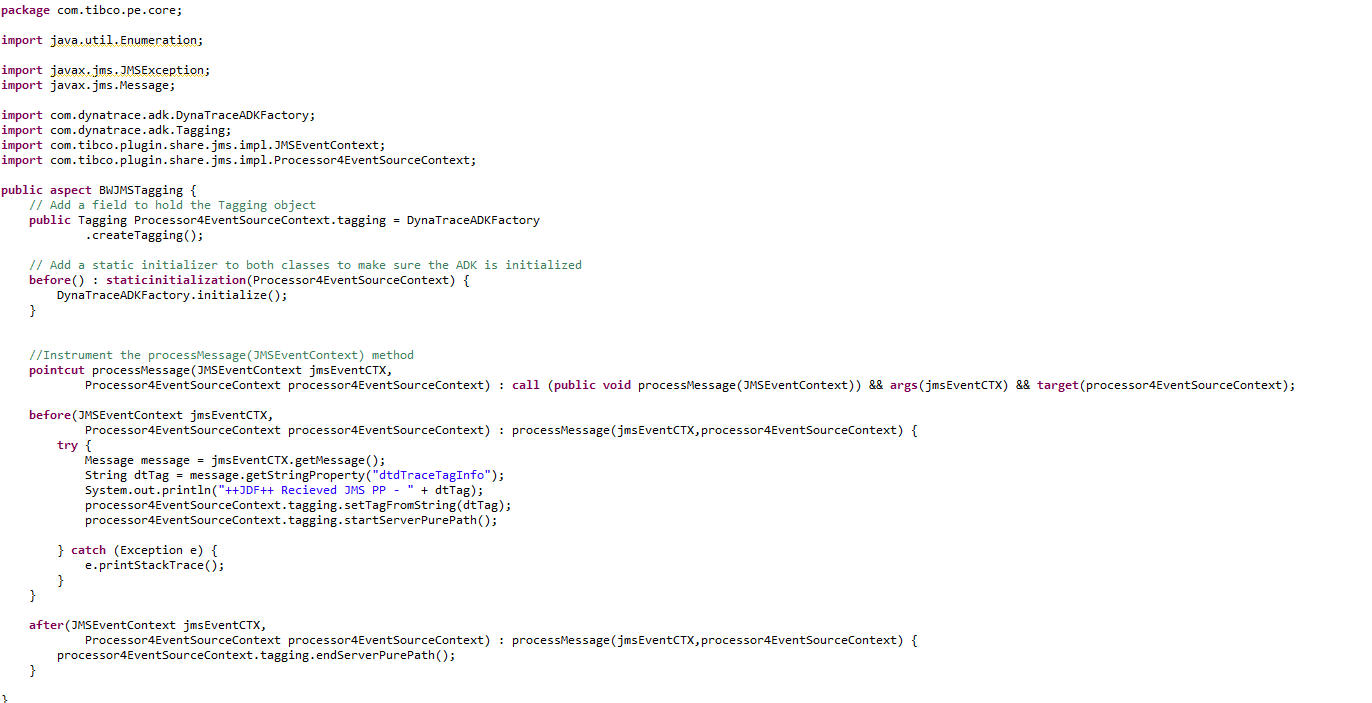 The following shows a BusinessWorks process that makes a SOAP request every 60 seconds to another process detailed in Example 1:

This screenshot shows this in AppMon. With some custom sensors, and four separate PurePaths.

These also display in this AppMon Session File bw-soap-ootb.dts

Using AspectJ, you can use these fixes, which would give two PurePaths. But an additional fix is needed to connect the outbound HTTP request that is part of the SoapRequestReply action. 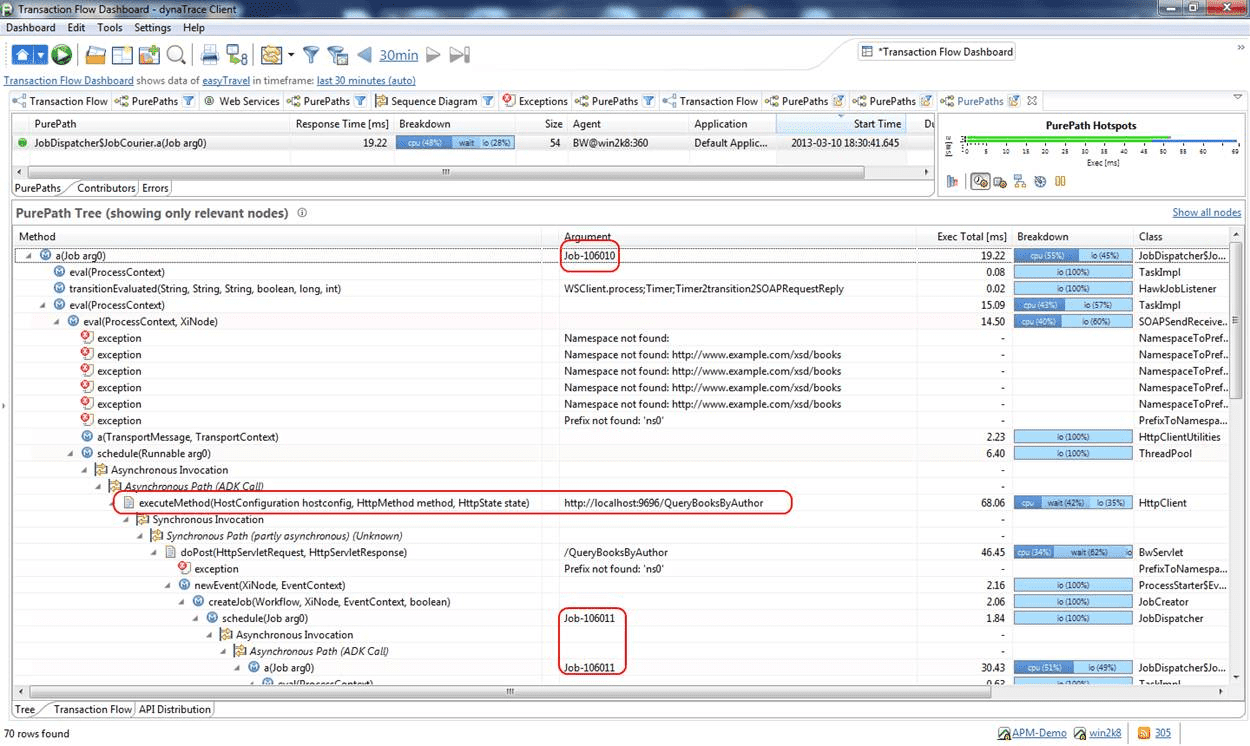 This is also shown in this AppMon Session file bw-soap-aspectj.dts

The outbound executeMethod is now connected to Job-106010. When the call happens to the SOAP service (Job-106011) it is also connected in the PurePath. 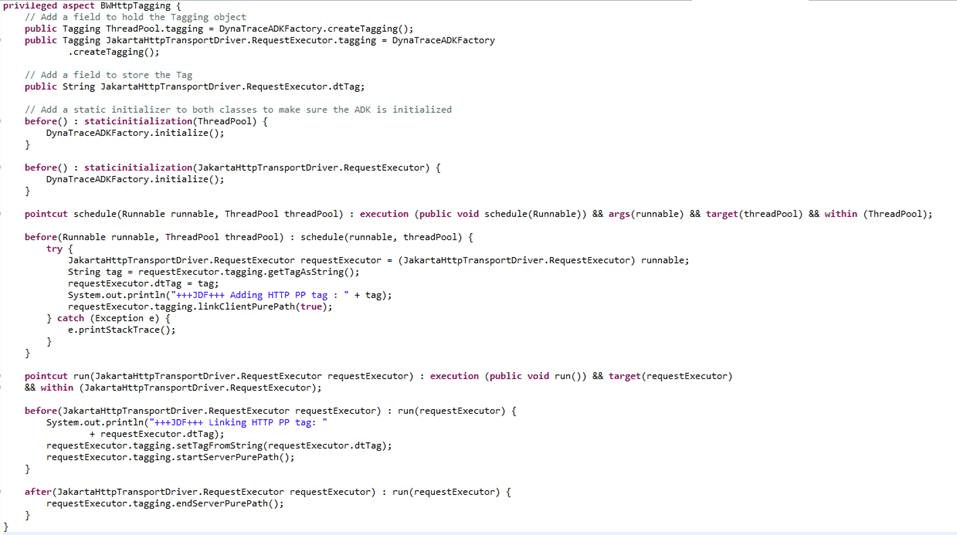 Instrument BusinessWorks with AspectJ and ADK

The following is an example added the following at the bottom of the BusinessWorks' .tra file.