What are Agent Groups?

Use Agent Groups to automatically assign Agents to groups that share the same configuration settings for Sensor Placement, Sensor Configuration, and Measure Subscription. Use Agent Mappings to map Agents based on name or host.

What are the benefits of Agent Groups?

AppMon is initially deployed and configured in a test or pre-production environment. These environments are similar to their production counterparts but with fewer SUDs and fewer Agents: two application servers in preproduction versus four in production.

When AppMon is deployed in production, the AppMon configuration must be migrated. Use a layout of Agent Groups and Agent Mappings to simplify this process. The production Agents are dynamically mapped to Agent Groups as they connect to the AppMon Server. They share the same Sensor Placement and Sensor Configuration. The Measure Subscriptions are shared on-the-fly with zero configuration.

The Agent Mapping specifies which Agents belong to an Agent Group based on Agent Name and optionally the Agent Host. Additionally, you must configure an alias and use it throughout the AppMon Client for user-friendly visualization, since Agents are similarly named to the SUD or infrastructure, for example node42 or prod-100-xserver.

It is important to understand how Agents are mapped to Agent Groups and assigned to System Profiles. Consider the following example: 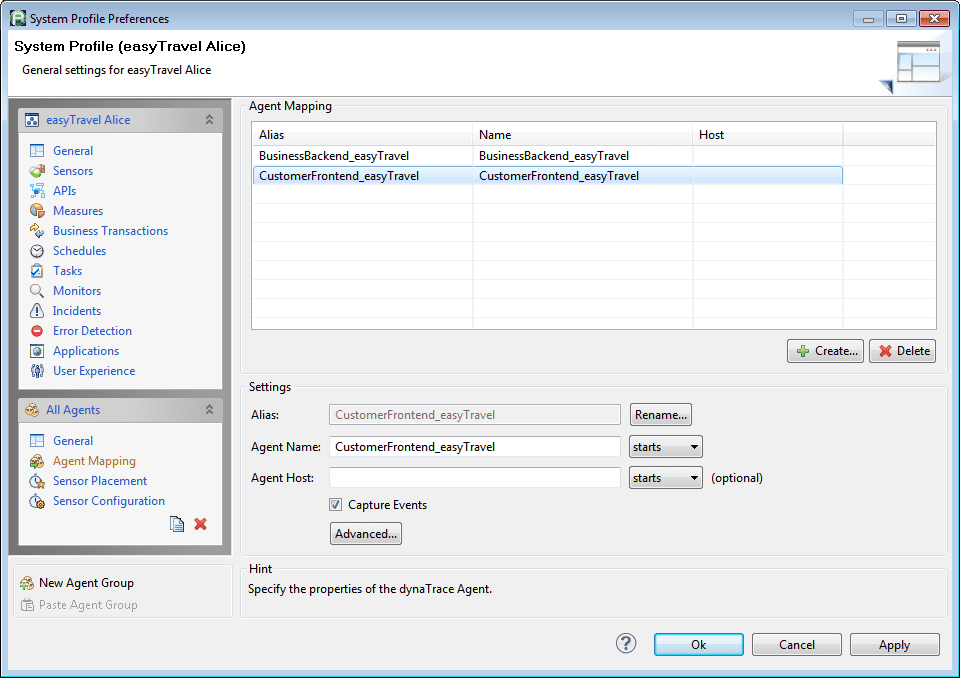 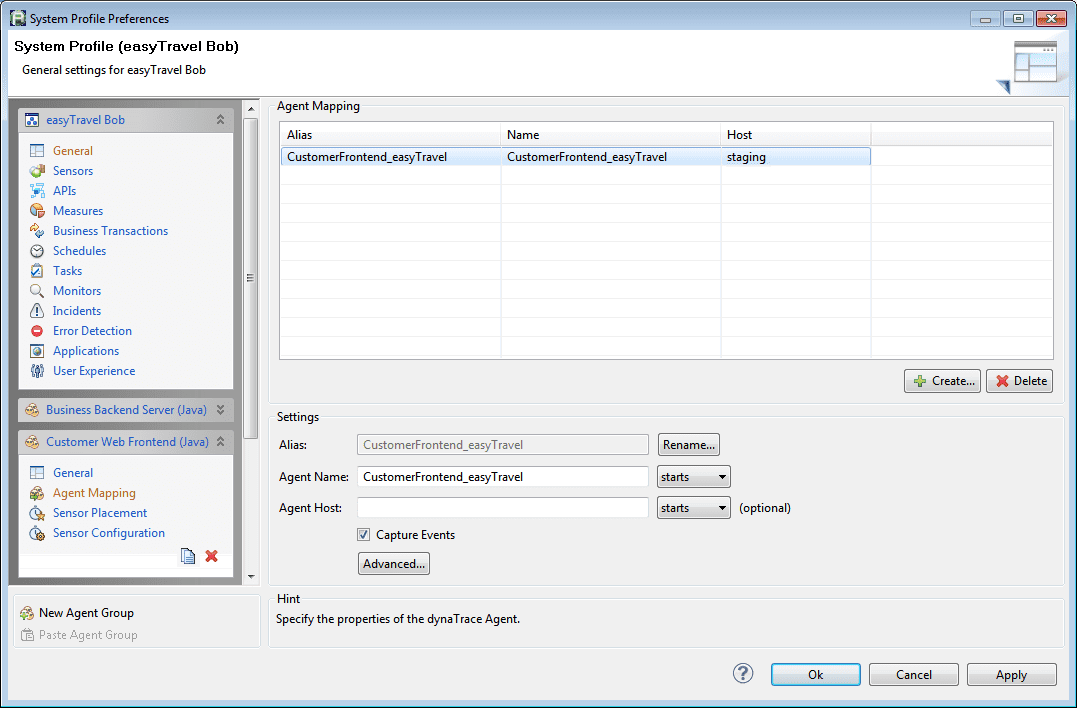 Putting it all together

When an Agent initially connects, the AppMon Server (Collector) iterates over all System Profiles in alphabetical order. Then it evaluates all Agent Groups and their respective Agent Mappings one after another, from top to bottom (as they have been defined), preferring Agent Mappings that match both name and host over name-only matches.

Let's deploy both System Profiles easyTravel Alice and easyTravel Bob to the same AppMon Server and examine the mechanics when various Agents connect:

It neither matches to any of easyTravel Alice's nor easyTravel Bob's Agent Mappings; it is not associated with any of the System Profiles' Agent Groups. Nevertheless, the Agent shows up in the Agent Overview and System Overview dashlets of all System Profiles to increase the user awareness because this typically indicates misconfiguration. After appropriate Agent Mappings are created, the Agent must be restarted.

Multiple System Profiles with similar Agent Mappings are confusing. In big deployment scenarios, use meaningful names for all Agents and map them into clearly defined Agent Groups. You cannot do this if you copy or import a System Profile.

What happens to assigned Agents?

This guards against incorrect configuration, but you have to restart the Agent to match to a different System Profile.