Log4Shell, a zero-day vulnerability affecting the popular Apache package was made public on December 9, 2021. The National Vulnerability Database (NVD) knows the Log4j vulnerabilities as CVE-2021-44228. It results in remote code execution (RCE) by submitting a specially composed request. This means that an attacker with control over a string that gets passed to the log4j 2 logger can trick the application into requesting a resource from a server under the attacker’s control, then load it, and then execute it. In summary, the Log4Shell vulnerability allows an attacker to instruct the vulnerable system to download, and subsequently execute, a malicious command.

As organizations work to find the usage of this library in their applications, they should focus on three criteria to prioritize the fix in their environment:

Given that this vulnerability allows a malicious attacker to execute any command on a vulnerable Java process, it’s crucial to prioritize fixing it in Java processes that are accessible directly from a browser, mobile device, or application programming interface (or API) call.

The screenshot below confirms that Dynatrace Application Security detected the Log4j 2 vulnerability in the monitored deployment, and filters on public-facing internet connectivity (as depicted in the blue box).

As depicted below, a closer look at this detected vulnerability shows more context and details of the exposed services. In addition, the image puts everything in context, detailing the entire process, from the web application to the database (discussed in the next section). OwnerResource (highlighted) is the service running on the JVM loading the vulnerable log4j 2 library.

The screenshot below shows sensitive data assets are within reach of the vulnerable Java processes. 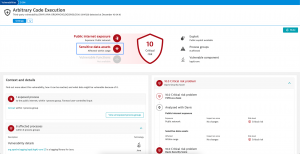 An overview of the databases used by the vulnerable Java processes are highlighted in the following screenshot. 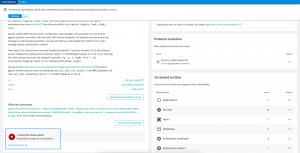 For better prioritization, the CVSS standard allows refining the base score with environmental factors, such as public internet exposure and sensitive data access. To make that step much easier and effective, automatic calculations, like the Davis Security Score, can be used.

The examples below show two vulnerabilities with an initial critical risk. Environmental score adjustments that transparently describe the actual risk in a deployment enable responding teams to stay focused on the most critical occurrences in their environments.

The following screenshot shows what web applications are connected to the vulnerability. 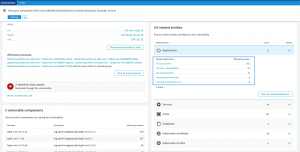 In other words, as depicted below, a live topology model, such as the Smartscape, allows for identifying all affected web applications through simply traversing the graph from the JVM which loaded the vulnerable library. 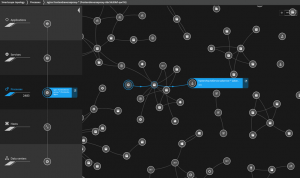 For many organizations around the world, time is of the essence to mitigate the Log4Shell vulnerability in the Apache log4j 2 library. The best approach to remedy this issue is to prioritize the Java processes that are exposed to public networks and can reveal sensitive data to malicious attackers. 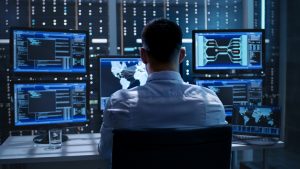